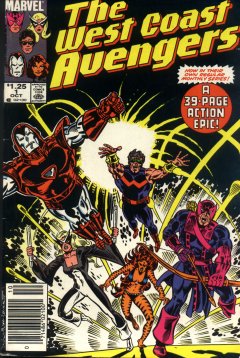 The West Coast Avengers first appear in 1984 in a four-issue published from October to January 1985. The series was written by Roger Stern, and drawn by and . This was followed by a 102-issue series of the same name that ran from October 1985 to January 1994. The series was written by (with some fill-in issues covered by writers such as ) with art by and . This creative team left as of issue #41, and from issue #42 to 57 the title was written and illustrated by . The title was also renamed "Avengers West Coast" as of issue #47, dated August 1989. From issue #58 the creative team varied, although writers and and artist completed the majority of the run.

After a trip to to investigate a report on Pym's first wife, the Wasp; and the join the team. Former Avenger Mantis makes a brief appearance and Moon Knight leaves the team. Rogue agents of the government, manipulated by the er , then abduct the Vision and dismantle him. The Avengers recover the parts, and Dr. Pym rebuilds the Vision but with a chalk-white complexion. Wonder Man, however, does not allow his brain patterns to be used again to provide a matrix for Vision's emotions, explaining that the original process, done without his consent, had "ripped out his soul". Although Wonder Man's own love for the Scarlet Witch leads him to feel guilt, he justifies his actions by claiming the Vision was never anything but a copy of him, a claim that a number of other Avengers, including the Wasp, accept. This, along with damage to the Vision's synthetic skin when he was dismantled, results in the synthezoid's resurrection as a colorless and emotionless artificial human. ["West Coast Avengers" #42-44 (March-May 1989)] The unstable is also placed on the team by the US government to monitor the team's activities.A group of odd super-humans decide to mimic the Avengers and become the , while the original Human Torch returns from his own apparent demise. This casts doubt on the Vision's identity, who was previously believed to have been created from the Torch's body. The Vision and the Scarlet Witch's children (conceived via the Scarlet Witch's hex powers) ["Vision and the Scarlet Witch" vol. 2, #3 & 12 (Dec. 1985 & Sept. 1986)] are then revealed to be fragments of the soul of the Mephisto, who had been broken apart by shortly before the birth of the twins. The twins were absorbed back into Mephisto, which temporarily drove the Witch insane. Although Wanda eventually recovers, she and the Vision separate, each operating on a different Avengers team. ["Avengers West Coast" #51-52 (Nov.- Dec. 1989)]

Iron Man rejoins, and the mutant Quicksilver aids the team when the Scarlet Witch aids their father during the period in which she suffers from a mental breakdown. Immortus is also finally confronted and revealed to be the cause of much of the team's misfortune, and is finally defeated. The Scarlet Witch and Quicksilver then leave the team, with becoming a reservist and Spider-Woman and the and joining as full-time members.

The team battle Ultron and his new creation several times, and Hawkeye assumes his old identity of Goliath, also managing to reconcile with Mockingbird. Iron Man and Wonder Man leave the team, and are replaced by (Jim Rhodes, one of the founding West Coast Avengers) and , with the latter acting as a reservist. During a battle with the demons Mephisto and , Mockingbird is killed. Due to constant in-fighting and a general lack of organization, intervenes and disbands the team. Several members of the West Coast team - including a returned Iron Man - are unhappy about the decision and leave to form another team, called . This team, however, has several setbacks and quickly disbands, with the members returning to the main Avengers team.