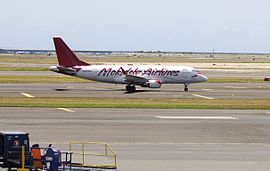 The airline was founded in 1998 as Mokulele Flight Service by Rebecca "Kawehi" Inaba, and was the first airline in Hawaii to be founded by a Native Hawaiian woman. In 2005 it was acquired by Boyer Industries LLC, headed by former baggage handler turned entrepreneur William "Bill" Boyer Jr., who became the airline's CEO.[2]

In September 2006, the airline announced that it had reached an agreement with Mesa Air Group and its go! division, whereby Mokulele would operate Cessna Grand Caravan aircraft to Kapalua, Molokai, and Lanai under the name go!Express. Service began with flights from Kapalua to Honolulu, Kahului, and Kona on April 17, 2007.[3][4] Service began for flights to Molokai on July 21, 2007 and flights to Lanai on October 6, 2007.

In January 2008, the airline reached an agreement with Aloha Airlines to provide cargo service to Molokai, Lanai, and Kapalua under the name Aloha Cargo Express beginning in April using a Cessna 208 Cargomaster.[5] Following Aloha's March 2008 bankruptcy, Boyer indicated that he had an agreement with Aloha CEO David Banmiller to work with the buyer of Aloha's cargo operations to continue the Mokulele-Aloha contract. Boyer also stated that the airline would go ahead with cargo operations under its own name, Mokulele Air Cargo.[6]

In October 2008, Mokulele announced that it had reached an agreement with Republic Airways Holdings to provide inter-island jet service. On November 19, Republic's Shuttle America began operating two Embraer 170 aircraft on flights between Honolulu, Lihue, and Kona under the Mokulele name, with additional aircraft and destinations to be added in 2009.[7] As a result of Mokulele's entrance into markets that complete directly with go!, that airline later announced that it would end the go!Express agreement with Mokulele in April 2009.[8]

In December 2008, Mokulele Airlines announced partnerships with two larger North American airlines. The first, with Alaska Airlines, will allow members of Alaska's Mileage Plan frequent flyer program to earn and redeem miles on Mokulele flights, with a code-sharing agreement hoped for in early 2009.[9] The second, with WestJet Airlines, will provide access to Mokulele's inter-island flights to WestJet's customers, including sightseeing air tours. Each airline will promote the other on their respective websites.[10]

After running into financial difficulties earlier in the year, the airline announced in March 2009 that Republic had taken a 50% stake in the company. Boyer relinquished the CEO position to Republic vice president Scott Durgin, moving to head the airline's sales and marketing efforts. Republic also assumed control of the Cessna Grand Caravan aircraft operated by Mokulele.[11] A few days later, Mesa announced that the change of CEO allows the airline to terminate its agreement with Mokulele early, and would terminate the agreement effective March 24, 2009 and nullifying Mokulele agreement to operate Caravans as "go! express." [12]

In October 2009, Mokulele announced that it was going to join go! and become go! Mokulele.[13][14] Peter Forman, an airline historian, said that the merger will cause air fares in Hawaii to increase, since go! and Mokulele no longer compete with one another.[15] The merger agreement includes a joint venture, with 75% of the joint venture owned by Mesa and 25% owned by Mokulele shareholders.[16]

As of November 2011, Mokulele Airlines has 4 aircraft in its fleet consisting of:[17]

The Embraer 170 aircraft operated by Shuttle America have since been returned to the mainland after the acquisition by Mesa Airlines, parent company of go!, which is operating smaller Bombardier CRJ-200s.

Mokulele Airlines operates flights to the following destinations under the name Mokulele Express as part of the go! Mokulele joint-venture: