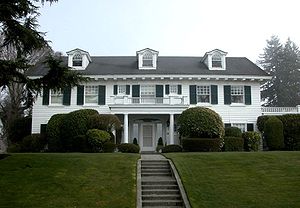 The Colonial Revival (also Georgian Revival or Neo-Georgian) was a nationalistic architectural style, garden design, and interior design movement in the United States which sought to revive elements of Georgian architecture, part of a broader Colonial Revival Movement in the arts. In the early 1890s Americans began to value their own heritage and architecture. This also came after the Centennial Exhibition of 1876 reawakened Americans to their colonial past, and was accelerated by the advent of the automobile, which allowed ordinary Americans to visit sites connected with the past.

Successive waves of revivals of British colonial architecture have swept the United States since 1876. The books and atmospheric photographs of Wallace Nutting helped spur the style. In the 19th century, the Colonial Revival took a more eclectic style, and columns were often seen.

Three localities that feature larger neighborhood tracts of colonial revival style residences are the Windsor Farms area in the west end of Richmond, Virginia; the Country Club District of Edina, Minnesota, a suburb of Minneapolis; and the Country Club District in Kansas City, Missouri, a residential district lying south and built around the former grounds of the Kansas City Country Club (now Loose Park), and which the J. C. Nichols Company began developing in 1906 to become what is now the largest master-planned community in the United States. All were built in the 1920s.

With the popularity of research-based history attractions like Colonial Williamsburg in the 1930s, the subsequent "colonial" architecture took a more scholarly and less ostentatious turn, and columns fell out of favor. By the 1976 United States Bicentennial, Colonial architecture merged with the then popular ranch-style house design, and created yet another iteration of the Colonial Revival, one that often featured eagle, cannon or drum motifs and sometimes wooden shake roofs. In the early part of the 21st century, styles evolved again, with "colonial" in the United States suggesting a more Anglo-Caribbean or British Empire feel.

Colonial Revival sought to follow the American colonial architecture of the period around the Revolutionary War, usually being two stories in height with the ridge pole running parallel to the street, a symmetrical front facade with an accented doorway and evenly spaced windows on either side of it.

Features that make them distinguishable from colonial period houses of the similar style of the early 19th century are elaborate front doors, often with decorative crown pediments and overhead fanlights and sidelights, but with machine-made woodwork that had less depth and relief than earlier handmade versions. Window openings, while symmetrically located on either side of the front entrance, were usually hung in adjacent pairs or in triple combinations rather than as single windows. Side porches or sunrooms were common additions to these homes, introducing modern comforts. Also distinctive in this style are multiple columned porches and doors with fanlights and sidelights. To go along with the Colonial Revival style of architecture, owners often sought to furnish the house with furnishings that are preferably antique but often are reproductions.