Portal of the Folded Wings Shrine to Aviation

Portal of the Folded Wings Shrine to Aviation 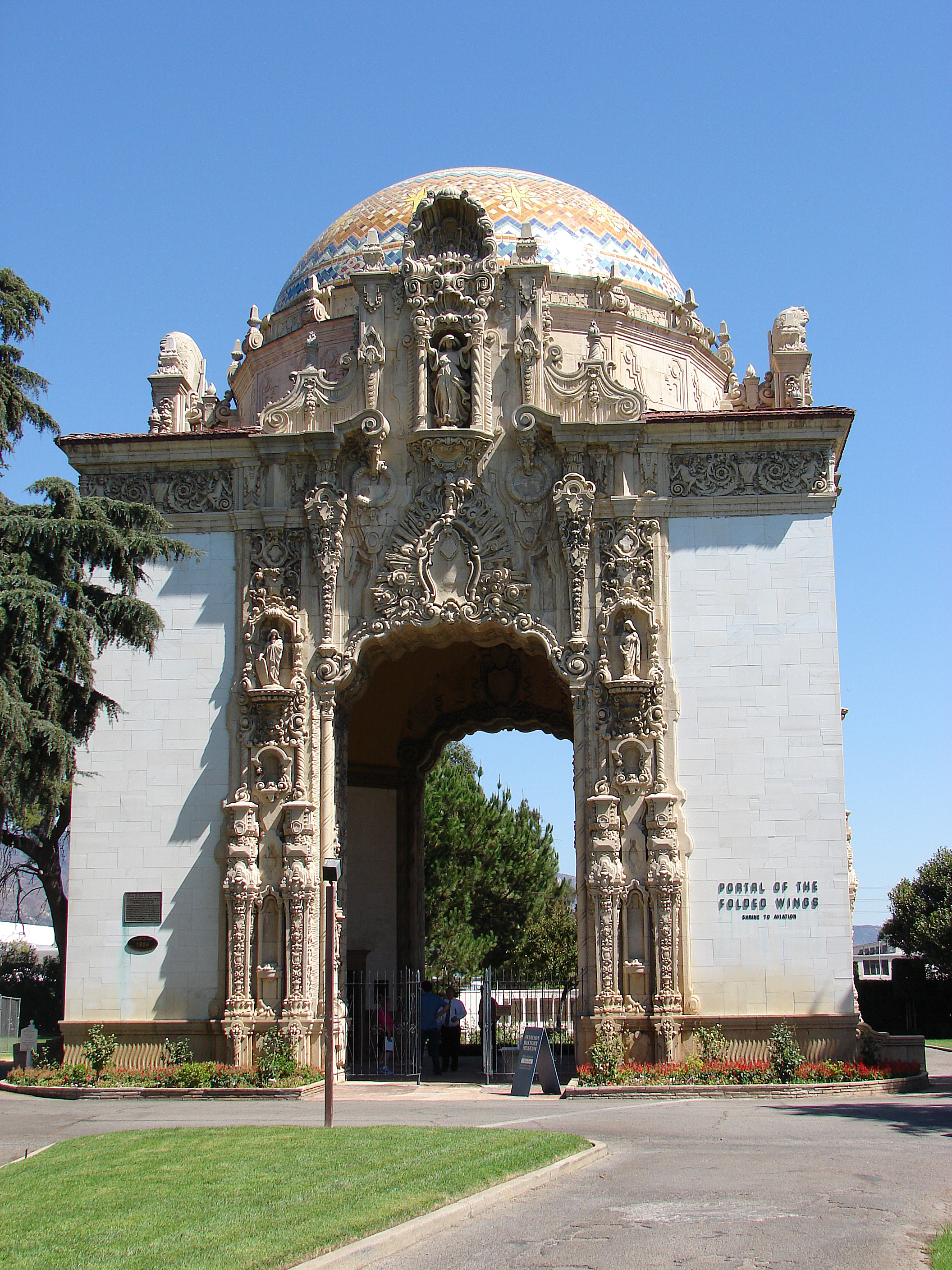 caption = Portal of the Folded Wings Shrine to Aviation is in Burbank, California
location = 10621 Victory Blvd

nearest_city =
lat_degrees =
lat_minutes =
lat_seconds =
lat_direction =
long_degrees =
long_minutes =
long_seconds =
long_direction =
area =
built =
architect = Kenneth McDonald, Jr.
architecture = Spanish/Mission Revival
added = ,
visitation_num =
visitation_year =
refnum = 98000246
mpsub =
governing_body = The Portal of the Folded Wings Shrine to Aviation is in . The shrine is a 75-foot tall structure of marble, mosaic and sculpted figures, and is the burial site for 13 pioneers of aviation. It was built in 1924 as the entrance to Pierce Brothers . It was dedicated in 1953 by aviation enthusiasts who wanted a final resting place for pilots, mechanics and other pioneers of flight. [cite news |first= |last= |authorlink= |coauthors= |title=Planes Fly Over Resting Place. Air Pioneers Paid Frequent Homage. |url= |quote=It is fitting that the sounds of planes frequently echo through a giant rotunda here. |publisher= |date=, |accessdate=2007-09-25 ]

Dedicated to the honored dead of American aviation on the 50th anniversary of powered flight, , , by Lieutenant General Ira C. Eaker (retired). Beneath the memorial tablets in this sacred portal rest the cremated remains of famous flyers who contributed so much to the history and development of aviation. The bronze plaques upon the marble walls memorialize beloved Americans who devoted their lives to the advancement of the air age. Administered underThe auspices of the Brookins-Lahm-Wright Aeronautical Foundation, this shrine stands as a lasting tribute. Trustees, Valhalla Memorial Park.

On , , it was rededicated by Dr. Tom Crouch, Chairman of the Aeronautics Department at the of the . [cite web |url=http://www.portalofthefoldedwings.com/portalhist.html |title=Portal of the Folded Wings Shrine to Aviation |accessdate=2007-09-25 |quote=In 1924, architect Kenneth MacDonald, Jr., and sculptor Federico Giorgi built the Valhalla Memorial Rotunda, a structure now known as The Portal of the Folded Wings - Shrine to Aviation, on the eastern edge of this property. Originally intended to be the entrance to Valhalla Memorial Park, visitors drove through the arches via Valhalla Drive, off Hollywood Way. The Rotunda, with its graceful garden walls and three reflection pools, became a tourist attraction and was used for musical concerts, radio broadcasts and other public events during the 1920's and 1930's. |publisher= ] [cite news |first= |last= |authorlink= |coauthors= |title=Resting Place for Early Aviators Gets a New Look. |url= |quote= They were among America's aviation pioneers - men and women who flew around the world in rickety contraptions at the turn of the century, undaunted by fear and seduced by the skies. In life, they were united by their love of adventure. Today, many of them are still together - interred in an obscure monument in a North Hollywood cemetery, directly under the takeoff path for Burbank Airport. Located in a corner of the Pierce Brothers Valhalla Memorial Park and Mortuary, the |publisher= |date=, |accessdate=2007-09-25 ]

* (1895-1954), co-pilot with Admiral Richard Byrd in 1927
* (1889-1953), flew for the Wright brothers
* (1897-1963), stunt pilot and aircraft designer
*John F. B. Carruthers (, &ndash; , ) Chaplain of the Portal of the Folded Wings, and air historian. "At the grave, when my warfare is ended. Though no flowers emblazon the sod. May a prayer mark the good I intended. Leaving all decoration to God."
* (1891-1966), Colonel and early pilot who built airplanes for Lincoln Beachy
* (1882-1957), aka Bert Kinner, built 'Kinner' airplanes. Amelia Earhart flew a Kinner.
* (1876-1960), balloon and dirigible pilot who flew in the Dominguez Air Meet in 1910
* (1868-1910), won the Statue of Liberty Race in 1910; first to carry a passenger across the English Channel.
* (1878-1964), the second licensed female pilot in the United States in 1911
* (1878-1958), one of Los Angeles's first women pilots
* (1884-1956), test pilot and instructor for Glenn Martin and manufacturer of parachutes. He built and flew his own plane in 1912 and invented the free-type manually operated parachute for the Army in 1918.
* (1890-1977), aerial acrobat and parachute jumper. She was married to James Floyd Smith.
* (1893-1967), WWI aviator, barnstormer, test pilot, and salesman. As Vice President of Lockheed Aircraft he sold Charles and Anne Lindbergh their Sirius airplane in 1931.
*Charles E. Taylor (1868-1956), machinist for the Wright brothers who helped design and build the first engine for the Wright Flyer flown at Kitty Hawk [cite news |first= |last= |authorlink= |coauthors= |title=Finding Charlie's grave: now located at The Portal of the Folded Wings Shrine to Aviation and Museum. |url=http://findarticles.com/p/articles/mi_hb5122/is_200610/ai_n18554439 |quote=It is unique to the United States, if not the world, that 14 of America's most famous aviation pioneers, including the Wright Brothers' mechanic, Charles Taylor, are buried just steps away from Burbank's busy airport and the former site of Lockheed's Skunk Works. Appropriately these graves are covered by dignified bronze tablets with shiny symbols of propellers and wings. These Early Birds rest beneath the dome of an ornate structure, so singular in its own right that it is listed on the National Register of Historic Places. It is now called The Portal of the Folded Wings Shrine to ... |publisher=Aircraft Maintenance Technology |date= |accessdate=2007-09-25 ] [cite news |first= |last= |authorlink= |coauthors= |title=C. E. Taylor Laid to Rest With Aviation Pioneers |url= |quote=The body of , the man who built the engine for the world's first airplane, was interred yesterday in the Portal of the Folded Wings at Valhalla Memorial Park, a mausoleum dedicated to aviation pioneer ... |publisher= |date=, |accessdate=2007-09-25 ]