Club 33 is a private club located in the heart of the New Orleans Square section of Disneyland. Officially maintained as a secret feature of the theme park, the entrance of the club is located next to the Blue Bayou Restaurant at "33 Royal Street" with the entrance recognizable by an ornate address plate with the number 33 engraved on it.[1]

Club 33 members and their guests have exclusive access to the club, which is not open to the public. In addition to beer and wine Club 33 has a full bar. Although patrons must order directly from their server rather than the service bar. Club 33 is the only location within Disneyland to offer alcoholic beverages, while the park has a park-wide liquor license and has set up bars for private events.

Members receive complimentary access to both Disney parks whenever they are open plus early park admission several days each week. In addition members are entitled to complimentary valet parking at the Grand Californian Hotel and access to the Lilly Belle, the presidential car on the Disneyland Railroad. Club 33 members receive up to six Immediate Fastpasses when they insert their Club 33 membership card into any of the Fastpass kiosks and bypass the stand-by queue. Members are permitted to join the skipper in the wheelhouse of the Mark Twain and the engineers in the engine compartment of the steam trains. 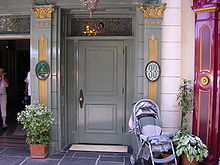 The door to Club 33 at Disneyland

While many stories circulate regarding the origin of the name of Club 33, two stories are the most widely circulated. The first and official explanation states Club 33 gets its name solely from its address of 33 Royal street in New Orleans Square at Disneyland.

A second and less well known story speculates the name honors there being 33 corporate sponsors at Disneyland in 1966-1967 when the club was being built and opened. Those sponsors are as follows[2]:

When Walt Disney was working with various corporate promoters for his attractions at the 1964–1965 New York World's Fair, he noted the various "VIP Lounges" provided as an accommodation for the corporate elite. This gave him the idea that culminated in Club 33. When New Orleans Square was planned, this special area for corporate sponsors and VIPs was included. Disney asked artist Dorothea Redmond to paint renderings and hired Hollywood set director Emil Kuri to decorate the facility.[3] While originally intended for exclusive use by Disneyland's Corporate sponsors and other industry VIPs, when Club 33 opened in May 1967—five months after Disney's death—individual memberships were also offered. As of 2011, there is a 14 year wait list for new memberships. The membership wait list has been closed for several years until the waiting time is significantly reduced. Corporate members pay an initiation fee of $27,500, and individual members pay $10,000 in addition to annual dues, which are about $6,100 or $3,500, respectively. Initiation and dues may change annually.

The foyer where members wait to be seated

To enter Club 33, a guest must press a buzzer on an intercom concealed by a hidden panel in the doorway. (At one time, a member needed only to insert his membership card in a slot near the buzzer and the door would open. However, this process no longer works.) A receptionist will ask for his name over the intercom and, if access is granted, open the door to a small, ornate lobby. Guests have the option of going to the dining level via an antique-style glass lift or a staircase to the second level which wraps around it.[1] The lift is an exact replica of one Disney saw and fell in love with during a vacation in Paris, but the owner of the original refused to sell. Undaunted, Disney sent a team of engineers to the Parisian hotel to take exact measurements for use in the creation of a replica. A sample of the original finish was taken ensure faithful reproduction.

The bar. The hallway at the right leads to the trophy room, stairs and elevator to the ground floor.

The second level has two dining rooms. One room (the Trophy Room) has dark wood paneling; the other room (the Main Dining Room) is more formal but has a lighter environment.[1][4][5]

Once at the dining level, guests can view antique furniture pieces collected by Lillian Disney.[1] The walls are adorned, in part, with butterflies pinned under glass and hand-painted animation cels from the original Fantasia film. Walt Disney also handpicked much of the Victorian bric-a-brac in New Orleans antique stores.[4][6]

The club is also furnished with props from Disney films. There is a fully functional glass telephone booth just off the elevator that was used in The Happiest Millionaire and an ornate walnut table with white marble top that was used in Mary Poppins. A video capture from the film on display atop the table shows actors Karen Dotrice, Matthew Garber and David Tomlinson standing immediately to its left. A newly-installed bar prepares drinks for members and their guests.[1][4][6]

A harpsichord which was rumored to have been an antique was in fact custom-built for Lillian Disney specifically for use in Club 33. The underside of the lid features a Renaissance-style painting that was actually done by Disney artists. Elton John and Paul McCartney have each played this harpsichord. It is now in disrepair and it cannot be played anymore.[1][4]

Walt Disney also wanted to make use of Audio-Animatronic technology within Club 33. Microphones in overhead lighting fixtures would pick up the sounds of normal conversation while an operator would respond via the characters. Though the system was never fully implemented, it was partially installed and remains so to this day. An Audio-Animatronic vulture is perched in one corner of the club's "Trophy Room."[1] The microphones are clearly visible at the bottom of each of the room's lighting fixtures. The animal trophies (Walt inherited them from a friend), for which the room was named, have been removed by Disney family members. Photos of the room with the trophies still installed can be seen on the walls now.[4][6]

In the dining room area one may walk through a door leading to the balcony. The balcony overlooks the water in the New Orleans area of the park. The shows often put on there are also very visible from the balcony.

Disneyland guests participating in the "Walk In Walt's Footsteps" tour are provided entrance to the lobby of Club 33. The tour guide will provide a brief history of the club and explain some of the artifacts in the lobby. The tour members may be photographed in the lift, but are not allowed access to the upstairs area.[7]

Note: these websites are not official representations of Disneyland or Club 33. Neither Disney nor Club 33 maintain an official public website for the Club.