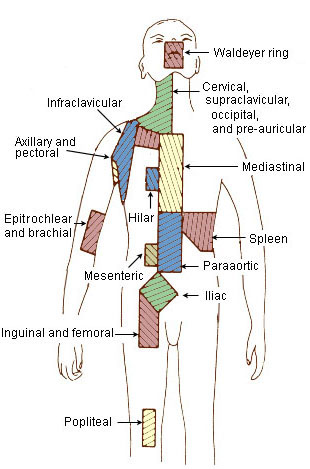 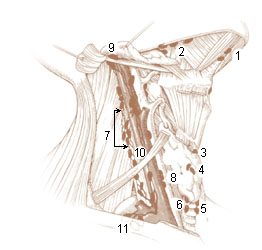 Malignancies of the internal organs can reach an advanced stage before giving symptoms. , for example, can remain less while metastatizing. One of the first visible spots where these tumors metastatise is the left supraclavicular lymph node. The left supraclavicular node is the classical Virchow's node because it is on the left side of the neck where the lymphatic drainage of most of the body (from the ) enters the venous circulation via the left .

of an enlarged Virchow's node includes , various intra-abdominal malignancies, , , and (e.g. of the arm).

It is named after (1821-1902), the German pathologist who first described the association. The presence of an enlarged Virchow's node is also referred to as , named after Charles Emile Troisier, who also described this.

Because an enlarged Virchow's node is often a harbinger of malignant disease, it is sometimes called the "sentinel node". This needs to be contrasted with the technique of biopsy. It should also not be confused with the 'sentinel gland' of the . [eMedicineDictionary|sentinel+gland]