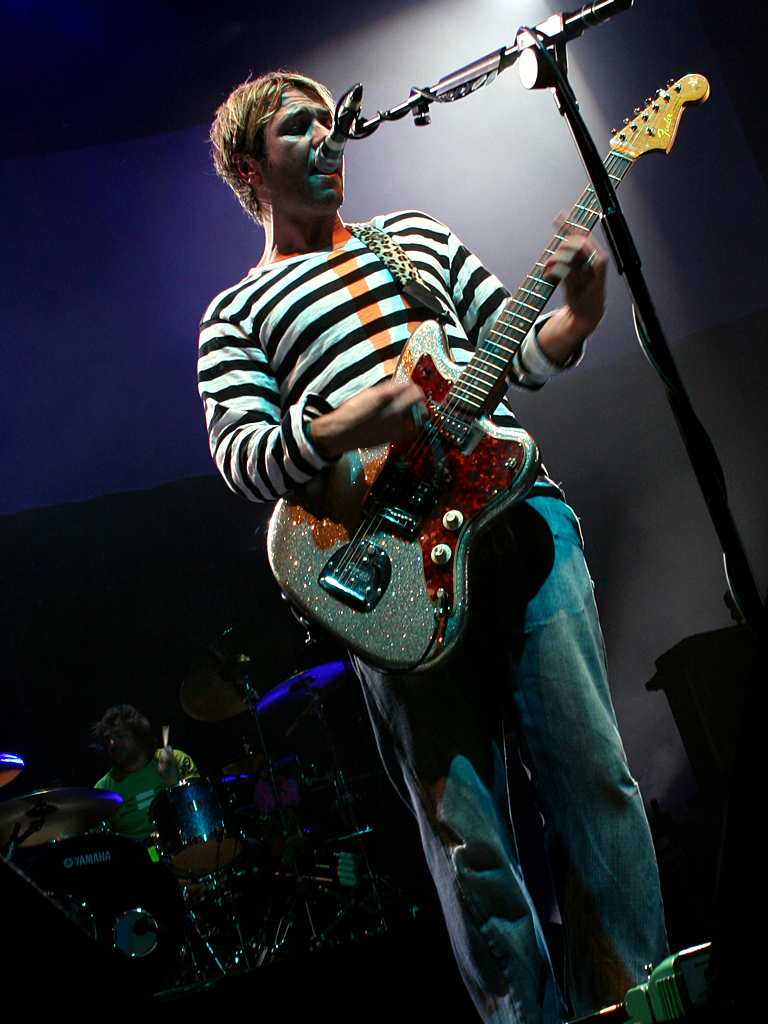 Grant Nicholas (Sometimes AKA Grantley) (born , , Monmouthshire) is the lead of the rock band Feeder, along with bassist and mers and later Mark Richardson.

Nicholas was born in but grew up in , . He was educated at . He performed in public for the first time at the age of 11 at school, and gained four O-levels (now referred to as GCSEs), including an A grade in Art.

In school, Nicholas played the , and was in his first band, Sweet Leaf (named after a by , who were Grant's favourite band in his school years, and the first he saw play live). He was promised his first by his parents, as an incentive to pass his exams. He received the guitar, an Aron Les Paul copy after passing them.

Nicholas' "signature guitar" is a 1967 Sunburst Jazzmaster. In addition to this, he also owns a 1964 Silver Jazzmaster (often tuned differently when used live) and another Sunburst 59 Jazzmaster. He is using Fender Telecasters more and more and has a 73 Sunburst Fender Telecaster a 63 Black Telecaster and a Blue Standard Telecaster. His other guitars include a Cherry Red Gibson SG, a Green Custom Jazzbird ,a Green Jazzmaster (which he destroyed at Feeder's headline set at Download 2005, and later said he regretted it, but still has the neck to make a new guitar with), a Gibson Explorer, a Sunburst Gibson J-200 Acoustic and a natural finish Yamaha acoustic (for recording). He uses a variety of different pedals and effects to produce the distinctive Feeder sound. His main s are: Vox AC30's, Fender Twins, Boogie and Marshall + Marshall and Orange Speaker Cabinets.

After leaving school Nicholas worked as a in South Wales, and also played in several bands, including Rain Dancer (whose sound resembled ), and Welsh nine-piece Temper Temper, where he met future Feeder drummer, Jon Lee. Lee joined Nicholas when he moved to to work as a .

It was while in London that Nicholas learnt how to be a and formed Hum (soon to be renamed Real, Reel, then Feeder) with Lee, and Hirose, who was working in London as a . A series of Reel recordings surfaced on in early 2006.

In 2001 Nicholas also had success with the re-recording of "You Don't See The Signs", a collaboration with producer/ duo Mark B and Blade, who had released the original version as their first single. The new version, subtitled the "Grant Nicholas Remix", reached #23 in the .

Nicholas has a long term partner, Kana. They had their first child, Hanna-Sky, in 2005 and their second child in 2007.

During Feeder's winter tour of 2005, a gig in was forced to be halted after only six songs when Grant suddenly lost his voice. He was later diagnosed with a severe throat infection with bleeds on his . The tour was recheduled and completed the following year in late March.

Nicholas spent the last few weeks of 2006 co-producing EnjoyDestroy's debut album with Brian Sperber. His joke nickname is "Spangle". This was given to him by , [http://feederfansite.moonfruit.com/grantnicholas/4512942947] and was used many times by the bands fans at concerts by the use of s and , but lost its appeal shortly afterwards.