Silappatikaram (Tamil: சிலப்பதிகாரம், Cilappatikāram, IPA: [siləppəd̪iɡɑːrəm] ?,[1] is one of the five Great Epics of ancient Tamil Literature. The poet prince Ilango Adigal, popularly believed to have been a Jaina monk, is credited with this work. He is reputed to be the brother of Senguttuvan from Chera. As a literary work, it is held in high regard by the Tamils. The nature of the book is narrative and has a moralistic undertone. It contains three chapters and a total of 5270 lines of poetry. The epic revolves around Kannagi, who having lost her husband to a miscarriage of justice at the court of the Pandya king, wreaks her revenge on his kingdom.

Silappatikaram has been dated to likely belong to the beginning of Christian era,[2] although the author might have built upon a pre-existing folklore to spin this tale. The story involves the three Tamil kingdoms of the ancient era, the Chola, the Pandya and the Chera. Silappatikaram has many references to historical events and personalities, although it has not been accepted as a reliable source of history by many historians because of the inclusion of many exaggerated events and achievements to the ancient Tamil kings.

Regarded as one of the great achievements of Tamil genius, the Silappatikaram is a poetic rendition with details of Tamil culture; its varied religions; its town plans and city types; the mingling of Greek, Arab, and Tamil peoples; and the arts of dance and music.[3]

Each of these chapters are made of several sub chapters called kaathais. Kaathais are narrative sections of the chapters. 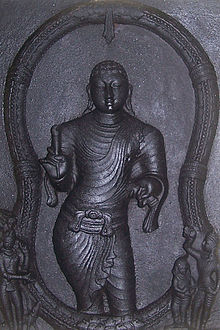 At the end of the Sangam epoch (second – third centuries CE), the Tamil country was in political confusion. The older order of the three Tamil dynasties was replaced by the invasion of the Kalabhras. These new kings and others encouraged the religions of Buddhism and Jainism. Ilango Adigal, the author of Silappatikaram, probably lived in this period and was one of the vast number of Jain and Buddhist authors in Tamil poetry. These authors, perhaps influenced by their monastic faiths, wrote books based on moralistic values to illustrate the futility of secular pleasures. These poets freely borrowed from Sanskrit literature, which had numerous books of didactic nature, as well as narrative plays by Bhāsa and Kalidasa. These authors went beyond the nature of Sangam poems, which contain descriptions of human emotions and feelings in an abstract fashion, and employed fictional characters in a well conceived narrative incorporating personal and social ramifications. Tamil epics were thus invented by these poets.

The author of Silappatikaram was Ilango Adigal (lit. Prince- Ascetic). He is reputed to be the brother of Chera king Senguttuvan, although there is no evidence in the Sangam poetries that the famous king had a brother.[4] There are also claims that Ilango Adigal was a contemporary of Sattanar, the author of Manimekalai.[5] The prologues of each of these books tell us that each were read out to the author of the other [Silappatikaram, pathigam 90]. From comparative studies between Silappatikaram and certain Sanskrit Buddhist and Jain works such as Nyayaprakasa, the date of Silappatikaram has been determined to be around the fifth and the sixth centuries CE.[6]

The story of Silappatikaram is set during the first few centuries of CE and narrates the events in the three Tamil kingdoms: Chera , Chola, and Pandya. It also mentions the Ilankai king Gajabahu and the Chera Senguttuvan.[7] It confirms that the northern kingdoms of Chedi, Uttarakosala, and Vajra were known to the Tamil people of the time. The epic also vividly describes the Tamil society of the period, its cities, the people's religious and folk traditions and their gods.

In the pathigam, the prologue to the book, Ilango Adigal gives the reader the gist of the book with the précis of the story. He also lays the objectives of the book: 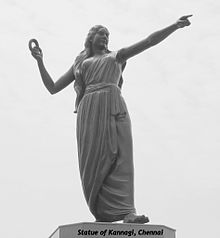 Manimekalai (Tamil: மணிமேகலை), written by the Tamil Jain poet Seethalai Saathanar is the continuation of Silappatikaram. This epic poem describes how Manimekalai, the beautiful daughter of Kovalan and Madhavi, followers of Buddhism, fights the allegation of queen.

Folk art and music in Silappatikaram

The Silappatikaram, apart from being the first known epic poem in Tamil, is also important for its literary innovations. It introduces the intermingling of poetry with prose, a form not seen in previous Tamil works. It features an unusual praise of the Sun, the Moon, the river Kaveri and the city of Poompuhar at its beginning, the contemporary tradition being to praise a deity. It is also considered to be a predecessor of the Nigandu lexicographic tradition.