Courbet was the lead ship of her class, the first dreadnoughts built for the French Navy. She was completed before World War I and named in honour of Admiral Amédée Courbet. She spent the war in the Mediterranean, helping to sink the Austro-Hungarian protected cruiser Zenta in August 1914. She spent the rest of the war providing cover for the Otranto Barrage that blockaded the Austro-Hungarian Navy in the Adriatic Sea. Although upgraded several times before World War II, she was not deemed to be a first-class battleship and spent most of the interwar period as a gunnery training ship.

Upon the German invasion of France, beginning on 10 May 1940, Courbet was hastily rearmed. She supported Allied troops in the defence of Cherbourg during June, later that month taking refuge in England. As part of Operation Catapult, she was seized in Portsmouth by British forces on 3 July and was turned over to the Free French a week later. She was used as a depot and an anti-aircraft ship there until 31 March 1941 when she was disarmed and hulked. Her engines and boilers were removed in 1944 to prepare her for use as a breakwater during the Normandy landings in June 1944. She was scrapped where she lay after the war. 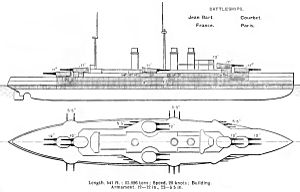 Courbet's waterline armoured belt extended well below the waterline as the French were concerned about protection from underwater hits. Her main armour was also thinner than that of her British or German counterparts, but covered more area. It was 270 mm (11 in) thick between the fore and aft turrets and tapered to 180 mm (7.1 in) towards the bow and stern. It extended 2.4 m (7 ft 10 in) below the normal waterline. Above the main belt was another belt, 180 mm thick, that covered the sides, and the secondary armament, up to the forecastle deck, 4.5 m (15 ft) deep, between the fore and aft turrets. The conning tower had armour 300 mm (11.8 in) thick. The main gun turrets had 290 mm (11.4 in) of armour on their faces, 250 mm (9.8 in) on their sides and roofs 100 mm (3.9 in) thick. Their barbettes had 280 mm (11.0 in) of armour. There was no anti-torpedo bulkhead although there was a longitudinal bulkhead abreast the machinery spaces that was used either as a coal bunker or left as a void.[4]

Courbet was built by the Arsenal de Lorient, at Lorient. Her keel was laid down on 1 September 1910 and she was launched on 23 September 1911. She was completed on 19 November 1913 and finished her trials before World War I began the following year.[1]

Courbet joined the 1st Division of the 1st Squadron of the French Mediterranean Fleet, at Toulon, upon commissioning in 1913. She became the flagship of Vice-Amiral Augustin Boué de Lapeyrère, commander of the 1st Squadron, after the beginning of the war until 12 April 1915.[5] Lapeyrère decided immediately on a sweep into the Adriatic to surprise the Austrian vessels enforcing a blockade of Montenegro and the Anglo-French force, which included her sister ship Jean Bart, succeeded in cutting off and sinking the Austro-Hungarian protected cruiser Zenta in an engagement off Antivari on 16 August 1914, although her accompanying destroyer managed to escape.[6] She spent most of the rest of 1914 providing gunfire support for the Montenegrin Army until U-12 hit Jean Bart on 21 December with a torpedo.[2] This forced the battleships to fall back to either Malta or Bizerte to cover the Otranto Barrage. After the French occupied the neutral Greek island of Corfu in 1916 she moved forward to Corfu and Argostoli, but her activities were very limited as much of her crew was used to man anti-submarine ships.[7] Before the end of the war she was fitted with seven 75-millimetre (3 in) Mle 1918 anti-aircraft (AA) guns in single mounts.[8] These guns were adaptations of the famous French Mle 97 75-mm field gun.[9]

Courbet served as Vice-Amiral Charlier's flagship between 6 June 1919 and 20 October 1920. The following year she became a gunnery training ship at Toulon, but she suffered a serious boiler fire in June 1923[3] that required repairs, so she was given the first of her upgrades between 9 July 1923 and 16 April 1924, at La Seyne-sur-Mer. This included replacing one set of boilers with oil-fired boilers, trunking together her two forward funnels, increasing the maximum elevation of the main armament from 12° to 23°, removal of her bow armour to make her more seaworthy, the installation of a fire-control director, with a 4.57 metres (15 ft 0 in) rangefinder, atop the new tripod foremast as well as the installation of an experimental 7.6 metres (24 ft 11 in) rangefinder on top of her conning tower.[10] She had another boiler fire in August 1924 and remained under repair for the rest of the year, but resumed her duties as a gunnery training ship upon her return from the dockyard.[7]

She was refitted again between 15 January 1927 and 12 January 1931. This was much more extensive than her earlier refit as another set of boilers was converted to oil-firing, her high and medium pressure direct-drive turbines were replaced by geared turbines and her fire-control systems were comprehensively upgraded. A large cruiser-type fire-control director was added atop the foremast with a 4.57-m coincidence rangefinder and a 3-metre (9 ft 10 in) stereo rangefinder. The rangefinder above the conning tower was replaced by a duplex unit carrying two 4.57-m rangefinders and another 4.57-m rangefinder was added in an armoured hood next to the main mast. Two directors for the secondary guns were added on the navigation bridge, each with a 2-metre (6 ft 7 in) coincidence rangefinder. A 8.2 metres (26 ft 11 in) rangefinder was added to the roof of 'B' turret, the second one from the bow. Her Mle 1918 AA guns were exchanged for Mle 1922 guns and they were provided with three 1.5-metre (4 ft 11 in) rangefinders, one on top of the duplex unit on the conning tower, one on 'B' turret and one in the aft superstructure.[11] The 75-mm guns had a maximum depression of 10° and a maximum elevation of 90°. They fired a 5.93-kilogram (13.1 lb) shell at a muzzle velocity of 850 m/s (2,800 ft/s) at a rate of fire of 8–18 rounds per minute and had a maximum effective ceiling of 8,000 metres (26,000 ft).[12]

She was transferred from the gunnery school to the navigation school in 1937, before her final refit between 1 April 1937 and 19 September 1938 that removed her torpedo tubes and overhauled her boilers.[11] By 1939 she reverted back to her role as a gunnery training ship, but she was ordered to Brest and Quiberon with her sister Paris upon the outbreak of World War II.[7]

Courbet and her sister Paris formed a Fifth Squadron at the beginning of the war. They were transferred to the Atlantic to continue their training duties without interference. Both ships were ordered restored to operational status on 21 May 1940 by Amiral Mord and they were given six Hotchkiss 13.2-millimetre (0.52 in) twin machine gun mounts and two single 13.2-mm Browning machine guns at Cherbourg. Courbet was ordered to provide gunfire support to the defenders of Cherbourg against the advancing 7th Panzer Division and covered the evacuation of the town by the Allies, although the lack of spotting aircraft meant that she was not particularly effective in that role.[13]

Courbet sailed for Portsmouth on 20 June. She was seized there, as part of Operation Catapult, by British forces on 3 July and a week later was turned over to the Free French, who used her as a depot and an anti-aircraft ship in Portsmouth until 31 March 1941 when she was disarmed. She remained in use as a depot and target ship until she was earmarked for use as a "Gooseberry" breakwater at Sword Beach during the Battle of Normandy.[7] She had to be towed from Weymouth on 7 June 1944 by the British Rescue tugs HMRT Growler and HMRT Samsonia as her engines and boilers had been removed earlier and replaced with concrete.[14] She was scuttled in place on 9 June and was hit by Neger manned torpedoes during the nights of 15–16 and 16–17 August. She was scrapped in place after the war.[7]