Clash cymbals or hand cymbals are cymbals played in identical pairs by holding one cymbal in each hand and striking the two together. 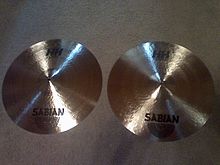 A pair of Sabian crash cymbals.

Designers of various sound banks, such as the Garritan Personal Orchestra, distinguish between handheld and suspended cymbals by referring to the former as "Piatti cymbals", having already reserved the term "clash cymbal" for the latter. Since "piatti" is the Italian term for "cymbal", this may be an awkward, redundant term.[citation needed] 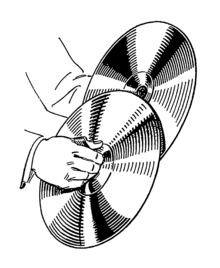 Clash cymbals are conventionally played by a standing player. In a marching band context, the player prepares for the crash by holding the cymbals parallel a few inches apart, with the surfaces vertical, one at waist height and the other some distance above it. They are struck together by bringing the upper cymbal down and the lower up to meet in approximately the middle.

If only a single crash is to be played, the sounding cymbals are then both raised in a follow through and held vertical but no longer parallel, but instead in roughly the same plane with their concave surfaces facing the audience and held head high on either side of the player. This allows the cymbals to resonate freely. Alternatively, if another stroke is to follow, the cymbals are allowed to follow through only until they have reached the same heights as they started (but now vertically reversed), and are then ready in position for the next stroke.

For softer strokes, in preparation the cymbals are held not quite vertically but at a slight angle, but still parallel, and the upper cymbal is then allowed to fall towards the lower. The follow through is reduced or even omitted after softer strokes.

Because clash cymbals can be maneuvered like pom-poms or other handheld devices, cymbalists will often employ various feats of showmanship, such as spinning and flashing, striking cymbals between players, or creating visual designs. Some of these serve a functional purpose—waving cymbals after a grand stroke allows for the clash to resonate more clearly. Others are purely decorative—a cymbal line moving in quick pace during a field show can simulate airplanes or dragons.

Also, there are numerous techniques for playing cymbals, many of them very different from those listed above.

In an orchestral or wind band context, the cymbals are held parallel a few inches apart at chest height. For piano crashes, the cymbals are held vertically, whereas for forte crashes, they are held almost horizontal, with the left cymbal on bottom. The left hand holds one cymbal stationary, while the right hand brings the other cymbal together, with the top (at soft dynamics) or left (at loud dynamics) edge hitting first, followed almost immediately by the other.

Other common techniques are to choke the sounding cymbals by bringing them together and then damping one or both against the body. A skilled player can produce elaborate rhythms by choking the cymbals well, and with fine cymbals can exercise precise control over both the loudness and the decay and apparent duration of each crash.

Less skilled players, children and cartoon characters are often seen playing cymbals by beating them together with a purely horizontal motion. This technique has even been used by some avant-garde composers, but generally produces poor control of the sound and risks damage to fine cymbals, which are not designed for such usage. 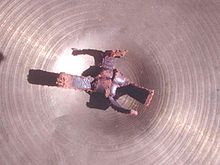 In the orchestra, clash cymbals are normally matched pairs of clash cymbals. They are commonly found in three weights:

Pairs in all weights range in size from 14" to 22" diameter. The smallest and thickest tend to have the higher pitch, the thinner ones allow for greater expression, and the largest the greatest volume.

Clash cymbals are also used in military, stage and marching bands, percussion ensembles, theatrical performances, and in state and religious ceremonies. These range in size from those of orchestral cymbals all the way down to about 5" in diameter.

Orchestral clash cymbals and most band cymbals have leather straps passed through the holes in their bells, leading to four tails which are knotted inside the bell, to allow the player to hold them. Marching bands in addition use leather pads between the outsides of the bells and the player's hands. 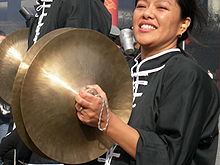 Toy clash cymbals and some others have wooden or plastic handles instead. China type clash cymbals need no handles as the squared bells can be held quite securely without them, and are often joined by a cord through the holes in their bells which allows the player to release the bells after striking producing less damping and greater sustain, and to swing the cymbals producing doppler effects.