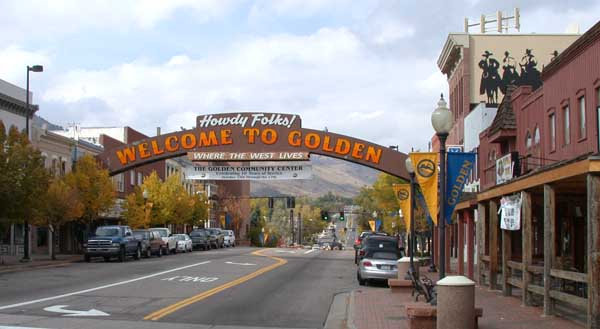 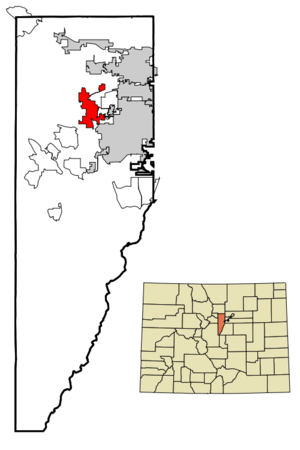 mapsize = 250x200px
map_caption = Location in Jefferson County and the

The historic City of Golden is a Home Rule Municipality that is the of Jefferson County, , .GR|6 Golden lies along Clear Creek at the eastern edge of the s of the of the . Founded during the on , the mining camp was originally named Golden City in honor of . Golden City served as the capital of the provisional from 1860 to 1861, and capital of the official from 1862 to 1867. In 1867, the territorial capital was moved about convert|15|mi|km|0 east to Denver City. The estimates that the city population was 17,366 in 2005.

The , offering programs in and is located in Golden. Also there are the , the , The , and the . It is the birthplace of the , a candy bought out by the . Famous western showman William F. "Buffalo Bill" Cody is buried nearby on Lookout Mountain.

Golden has a rich and colorful history. Established as a gold rush town, Golden quickly became a leading economic and political center of the region, being a center of trade between the gold fields and the east, a crossroads and gateway of important roads leading to the mountains, and a center of area industry. By the close of 1860 Golden City had been popularly elected the seat of Jefferson County and was capital of the provisional Jefferson Territory. While the town lost much of its populace and leading citizenry during the , the town persevered and became capital of the federally recognized in 1862, continuing until 1867. Afterward, Golden matured and blossomed into the "Lowell of the West", a regional center of trade and industry that boasted at certain points in time three flour mills, five smelters, the first railroad into the Colorado mountains, the Coors Brewery, brick works, the only paper mill west of , clay and coal mines, and more. During the 1870s it became home to three institutions of higher education, the of which the remains today. Golden was also home to an opera house and seven churches including Colorado's third () church, oldest church, and first Swedish immigrant () church. The town was home to sizeable populations of German, Swedish, Italian and Chinese ; five immigrants became mayors of Golden.

Through the latter 19th to early 20th centuries Golden maintained a small town population of around 2,500 people. Several industries faded or were destroyed by tragic events, but others flourished to continue Golden's industrial legacy including its brewing, brickmaking, clay mining and porcelain industries. Golden became even more connected through , with two trolley lines extending to , while the movie theater gradually took the place of the opera house for downtown entertainment. Downtown revitalization efforts began in the 1920s with its first streetscape and ornamental lighting project and on its north and east, anchored by new senior high and grade schools. The historic cultural tension between the city's north and south sides gradually eased, and the town successfully endured additional major economic depressions including the Silver Crash of 1893 and the . The School of Mines gained a worldwide academic reputation, Coors rapidly came to the forefront of the national and international brewing and porcelain industries, and the city modernized with a recreation center, paved streets and more.

After Golden boomed, rapidly gaining population, size and economy. In 1959 the town nearly tripled in geographic size overnight when it annexed large properties to the south including the new Magic Mountain theme park, one of the earliest entertainment attractions of its kind. A number of new subdivisions were built and public infrastructure was modernized including a new senior high school, city hall and central fire and police stations, new downtown anchors including and , several new church buildings, new county offices, and the Horizon Plan which transformed the School of Mines. The Oil Crash and near simultaneous failure of several downtown anchors placed its central business district into recession by the 1980s, and the downtown was revitalized again through various initiatives including its second streetscaping project in 1992. In 1993 the old Golden High School building was converted into the American Mountaineering Center making Golden a premier research and education hub for mountaineering. The Coors Brewery had become the largest single site brewery in the world,its porcelain plant among the foremost of its kind in the world, and Golden became home to the . Today Golden has a population of around 18,000 people and is home to more people and businesses of national and international influence than ever before, yet maintains a small town historic identity all its own.

Golden is mostly situated just north of Interstate 70; U.S. Highway 6 and Highway 93 connect to most of town. State Highway 470 starts in Golden. It's location near I70 and near the mountains makes it an ideal location for outdoor enthusiasts who also need to earn a living in the Metro Denver area.

Golden is now regarded as a western suburb of Denver and part of the . Golden and Jefferson County are home to some of the world's best mountain biking. Chimney Gulch/Windy Saddle to Apex Park is a common bike route, with several hairpin turns up the side of Mount Zion and Lookout Mountain. Many of the best trails in Jefferson County are either in or very near Golden. [http://www.co.jefferson.co.us/openspace/openspace_T56_R108.htm]

Natural outdoor rock climbing is also a local pastime at the locally known North Table Mountain, with many bolted and trad routes from 5.5 to 5.13d.

Recently, as part of the Fossil Trace Golf Course in Golden, they have opened a free self-guided walking tour through some of the better preserved fossils: [http://www.dinoridge.org/]

Golden is scheduled to be the endpoint of the West Corridor in Denver's FasTracks network by 2013.

There were 6,877 households out of which 26.4% had children under the age of 18 living with them, 44.7% were married couples living together, 8.8% had a female householder with no husband present, and 43.1% were non-families. 29.5% of all households were made up of individuals and 5.9% had someone living alone who was 65 years of age or older. The average household size was 2.31 and the average family size was 2.85.

Golden is a home rule municipality of the city form of statutory government in Colorado. Its government is a city council/city manager form of leadership which consists of a popularly elected Mayor elected by the entire citizenry, two Councilors each representing a District comprising one half of the city, and four Councilors each repesenting a Ward which each District is divided into two of. These seven members of the City Council are each popularly elected from their Ward/District/At Large and they serve as the governing body of the city. The Council hires and supervises the City Manager, who hires and supervises the City Staff, which handles the daily operations of the city.

Golden was among the first municipally governed cities in Colorado and has one of the oldest continuously functioning governments in the state. To date Golden has held 89 popular elections for municipal officials since its first such election in 1860, including 83 regular elections and 6 special elections in 1860, 1879, 1882, 2005, 2006 and 2008.

The main part of Golden is laid out upon a historic street grid system running on an approximately northwest-southeast axis, aligned with Clear Creek upon which the heart of the city was established. Most of these are paved streets with a total 66-foot right of way, including area for sidewalks which in older areas are often separated by a landscaped strip from the street featuring beautiful and historic trees. The only historic street in the grid not named "street" is the main thoroughfare, Washington Avenue, an 80-foot right of way featuring a downtown care streetscape with trees, planters, brick, flagstone and ornamental street lights. Golden's streets are generally numbered on the east-west streets, and named on the north-south streets, and are named after pioneers, American Indian tribes and trees. The streets of the southeasterly part of town are aligned with the Denver metropolitan street grid, which are aligned directly with the true directions of the compass, and they share the names of the Denver grid. Outlying subdivisions of Golden consist of their own, often curvilinear street systems, of various degrees of connection with the rest of the city. Golden has several main thoroughfare street connections to the east which date to the Gold Rush times, including West 44th Avenue, West 32nd Avenue and South Golden Road.

The city of Golden is part of the network of the which provides bus and light rail service throughout the Denver metropolitan area. Its bus routes 16, 16L, 17, 44L and GS connect the city with other points of the Denver metropolitan area and Boulder. Currently under construction is the West Corridor of the line, which will parallel 6th Avenue into Golden to its terminal at the Jefferson County Government Center. It is a modern rendition of the historic trolley line which Golden interests spearheaded in the 1890s. Although no longer carrying passengers, Golden continues to be served by transportation for cargo, and has been continuously since 1870. These lines are owned by the railroad and serve business interests in the northeastern end of the city. Within the Coors Brewery grounds it becomes the brewery's own in-house railroad. The recreational miniature gauge Rio Golden Railroad serves passengers at .

The closest airport to Golden is nearby , a air transport facility located in northeastern Jefferson County. Passenger traffic generally uses in northeastern Denver. However, residents of Golden might also choose to go to in Colorado Springs.

Golden, originally home to the second school in Colorado, is today part of the Jefferson County R-1 School District which provides public education throughout Jefferson County, Colorado. The city has three elementary schools, Mitchell, Shelton and Ralston Elementary in the foothills to the west; one middle school, Bell MIddle School; and Colorado's oldest senior high school, . In higher education Golden features the oldest public owned institution of higher education in the state, the , which campus lies near the heart of the city overlooking its core area.

There is an unusual variety of cultural interests for Golden residents and visitors to choose from. Golden is home to the , which performs seasonally at Bunker Auditorium in the Green Center at the , and has performed continuously since 1953. The city is also home to the , a nationally renowned art exhibition venue housed in a historic church. Two live theater groups are housed in Golden, including one of only two Denver metro area groups, the Music Hall, which has performed since 1986; and the dramatic live theater venue of the Miners Alley Playhouse in downtown Golden, which has performed there since 2001. Golden is home to possibly the most museums per capita of any place in Colorado, including the Rocky Mountain Quilt Museum, , Colorado School of Mines Geology Museum, , Golden Pioneer Museum, Museum, and the Clear Creek History Park.

Golden has several annual events which draw people from around the city and Colorado. These include Heart & Soul Month in February, two fireworks shows sponsored by Heritage Square (since 1971) and the Golden Lions Club (since 1972), the largest event of the year in Buffalo Bill Days in late July (since 1946); the Golden Fine Arts Festival in August (since 1990), Goldenfest in September (since 1978, originally Oktoberfest), and Olde Golden Christmas (since 1972) in November to December.

Golden's competitive athletics go back for well over a century and feature public school and collegiate teams and athletes. competes in various sports in 4A competition in Colorado, and its football program dates as far back as the 1890s. The competes primarily in NCAA Division II athletics in a variety of sports including football (dating to 1888), baseball and basketball. Clear Creek is also home to a nationally renowned course, and the city is home to the American Mountaineering Center and features noteworthy rock climbing, mountain biking, hiking, and hang gliding opportunities in close proximity. Golden has to date generated three Major League Baseball players, four Olympic competitors and two Olympic medalists.

Golden has had a long, rich history spanning nearly one and a half centuries, which includes many who were important in Colorado and American History.