Crystal River is a city in Citrus County, Florida, United States. The population was 3,485 at the 2000 census. (4,044 in 1990). According to the U.S Census estimates of 2005, the city had a population of 3,539. [1] The city was incorporated in 1903 and is the self professed "Home of the Manatee".[2]. Crystal River Preserve State Park is located nearby, and Crystal River Archaeological State Park is located in the city's northwest side. Crystal River is at the heart of the Nature Coast of Florida. The City is situated around the magnificent Kings Bay, which is spring-fed so keeps a constant temperature year round, it is the second largest natural aquifer in Florida, after the Everglades. Kings Bay is home to over 400 manatees during the winter when the water temperature in the Gulf of Mexico cools and is the only place in the United States where people can legally interact with them in their natural conditions. Tourism based on watching and swimming with manatee is the fastest growing contribution to the local economy. In 2005 there was a movement to dissolve the city however this did not succeed and the City has since grown by annexure. As of 2007 the city police department was replaced by the Citrus County Sheriff's Office.[citation needed] Crystal River is home to a mixed coal and nuclear power plant, the Crystal River 3 Nuclear Power Plant which is a major contributor to local real estate taxes. 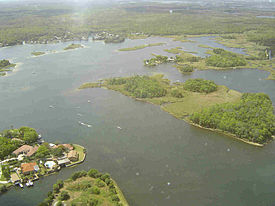 Kings Bay is fed by a springs system, it is connected to the Gulf of Mexico by the Crystal River.

There were 1,498 households out of which 21.8% had children under the age of 18 living with them, 48.0% were married couples living together, 10.5% had a female householder with no husband present, and 38.1% were non-families. 32.0% of all households were made up of individuals and 13.0% had someone living alone who was 65 years of age or older. The average household size was 2.16 and the average family size was 2.68.