Gideon or Gedeon (Hebrew: גִּדְעוֹן, Modern Gid'on Tiberian Giḏʻôn), which means "Destroyer," "Mighty warrior," or "Feller (of trees)" was judge of the Hebrews. His story is recorded in chapters 6 to 8 of the Book of Judges in the Hebrew Bible. Judges 6–8. He is also named in chapter 11 of the Epistle to the Hebrews as an example of a man of faith.

Gideon is the son of Joash, from the Abiezrite clan in the tribe of Manasseh.

"Gideon thanks God for the miracle of the dew", painting by Maarten van Heemskerck (Musée des Beaux-Arts de Strasbourg)

As is the pattern throughout the book of Judges, the Israelites again turned away from God after 40 years of peace brought by Deborah's victory over Canaan and were allowed to be oppressed by the neighboring Midianites and Amalekites. God chose Gideon, a young man from the tribe of Manasseh, to free the people of Israel and to condemn their worship of idols.

Very unsure of both himself and God's command, he requested proof of God's will by three miracles: firstly a sign from an angel in Judges 6:16ff, and then two signs involving a fleece, performed on consecutive nights and the exact opposite of each other:

36Then Gideon said to God, "You say that you have decided to use me to rescue Israel. 37Well, I am putting some wool on the ground where we thresh the wheat. If in the morning there is dew only on the wool but not on the ground, then I will know that you are going to use me to rescue Israel." 38That is exactly what happened. When Gideon got up early the next morning, he squeezed the wool and wrung enough dew out of it to fill a bowl with water. 39Then Gideon said to God, "Don't be angry with me; let me speak just once more. Please let me make one more test with the wool. This time let the wool be dry, and the ground be wet." 40 That night God did that very thing. The next morning the wool was dry, but the ground was wet with dew. (Judges 6:36–40, Good News Bible)

On God's instruction, Gideon destroyed the town's altar to the foreign god Baal and the symbol of the goddess Asherah beside it. He went on to send out messengers to gather together men from the tribes of Asher, Zebulun, and Naphtali, as well as his own tribe Manasseh in order to meet an armed force of the people of Midian and the Amalek that had crossed the Jordan River and were encamped in the Valley of Jezreel.

However, God informed Gideon that the men he had gathered were too many – with so many men, there would be reason for the Israelites to claim the victory as their own instead of acknowledging that God had saved them. God first instructed Gideon to send home those men who were afraid. Gideon then allowed any man who wanted to leave, to leave; 22,000 men returned home and 10,000 remained. Yet the number was still too many, according to God:

4But the Lord said to Gideon, "There are still too many men. Take them down to the water, and I will sift them for you there. If I say, 'This one shall go with you, he shall go; but if I say, this one shall not go with you, he shall not go." 5 So Gideon took the men down to the water. There the Lord told him, "Separate those who lap the water with their tongues like a dog from those who kneel down to drink." 6Three hundred men lapped with their hands to their mouths. All the rest got down on their knees to drink. 7 The Lord said to Gideon, "With the 300 men that lapped I will save you and give the Midianites into your hands. Let all the other men go, each to his own place.(Judges 7:4–7, NIV Bible)

During the night God instructed Gideon to approach the Midianite camp. Gideon overheard a Midianite man tell a friend of a dream in which God had given the Midianites over to Gideon. Gideon worshiped God for His encouragement and revelation. Gideon returned to the Israelite camp and gave each of his men a trumpet (shofar)[1] and a clay jar with a torch hidden inside. Divided into three companies, Gideon and the three hundred marched on the enemy camp.

17"Watch me," he told them. "Follow my lead. When I get to the edge of the camp, do exactly as I do. 18When I and all who are with me blow our trumpets, then from all around the camp blow yours and shout, 'For the Lord and for Gideon.' " .... 20The three companies blew the trumpets and smashed the jars. Grasping the torches in their left hands and holding in their right hands the trumpets they were to blow, they shouted, "A sword for the Lord and Gideon!" 21While each man held his position around the camp, all the Midianites ran, crying out as they fled. 22When the three hundred trumpets sounded, the Lord caused the men throughout the camp to turn on each other with their swords. (Judges 7:17–22, NIV Bible) 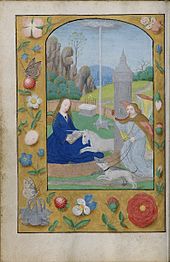 Gideon's fleece, as symbol of Mary, in a "Hunt of the Unicorn Annunciation" (ca. 1500) from a Netherlandish book of hours. For the complicated iconography, see Hortus Conclusus.

Gideon sent messengers ahead into Israel calling for the Ephriamites to pursue the retreating Midianites and two of their leaders, Oreb and Zeeb. Gideon and the three hundred pursued Zebah and Zalmunna, the two Midianite kings. When he had asked for assistance in his pursuit, the men of Succoth and Peniel refused and taunted Gideon. After capturing the two kings, Gideon punished the men of Succoth, and pulled down the tower of Peniel killing all the men there. Finally, Gideon himself killed Zebah and Zalmunna as justice for the death of his brothers.

The Israelites pleaded with Gideon to be their king, but he refused, telling them that only God was their ruler. Interestingly, however, he carries on to make an "ephod" out of the gold won in battle, which causes the whole of Israel again to turn away from God. Gideon had 70 sons from the many women he takes as wives. He also had a concubine who bore him a son that he named Abimelech (which means "my father is king"). There was peace in Israel for forty years during the life of Gideon. As soon as Gideon dies of old age, the Israelites turn to again worship the false god Baal-Berith and ignore the family of Gideon.

In both Eastern Orthodoxy and Western Christianity, Gideon's fleece was regarded as a type of the Annunciation to Mary, where Mary was the fleece, and Christ the dew.[citation needed] He is regarded as a saint by the Eastern Orthodox/Eastern Catholic Churches as well as the Roman Catholic Church, who hold his feast day on September 26 (those churches which follow the traditional Julian Calendar, September 26 currently falls on October 9 of the modern Gregorian Calendar). He is listed in the 2004 edition of the "Roman Martyrology" as (2) on September 26. He is also commemorated, together with the other righteous figures of the Old Testament on the Sunday of the Holy Fathers (the Sunday before Christmas). He is commemorated as one of the Holy Forefathers in the Calendar of Saints of the Armenian Apostolic Church on July 30.