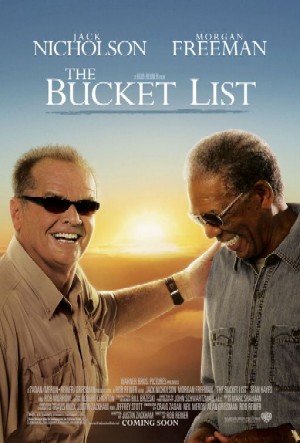 "The Bucket List" is a 2007 comedy-drama film written by, directed by and starring , , Sean Hayes, , and . The story follows two terminally ill men (Nicholson and Freeman) on a road trip with a wish list of things to do before they "."

mechanic Carter Chambers (Freeman) and billionaire hospital magnate Edward Cole (Nicholson) meet for the first time in the hospital after both have been diagnosed with . They become friends as they undergo their respective treatments. Carter is a gifted amateur historian and family man who had wanted to become a history professor, but in his youth had been "broke, black, and with a baby on the way" and thus never rose above his job at the McCreath body shop. Cole is a corporate tycoon, eccentric loner, four times divorced, who enjoys nothing more than tormenting his personal valet/servant, Matthew, whom he calls Thomas (Hayes). He quickly befriends Carter, making Matthew serve Carter as well as him and ordering his doctor (Morrow) to familiarise himself with Carter's health.

Both are diagnosed with a year or less to live. Carter begins writing a "bucket list," or things to do before "he kicks the bucket." After hearing he has less than a year to live, Carter wads it up and tosses it on the floor. Matthew comes in the next morning and picks it up with other things that are on the floor. Cole finds it among the items and reads it. Cole pushes Carter (by suggesting he add things like seeing the world, , "fun things," etc.), and promises to finance the trip. Despite the protests of his wife, Virginia (Todd), Carter eagerly agrees.

The pair then begin an around-the-world vacation, embarking on race car driving, sky diving, climbing , and going on in . Along the way they discuss faith and family, and learn from each other that Carter has long been feeling less in love with his wife and Cole is deeply hurt by his estrangement with his only daughter, who disowned him after he sent some people to "take care" of her abusive husband.

In , Cole hires a prostitute () for Carter , who has never had sex with any other woman than his wife, but Carter declines, finding that the love he had for his wife is still strong. He asks to return home, and in gratitude for helping him, he tries to reunite Cole with his daughter. Cole lacks the courage to face her, however. He angrily storms off and Carter returns home to his wife, children, and grandchildren.

The family reunion is short lived. In the preparation for a romantic interlude with his wife, Carter suffers a seizure and is rushed to the hospital. The cancer has spread to his . Cole, who is now in complete remission, visits him there, and they share a few moments together where Carter reveals the origin of the "world's most rare coffee" (), along with the factors that contribute to its unique aroma and taste. They share a good laugh and Carter crosses off "laugh till I cry" and insists Cole finish the list without him. Carter then goes into surgery, but the procedure is unsuccessful and he dies on the table.

Cole delivers a eulogy at his funeral, explaining that he and Carter had been complete strangers mere months before his death, but that the last three month's of Carter's life were the best three months of his (Cole's life). He then crosses "help a complete stranger for a common good" off the list. This list item was one that Carter added. Cole says Carter had helped him (Cole), a complete stranger, with Carter knowing it before he (Cole) did. We see Edward finally attempt to reconcile with his daughter. Much to his surprise and joy, she not only accepts him back into her life, but she also introduces him to the granddaughter he never knew he had and he crosses "kiss the most beautiful girl in the world" off the list.

Cole goes on to live to 81 years of age. When he finally passes away, he has his ashes, which were placed inside a coffee can, placed alongside Carter's, also in the same type of can, on the top of , which Carter (who has been narrating the film) mentions that Cole would have liked, as it was against the law. Matthew does this and as he does so he crosses off the last item on the Bucket List (witness something truly majestic) and places it with them and closes the small black box and reburies it in the snow. This closing makes it unclear whether Carter's ashes initially arrived during a trip made by Cole, or through Cole's behest.

The film received rather mixed reviews from critics. reported that 41 percent of reviews were positive, based on 147 reviews. It also has a 24 percent rating from their top critics. [cite web|url=http://www.rottentomatoes.com/m/bucket_list/ |title=The Bucket List - Rotten Tomatoes |accessdate=2008-05-04 |publisher=] reported the film had an average score of 40 out of 100, based on 33 reviews. [cite web|url=http://www.metacritic.com/film/titles/bucketlist |title=Bucket List, The (2007): Reviews |accessdate=2008-01-19 |publisher=] , who has , criticised the film's portrayal of cancer sufferers, writing in his review that "The Bucket List" thinks dying of cancer is a laff riot followed by a dime-store epiphany." [ [http://rogerebert.suntimes.com/apps/pbcs.dll/article?AID=/20080110/REVIEWS/801100301/1023 The Bucket List :: rogerebert.com :: Reviews ] ]

Named one of the [http://www.nbrmp.org/awards/awards.cfm?award=Top%20Ten%20Films Top Ten Films of the Year] by the .

A score album was released on , , from Varèse Sarabande featuring composer 's original score for the film as well as a selection of newly recorded themes from Shaiman's previous scoring projects including "", "", "", "Mother", "North", "", "", "", "". It also features a re-arranged version of the theme, "", titled "Printmaster" with Shaiman's own voice and lyrics in which he spoof industry's habit of tracking music in scenes where they don't belong. The full list of 23 tracks is as follows:

Theme song: John Mayer - "Say" Is NOT included on The Bucket List Soundtrack.

The film was released on and Disc , .