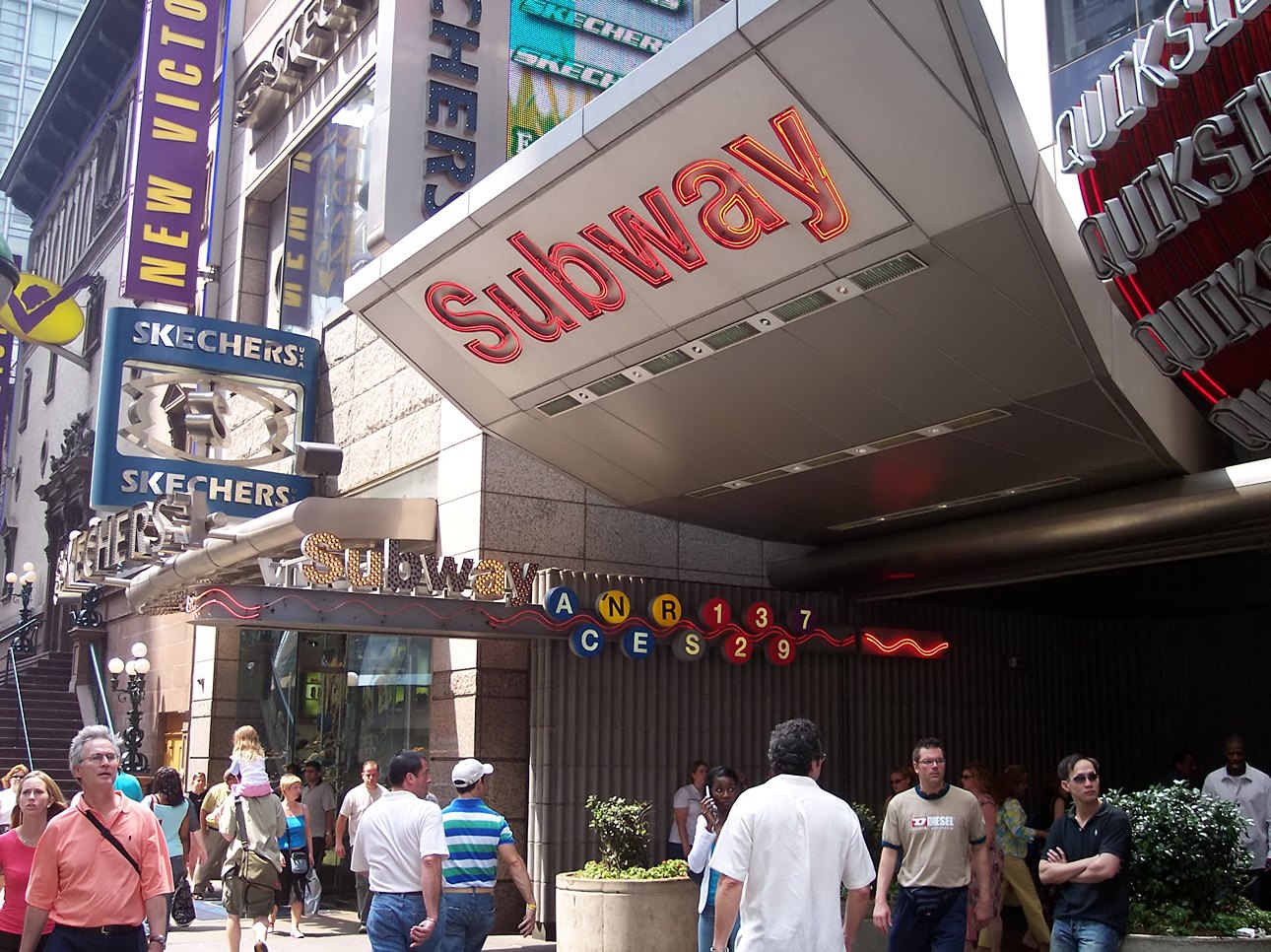 Times Square–42nd Street is the busiest station complex of the , joining four lines (three trunk lines plus the Shuttle), with a free transfer via a passageway to a fifth (42nd Street–Port Authority Bus Terminal on the (NYCS Eighth south). It lies under , at the intersection of 42nd Street, Seventh Avenue and Broadway.__TOC__ 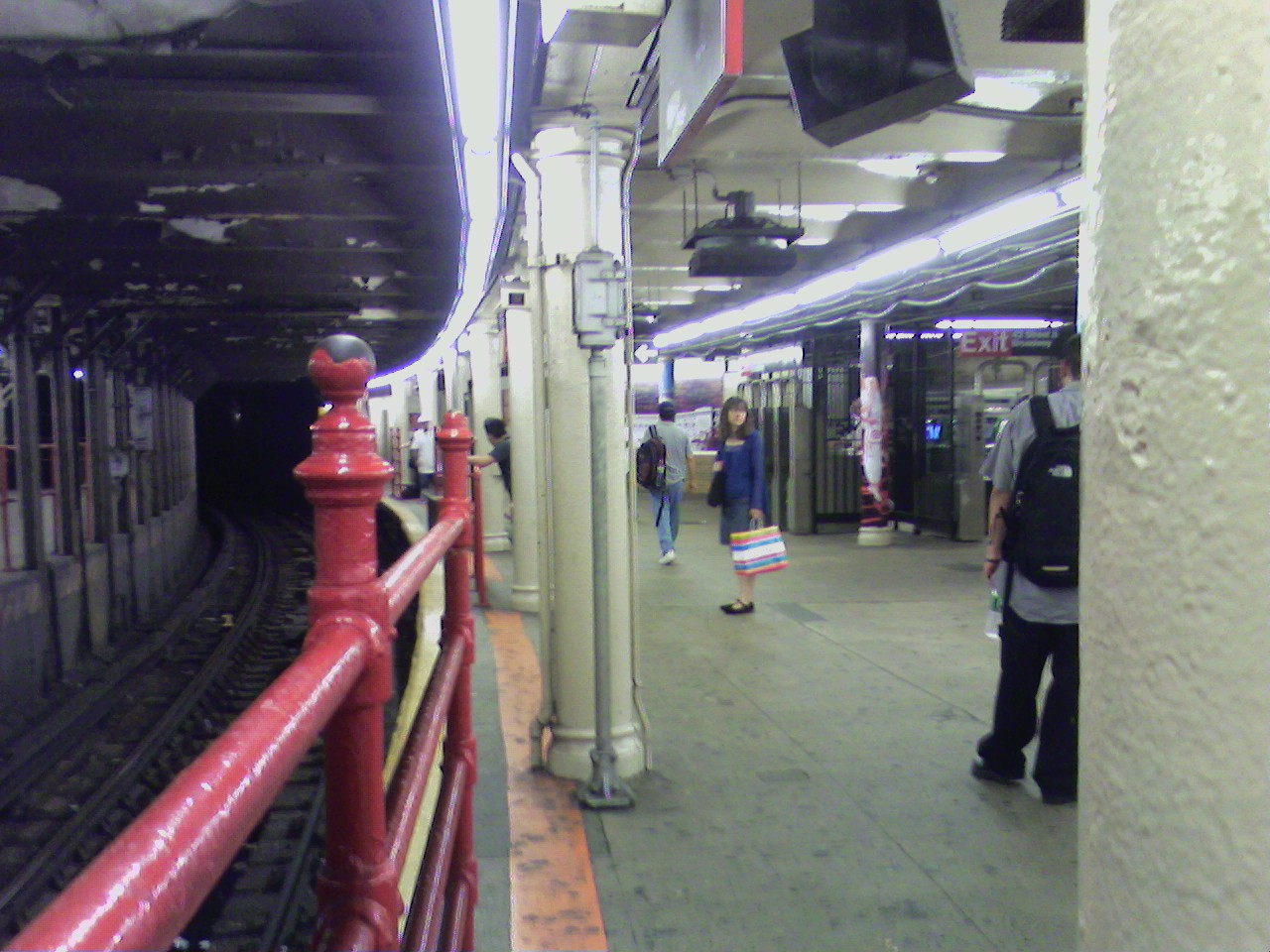 Times Square was originally a local station called "42nd Street" on New York City's first subway in . Since 1918 three shuttle tracks have served it; the southbound express track was removed and replaced by a temporary wooden platform for access to the original northbound express track. There is no track connection between the northbound local and the other two tracks anywhere along the shuttle. Platforms are located on both sides (at the old local platforms) and where the southbound express track was; all three platforms connect on the north (compass west) side. This walkway crosses the northbound local track on a bridge that can be lifted for the only access to that track, via a merge into the northbound local track along the original subway alignment (north of the current Broadway–Seventh Avenue Line station). This track merge is only used for overnight swaps and special railfan excursion trains. The other three tracks used to curve parallel to this one.

Because of the curvature on the platforms, s are used to bridge the gap between train and platform. An underpass which used to connect the original side platforms lies between the downtown local track and the two express and the uptown local tracks of the , which runs perpendicular to the shuttle. 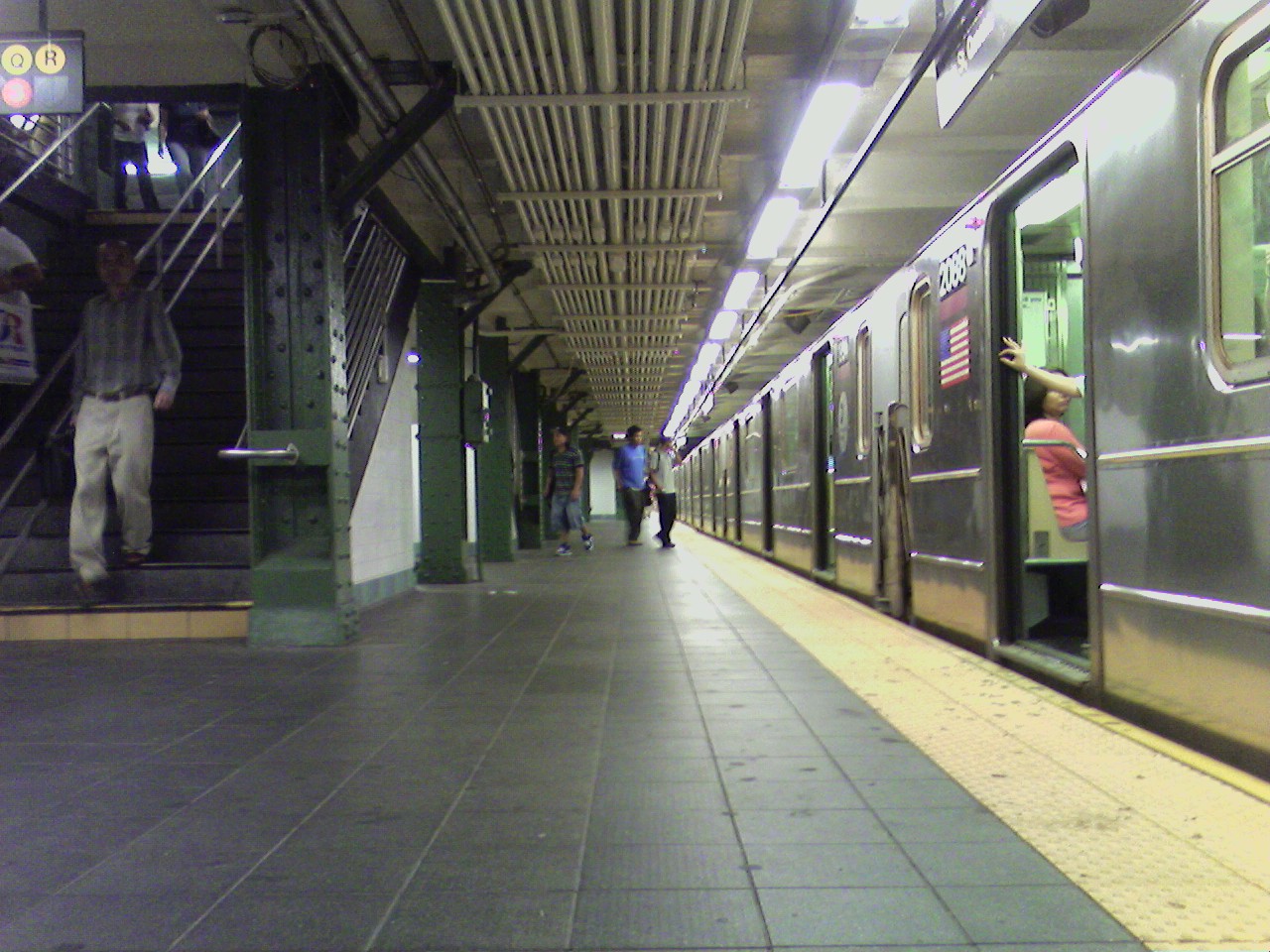 Times Square is the terminal for all NYCS|7 service. It has one island platform between the two tracks located deep below West 41st Street. Stairs, escalators and an elevator along the platform lead to various mezzanines. There are "TS" tile mosaics along the station walls. An office is located at the north (compass east) end of the platform. An elevator was recently installed and connects with the Downtown IRT 7th Ave platform and then the mezzanine.

The tracks continue south (compass west) beyond the station to an unused storage and layover area. If the Flushing Line were to be extended, as has been proposed, work would have to done to improve this stretch. The closed lower level platform at 42nd Street–Port Authority Bus Terminal on the would also have to be removed. 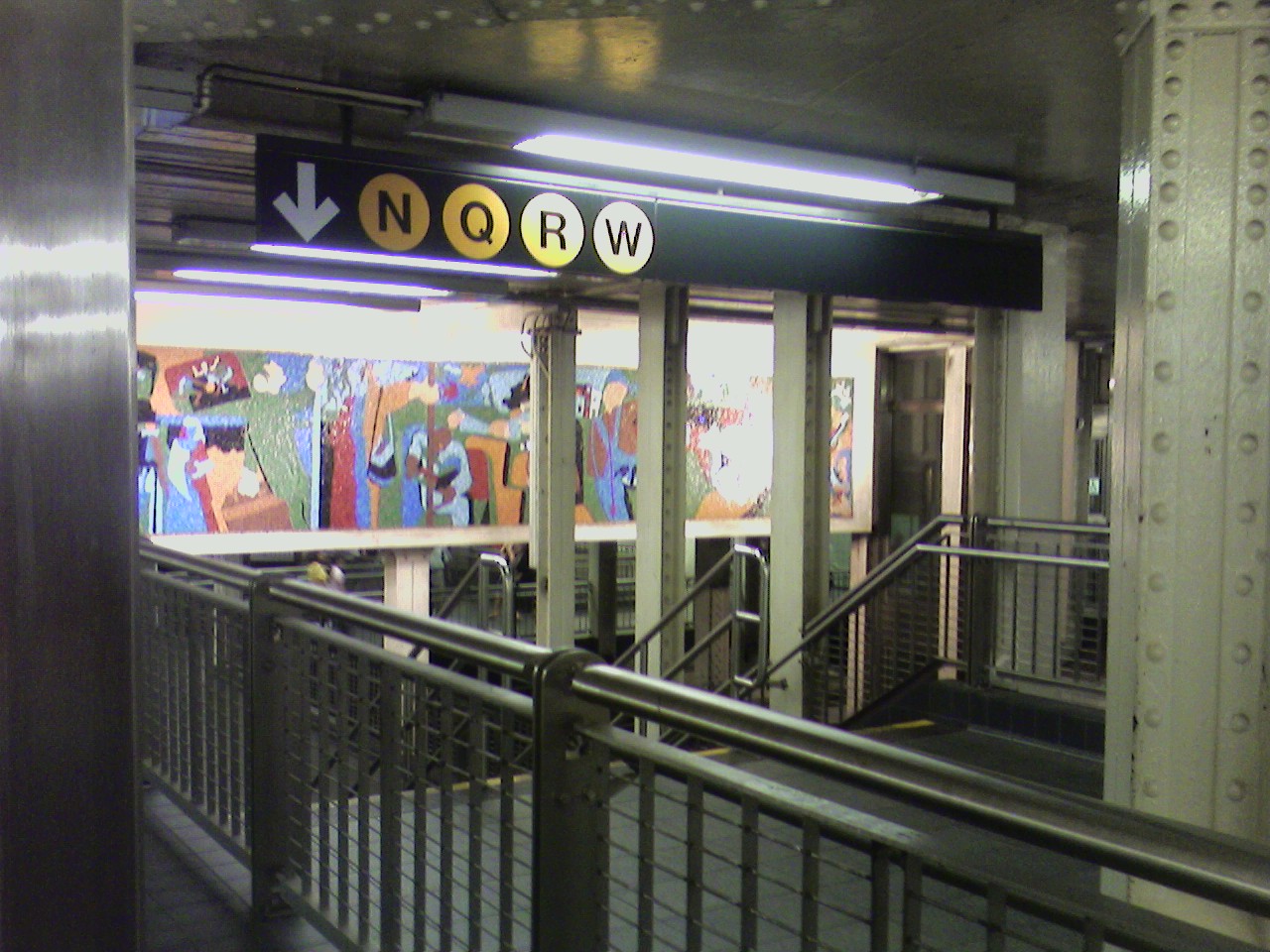 Times Square–42nd Street is an express station with four tracks and two island platforms. Connections to the other lines are at the northern end of the platforms. This station received a minor overhaul in the late 1970s. MTA did fix the station's structure and the overhaul appearance, and it repaired staircases and platform edges, removed pedestrian ramps, and replaced lighting. In 2004-2006, the station received a major overhaul and repairs, including upgrading the station for and restoring the original late 1910s tiling. MTA repaired the staircases, retiled the walls, added new tiling on the floors, upgraded the station's lights and the public address system, installed ADA yellow safety threads along the platform edge, and installed new signs and new trackbeds in both directions. 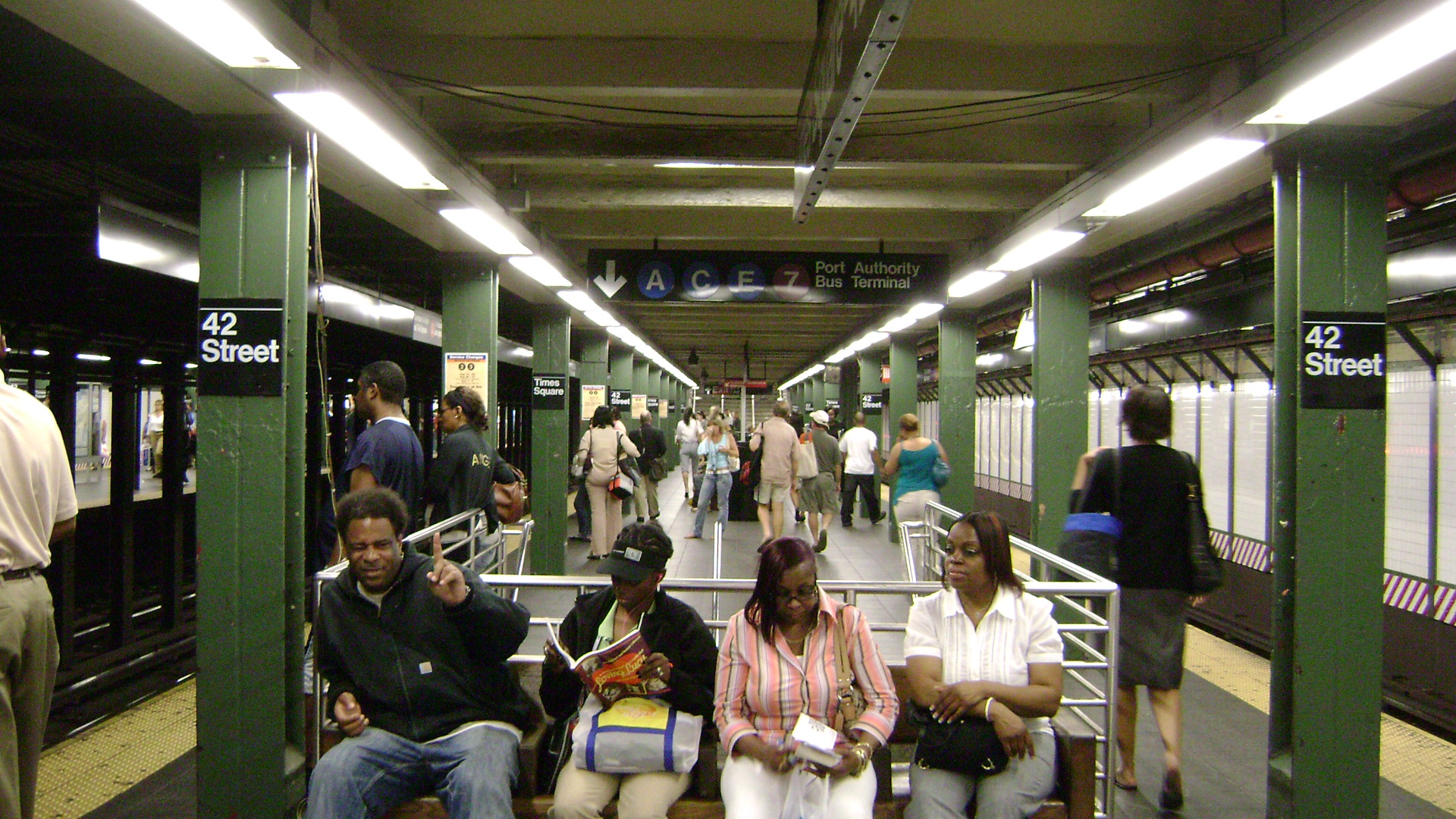 Times Square–42nd Street is an express station with four tracks and two island platforms. Access to the other lines is provided at the northern end and in the center of each platform. An elevator was recently installed and is now in operation but there are very few signs in the station complex that show where they are.

Just south of the station, a fifth center track begins, formed by a connection from each express track. This track splits back into the two express tracks just before 34th Street–Penn Station. This center track was used in the past for turning rush hour "Gap Trains", which would head back up to The Bronx rather than Lower Manhattan or Brooklyn. It is currently used for turning NYCS|3 trains, which terminate here during late nights. [cite press release | title = Service Enhancements on 3 Line | publisher = MTA New York City Transit | date = | url = http://www.mta.info/mta/news/releases/?en=080724-NYCT109 | accessdate = 2008-07-26]

This section of line was the site of a 1928 wreck which killed 16 people, the second worst in New York City history.

The free transfer between the IRT and BMT was added in 1948. The free passageway, which runs west one block to the 42nd Street–Port Authority Bus Terminal on the , was added a while later. Since 1991, the ceiling of the passageway has featured a series of -style signs that form a poem called the "Commuter's Lament" by Norman B. Colp. The poem goes: "Overslept/So tired/If late/Get fired./Why bother?/Why the pain?/Just go home/Do it again./" with the last panel being a picture of a bed. The panels were part of an art project that was supposed to last only one year, but was never removed.

This station has been undergoing total reconstruction in stages starting in 1994. The reconstruction included a new entryway on the south side of 42nd Street between Seventh Avenue and Broadway, featuring a bright neon and colored glass flashing sign with the train route symbols and the word "Subway". The street level at this site features restored original "Times Square" mosaics from the Contract I station walls (now used by the shuttle), and both escalators and stairs lead into the complex. There are also similar renovated entrances on the northwest and southwest corners of Seventh Avenue and 42nd Street, the latter of which has both esclators and , while the former has only stairs.

In , a 44 million renovation of the complex began. The goal is to reduce congestion and improve rider access, comfort and safety by improving visual lines and increasing pedestrian capacity. The main corridor is being widened 15 feet, and the number of sharp corners reduced; ADA compliance is being introduced with s; new are being built; and other corridors are being widened. The mezzanine above the , formerly a record shop, now features a large oval balcony looking over the trackway and has reduced the sense of claustrophobia described by many riders. In 2004, four unisex stall bathrooms were opened on the mezzanine between the IRT and BMT lines; they are staffed and maintained by employees of the , the local Business Improvement District. The record shop re-opened in 2007 on the south side of the IRT/BMT corridor.

The mezzanine has been a major featured spot for subway performers ever since the opening of the station. "" controls the spot, which is located by the escalators, opposite the shuttle to Grand Central. Musicians of all types, from musical saw to a brass band, perform there daily.