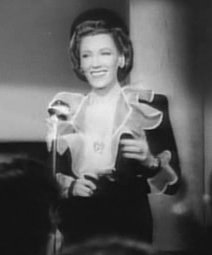 Menken's final Broadway appearance was in an unsuccessful play named "The Laughing Woman", which ran for less than a month in 1937. She was active on radio in the 1940s (notably recreating her performance opposite Judith Anderson in a 1946 radio adaption of "The Old Maid") and a major presence behind the scenes in the theater world, especially at the . She received a special posthumously in 1966 for her work.

The first of her three husbands was actor . She was Bogart's first wife. They were married at the in on , , they divorced , . She married Dr. Henry T. Smith on , and they divorced in 1947, then married George N. Richard in October, 1948 who survived her. Helen Menken died from a heart attack at a party at on , at the age of 64.

Menken made a in in 1925 for , filmed in the short-lived DeForest process. The film is preserved in the Maurice Zouary collection at the .