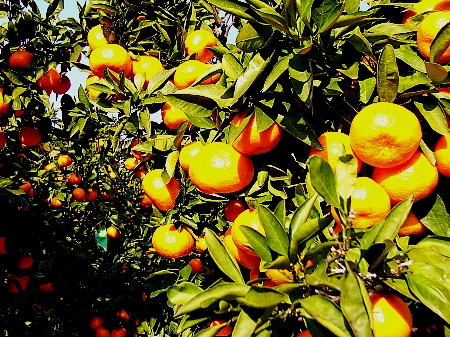 "Citrus unshiu" is a seedless and easy-peeling of Chinese origin, but introduced to the West via Japan. In Japan, it is known as unshu mikan (Japanese: , "unshū mikan"). In China, it is known as Wenzhou migan (zh-cp|c=温州蜜柑|p=Wēnzhōu Mìgān). The Japanese name is a result of the local reading of the same characters used in the Chinese, the name meaning "Honey Citrus of Wenzhou" in both languages. It is also often known as "Seedless mandarin" (zh-cp|c=无核桔|p=wúhé jú) or as a satsuma.

Its fruit is sweet and usually seedless, about the size of other s ("Citrus reticulata"), smaller than an orange. One of the distinguishing features of the satsuma is the distinctive thin, leathery skin dotted with large and prominent oil glands, which is lightly attached around the fruit, enabling it to be peeled very easily in comparison to other citrus fruits. The satsuma also has particularly delicate flesh, which cannot withstand the effects of careless handling. The uniquely loose skin of the satsuma, however, means that any such bruising and damage to the fruit may not be immediately apparent upon the typical cursory visual inspection associated with assessing the quality of other fruits. In this regard, the satsuma is often categorised by citrus growers as a hit-and-miss citrus fruit, the loose skin particular to the fruit precluding the definitive measurement of its quality by sight and feel alone.

The Chinese and Japanese names reference , a city in the Province of China known for its citrus production. However, it has also been grown in since ancient times, and the majority of cultivars grown in today were cultivated in Japan and reverse-introduced into China in modern times.

s are not the same variety as the unshiu or satsuma mandarin.

The "mikan" originates from , a city in province in . Recorded cultivation of the "Wenzhou Migan" date back some 2400 years. It was listed as a tribute item for Imperial consumption in the . The best record of the cultivation of this variety in ancient China is from the "Jijia Julu" (zh-cl|c=记嘉桔录|l=Citrus Records of Jijia), written by Han Yan, the governor of the region and published in [http://www.wznm.com/cpzs.asp?id=32] . This book records the various citrus varieties then grown in , cultivation, pest control, storage, and processing of each variety.

The "mikan" was introduced to by the Buddhist monk Chie (智慧), who passed through on his way back from Wutai Mountain. This was further developed into new cultivars, with one mutation recorded as early as 1429 [http://www.mikan.gr.jp/sisetu/siryoukan/rekisi/hyou.html] .

In 1916, a number of Japanese cultivars were introduced to . These, and new cultivars developed from them, now dominate orchards in Wenzhou. The traditional centre of "mikan" production in is in the town of Wushan, in the of .

Export to the West

In 1876 during the , "mikan" were brought to the United States from the in , by a spouse of a member of the U.S. Embassy. While the species originates from Japan, it does not originate from the Satsuma Province in particular. The towns of , Satsuma, Florida and were named after this fruit. It has been planted in colder locations, because of its cold-hardiness. A mature satsuma tree can survive down to -9.5 degrees Celsius, 15 degrees Fahrenheit for a few hours. Of the edible citrus varieties, only the is more cold-hardy. Satsumas rarely have any thorns, an attribute that also makes them popular. They can be grown from seed, which takes about 8 years until the first fruits are produced, or grafted onto other citrus rootstocks, trifoliate orange being one of the most popular.