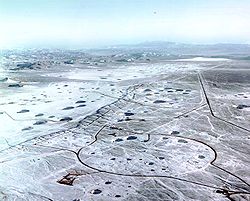 Bunker-busting nuclear weapons, also known as earth-penetrating weapons (EPW), are a type of nuclear weapon designed to penetrate into soil, rock, or concrete to deliver a nuclear warhead to a target. These weapons would be used to destroy hardened, underground military bunkers buried deep in the ground. In theory, the amount of radioactive nuclear fallout would be reduced from that of a standard, air-burst nuclear detonation because they would have relatively low explosive yield. However because such weapons necessarily come into contact with large amounts of earth-based debris, they may, under certain circumstances, still generate fallout. Warhead yield and weapon design have changed periodically throughout the history of the design of such weapons. An underground explosion releases a larger fraction of its energy into the ground, compared to an explosion at or above the surface which releases most of its energy into the atmosphere.

While conventional bunker busters utilize several methods to penetrate concrete structures, these are for the purpose of destroying the structure directly, and are generally limited in how much of a bunker, or system of bunkers they can destroy by depth and their relatively low explosive force (versus nuclear weapons). The primary difference between conventional and nuclear Bunker Busters, is that while the conventional version is meant for one target, the nuclear version can destroy an entire underground bunker system in one hit.

The main principles in modern bunker design are largely centered around survivability to nuclear war. As a result of this both American and former Soviet sites reached a state of "super hardening" involving principle defenses against the effects of a nuclear weapon, spring or counterweight (in the case of the R-36) mounted control capsules, thick (3-4 feet for the Minuteman command capsule) heavily reinforced with rebar and steel. These systems were designed to survive at their base a near miss of 20 megatons. The reason for this is that the seismic forces of an air burst of 20 megatons does not impart shockwaves strong enough to overcome their countermeasures, and due to things like depth, soil type, rock formations, etc, the predictability of the outcome is highly variable.

A nuclear bunker buster negates most of the countermeasures involved in the protection of underground bunkers. By penetrating the ground it directs all of its energy into it, this means that a relatively low yield may be able to produce seismic forces beyond those of an air burst or even groundburst of a weapon with twice its yield. Additionally the weapon by imparting the kinetic energy at depth has the ability to impart more severe horizontal shockwaves which many bunker systems are not explicitly designed to combat. further, the explosive force being expelled into the ground directly and at depth keeps the fission and fusion products more limited in immediate distribution, as opposed to carrying them high into the upper atmosphere along with the rest of the vaporized debris. This means while there is fallout, it is extremely localized, making the weapon especially appealing to tactical planning, as opposed to strategic planning.

Concrete structure design has not changed much in the last 60 years. The majority of protected concrete structures in the US military are derived from standards set forth in Fundamentals of Protective Design, published in 1946 (US Army Corps of Engineers). Various augmentations, such as glass, fibers, and rebar, have made concrete less vulnerable, but far from impenetrable.

When explosive force is applied to concrete, three major fracture regions are usually formed: the initial crater, a crushed aggregate surrounding the crater, and "scabbing" on the surface opposite the crater. Scabbing, also known as "spalling," is the violent separation of a mass of material from the opposite face of a plate or slab subjected to an impact or impulsive loading (this does not necessarily mean that the barrier itself must have been penetrated at this point).

While soil is a less dense material, it also does not transmit shock waves as well as concrete. So while a penetrator may actually travel further through soil, its effect may be lessened due to its inability to transmit shock to the target.

Penetration with a hardened penetrator

Further thinking on the subject envisions a penetrator, dropped from service height of a bomber aircraft, using kinetic energy to penetrate the shielding, and subsequently deliver a nuclear explosive to the buried target.

The problems with such a penetrator is the tremendous heat applied to the penetrator unit when striking the shielding (surface) at hundreds of meters per second. This has partially been solved by using metals such as tungsten (with a much higher melting point than steel), and altering the shape of the projectile (such as an ogive).

Altering the shape of the projectile to incorporate an ogive shape has yielded substantial results. Rocket sled testing at Eglin Air Force Base has demonstrated penetrations of 100 to 150 feet (46 m) in concrete[citation needed] when traveling at 4,000 ft/s (1,200 m/s). The reason for this is liquefaction of the concrete in the target, which tends to flow over the projectile. Variation in the speed of the penetrator can either cause it to be vaporized on impact (in the case of traveling too fast), or to not penetrate far enough (in the case of traveling too slow). An approximation for the penetration depth is obtained with an impact depth formula derived by Sir Isaac Newton.

Another school of thought on nuclear bunker busters is using a light penetrator to travel 15 to 30 meters through shielding, and detonate a nuclear charge there. Such an explosion would generate powerful shock waves, which would be transmitted very effectively through the solid material comprising the shielding (see "scabbing" above).

The main criticisms of nuclear bunker busters regard nuclear fallout and nuclear proliferation. The purpose of an earth-penetrating nuclear "bunker buster" is to reduce the required yield needed to ensure the destruction of the target by coupling the explosion to the ground, yielding a shock wave similar to an earthquake. For example, the United States retired the B-53 warhead, with a yield of 9 megatons, because the B-61 Mod 11 could attack similar targets with much lower yield (400 kilotons)[citation needed], due to the latter's superior ground penetration. Thus the fallout of a B-61 Mod 11 would likely be less than that of a B-53. Supporters note that this is one of the reasons nuclear bunker busters should be developed. Critics claim that developing new nuclear weapons sends a proliferating message to non-nuclear powers, undermining non-proliferation efforts.

Critics also worry that the existence of lower-yield nuclear weapons for relatively limited tactical purposes will lower the threshold for their actual use, thus blurring the sharp line between conventional weapons intended for use and weapons of mass destruction intended only for hypothetical deterrence and increasing the risk of escalation to higher-yield nuclear weapons.[1]

Fallout from any nuclear detonation is increased with proximity to the ground. While a megaton-class yield will inevitably throw up many tons of (newly) radioactive debris, which falls back to the earth as fallout, critics contend that despite their relatively minuscule explosive yield, nuclear bunker busters create more fallout per kiloton yield. Also, because of the subsurface detonation, radioactive debris may contaminate the local groundwater.

The Union of Concerned Scientists advocacy group points out that, at the Nevada Test Site, the depth required to contain fallout from an average-yield nuclear test was over 100 meters, depending upon the weapon's yield. They contend that it is improbable that penetrators could be made to burrow so deeply. With yields between 0.3 and 340 kilotons, they argue, it is unlikely the blast would be completely contained.

Another criticism is that bunkers can be built at greater depth to make them more difficult to reach. The target's vulnerability is then limited to openings like the ventilation system, which are susceptible to conventional explosives. Proponents of nuclear bunker busters respond that deeper bunkers entail higher costs, limiting the potential enemies who can withstand nuclear bunker busters.

Politically, as well, such nuclear bunker busters are unpopular. Most targets are near cities[citation needed], critics[who?] argue, and even minimal fallout will inflict unacceptable levels of collateral damage. Furthermore, they state, the testing of new nuclear weapons would be prohibited by the proposed Comprehensive Test Ban Treaty. Although Congress refused to ratify the CTBT in 1999, the United States has adhered to the spirit of the treaty by maintaining a moratorium on nuclear testing since 1992.[2]

Finally, the need to use nuclear weapons in this role is questioned by critics[citation needed]. They argue that conventional ground-penetration weapons are able to destroy enough buried or strengthened sites to lessen or even remove the need to use nuclear technology. Other conventional weapons such as thermobaric weapons have proven effective in defeating buried targets which have not been hardened.

As early as 1944, the Wallis Tallboy bomb and subsequent Grand Slam weapons were designed to penetrate deeply fortified structures through sheer explosive power. These were not designed to directly penetrate defences, though they could do this (for example the Valentin submarine pens had ferrous concrete roofs 7 metres (23 ft) thick which were penetrated by two Grand Slams on 27 March 1945), but rather to penetrate under the target and explode leaving a camouflet (cavern) which would undermine foundations of structures above, causing it to collapse, thus negating any possible hardening. The destruction of targets such as the V3 battery at Mimoyecques was the first operational use of the Tallboy. One bored through a hillside and exploded in the Saumur rail tunnel about 18 m (60 ft) below, completely blocking it thus showing that these weapons could destroy any hardened or deeply excavated installation. Modern targeting techniques allied with multiple strikes could unquestionably perform a similar task.[3][4][5]

Development continued, with weapons such as the nuclear B61, and conventional thermobaric weapons and GBU-28. One of the more effective housings, the GBU-28 used its large mass (2,130 kg / 4,700 lb) and casing (constructed from barrels of surplus 203 mm howitzers) to penetrate 6 meters (20 ft) of concrete, and more than 30 meters (100 ft) of earth.[6] The B61 Mod 11, which first entered military service in January 1997, was specifically developed to allow for bunker penetration, and is speculated to have the ability to destroy hardened targets a few hundred feet beneath the earth.[7]

While penetrations of 20–100 feet (30 m) were sufficient for some shallow targets, both the Soviet Union and the United States were creating bunkers buried under huge volumes of soil or reinforced concrete in order to withstand the multi-megaton thermonuclear weapons developed in the 1950s and 1960s. Bunker penetration weapons were initially designed out of this Cold War context. 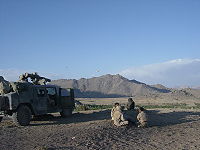 The weapon was revisited after the Cold War during the 2001 U.S. invasion of Afghanistan, and again during the 2003 invasion of Iraq. During the campaign in Tora Bora in particular, the United States believed that "vast underground complexes," deeply buried, were protecting opposing forces. Such complexes were not found. While a nuclear penetrator (the "Robust Nuclear Earth Penetrator", or "RNEP") was never built, the DOE was allotted budget to develop it, and tests were conducted by the Air Force Research Laboratory.

The Bush administration removed its request for funding[8] of the weapon in October 2005. Additionally, US Senator Pete Domenici announced funding for the nuclear bunker-buster has been dropped from the Department of Energy's fiscal 2006 budget at the department's request.[9]

While the project for the RNEP seems to be in fact canceled, Jane's Information Group speculated in 2005 that work might continue under another name.[10]