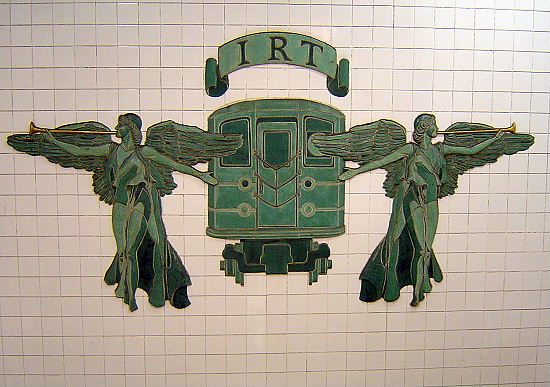 Grand Army Plaza is a station on the of the , It is located in , underneath Flatbush Avenue at its northwest intersection with . The station is close to Prospect Park, and is thus identified as Grand Army Plaza–Prospect Park in 2 and 3 service timetables. [ [http://www.mta.info/nyct/service/pdf/t2cur.pdf 2 Train Timetable] , page 9. Accessed , ] [ [http://www.mta.info/nyct/service/pdf/t3cur.pdf 3 Train Timetable] , page 9. Accessed , ]

The station has a single wide , under which the two-track passes. The two express tracks of the Eastern Parkway Line straddle the Brighton Line, underneath the local tracks. This six-track subway was built from 1914 to 1920 as part of the .

The only in the Grand Army Plaza station is a small "P".Fact|date=April 2007 A permanent art installation in the station's entrances and entitled "Wings for the IRT: The Irresistible Romance of Travel" was created in 1995 by [http://www.janegreengold.com/ Jane Greengold] , who used the station regularly when she lived in Park Slope. The and pieces of art are modeled on the original logo, and references the in the plaza above with its . The MTA's program held an opening ceremony for the artwork on , . [MTA - Arts for Transit: [http://www.mta.info/mta/aft/permanentart/permart.html?agency=nyct&line=3&artist=1&station=14 Grand Army Plaza] , accessed , ] [MTA Headquarters Press Release, [http://www.mta.info/mta/news/releases/?en=970619 MTA Installs Art In Grand Army Plaza Station] , , , accessed , ]

The construction of the station and tunnels resulted in the removal of Frederic W. Darlington's 1897 Electric Fountain

Transfers can be made to the B41, B69, and B71 bus routes. The B41 and B69 are the successors to two s that ran around Grand Army Plaza, while the B71's predecessor turned south from Union Street onto Prospect Park West to Windsor Terrace.