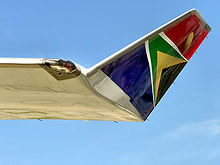 A navigation light is a colored source of illumination on an aircraft, spacecraft, or waterborne vessel, used to signal a craft's position, heading, and status. Commonly, their placement is mandated by international conventions or civil authorities.

In 1838 the United States passed an act requiring steamboats running between sunset and sunrise to carry one or more signal lights; color, visibility and location were not specified. In 1848 the United Kingdom passed regulations that required steam vessels to display red and green sidelights as well as a white masthead light. In 1849 the U.S. Congress extended the light requirements to sailing vessels. In 1889 the United States convened the first International Maritime Conference to consider regulations for preventing collisions. The resulting Washington Conference Rules were adopted by the U.S in 1890 and became effective internationally in 1897. Within these rules was the requirement for steamships to carry a second mast head light. The international 1948 Safety of Life at Sea Conference recommended a mandatory second masthead light solely for power driven vessels over 150 feet in length and a fixed sternlight for almost all vessels. The regulations have changed little since then. [1]
The International Regulations for Preventing Collisions at Sea established in 1972 stipulates the requirements for the navigation lights required on a vessel.

Navigation lights in civil aviation are required to be turned on from sunset to sunrise. High-intensity white strobe lights are part of the anti-collision light system, as well as the aviation red or white rotating beacon. The anti collision light system (either strobe lights or rotating beacon) is required for all airplanes built after March 11, 1996 for all flight activities in poor visibility, and recommended in good visibility, where only strobes and beacon are required. An example of this would be just before push back, (push and start) the beacon lights are required, to notify ground crews that the engines are about to be started. These beacon lights will stay on for the duration of the flight. While taxiing, the taxi lights are activated. When coming onto the runway, the taxi lights are deactivated and the landing lights and strobes are activated. When passing 10000 feet (or FL100) the landing lights are no longer required, and can be turned off at the pilot's discretion. The same cycle works when landing, but in reverse order. There are also other non-navigational lights on civilian commercial airliners. These include the logo lights which illuminate the company logo on the tail fin of the aircraft. These lights are optional to be turned on, however though most pilots switch them on at night for noticeable visibility from other aircraft. Modern airliners also have a wing light. These are positioned on the outer side just in front of the engine cowlings on the fuselage. These are not required to be turned on, but in some cases pilots turn these lights on for engine checks and also while passengers board the aircraft for better visibility of the ground near the aircraft.