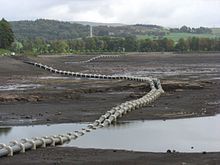 Milngavie water treatment works is the primary source of the water for the city of Glasgow (and the Greater Glasgow area) in western Scotland. Part of the Victorian Loch Katrine water project, construction was started in 1855 and the works was opened by Queen Victoria in 1859, replacing the previous water supply sourced from the River Clyde at Cuningar Loop in Dalmarnock.

Its completion led to the virtual eradication of typhoid and cholera, diseases which were widespread at the time, from the city. The success of the project was marked by the erection of the Stewart Memorial Fountain in Kelvingrove Park. The works were described by James M. Gale as worthy to "bear comparison with the most extensive aqueducts in the world, not excluding those of ancient Rome".[1]

The first aqueduct project was built under the guidance of John Frederick Bateman (an example of his engineering prowess that can still be seen working today). A second aqueduct was completed in 1901.

The works are currently operated by Scottish Water and at average demand, it can supply enough potable water to those it serves for up to 7 days. Its primary supply is via two aqueducts from Loch Katrine in the north, that run 26 miles, and can deliver up to 50,000,000 gallons a day. Milngavie itself is situated at almost 400ft above sea level - sufficient to provide adequate water pressure to the majority of Glasgow without the need for pumping. The Milngavie reservoirs distribute water to secondary reservoirs, such as Cockmuir Reservoir in Springburn Park, and various Water towers throughout the city.

The reservoirs are a common attraction for walkers, cyclists and photographers, who take advantage of the peripheral walkways that verge on Mugdock Country Park, and offer views over the Glasgow area.

Mugdock reservoir was initially built and opened in the 1850s.

The Craigmaddie service reservoir was built and opened in 1896 to cater for increased demand.

The new, third, reservoir is named Bankell Reservoir, and went into operation on the 26 May 2006. Holding 20 million gallons, the Bankell Reservoir is 80% underground to minimize ecological impact. It is one of the largest treated water holding tanks in the world.

The new reservoir and treatment works were developed in the wake of the discovery of the waterborne cryptosporidium parasite in Mugdock Reservoir on 4 August 2002, as a result of the 2002 Glasgow floods. Cryptosporidium can cause severe diarrhoea. About 140,000 people in Glasgow were affected, they were told not to drink tap water without boiling it first[2].