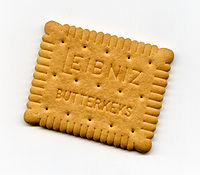 The Leibniz-Keks or Choco Leibniz is a German brand of biscuit, produced by the Bahlsen food company since 1891.

The brand name Leibniz comes from the philosopher and mathematician Gottfried Wilhelm Leibniz. The only connection between man and biscuit is that Leibniz was one of the more famous residents of Hanover, where the Bahlsen company is based. At the time when the biscuit was first made, there was a fashion for arbitrarily naming products after famous people (compare Mozartkugel).[1]

The Leibniz-Keks is a plain butter biscuit, or Butterkeks as it is known in German, inspired by the French Petit beurre created in 1886 by Lefèvre-Utile. The word Keks in Leibniz-Keks was originally a corruption of the English word "cakes" by Bahlsen. Due to the popularity of the Leibniz-Keks, Keks has since become the generic German word for a crunchy, sweet biscuit.

The original Leibniz biscuit has a simple and distinctive design. Fifty-two "teeth" frame the rectangular field, on which is imprinted "LEIBNIZ BUTTERKEKS" in capital letters. This was Hermann Bahlsen's original 1891 design. The biscuit has been featured in a series of "Monuments of German Design" by the Süddeutsche Zeitung [2].

In addition to the original Butterkeks, there are several varieties of Leibniz on the market today. These include Choco Leibniz (styled as "more chocolate than biscuit"), Leibniz Milch & Honig, Leibniz Vollkorn, and Leibniz Zoo.