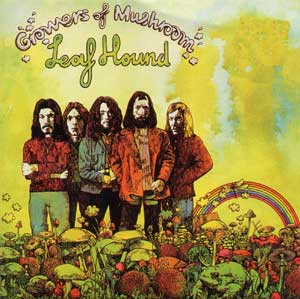 Leaf Hound formed in 1969 under their original name, .

"Growers of Mushroom" was recorded at Spot Studios in , London in late 1970. [ [http://www.leafhound.net/history.asp Leaf Hound homepage] ] Shortly after the Brooks brothers departed and Ron Thomas filled in on bass. The band toured Europe as a four piece and released the "Drowned My Life in Fear" single and the "Leaf Hound" album in on . The "Growers of Mushroom" album was released shortly after (featuring all of the tracks on the self-titled album) but by this time French had already departed to join for their album "In Hearing Of".

In 2004 Peter French put together a new incarnation of the band. In 2006 they released a limited 7" on featuring a live version of "Freelance Fiend" recorded in in September of 2005. [ [http://riseaboverecords.com/prodview.asp?prodId=55 Leaf Hound at Rise Above Records] ] The b-side is also taken from the same recording. According to their website, Leaf Hound has finished recording a new album, "Unleashed".

New album "Unleashed" was released on November 12, 2007. It Features eight all new compositions by Peter French and Luke Rayner and also a reworking of 's Breakthrough.The album has been met with critical acclaim from the music press with calling it, "As good a rock album as you could hope to hear."
noted, "An unpretentious hard rock record, relying on strong songs and powerful performances."French and Rayner were also praised for their production skills, "Preserving the Classic Rock sound."