Richard Totten "Dick" Button (born July 18, 1929) is an American former figure skater and a well-known long-time skating television analyst. He is a two-time Olympic Champion (1948, 1952) and five-time World Champion (1948–1952). He is also the only non-European man to have become European Champion.

Button is credited as having been the first skater to successfully land the double axel jump in competition in 1948, as well as the first triple jump of any kind – a triple loop – in 1952. He also invented the flying camel spin, which was originally known as the "Button camel".[1]

Dick Button was born and raised in Englewood, New Jersey. He began skating at a young age. He did not begin training seriously until the age of 12 after his father overheard him being told he would never be a good skater.[1] Soon after, Button's father sent him to New York to take lessons from ice dancing coach Joe Carroll. He trained over the summer in Lake Placid, New York, eventually switching on Carroll's recommendation to coach Gustave Lussi, who coached Button for the rest of his career.

] in Junior Pairs at the 1946 Eastern States Championships. They performed Button's singles program side by side with minor modifications and won.[1] This competition, where Button also competed as a single skater, led into the 1946 United States Figure Skating Championships.

Button won the 1946 U.S. Championships at age 16, winning by a unanimous vote. According to Button, this was the first time anyone had won the men's novice, junior, and senior titles in three consecutive years.[1] This win earned Button a spot to the 1947 World Figure Skating Championships.

At the 1947 World Championships, Button was second behind rival Hans Gerschwiler following the compulsory figures part of the competition, with 34.9 points separating them.[1] Button won the free skating portion, but Gerschwiler had the majority of first places from the judges, three to Button's two.[1] Button won the silver medal at his first Worlds. It was the last time he placed lower than first in competition.

At the competition, Button was befriended by Ulrich Salchow. Salchow, who was disappointed when Button did not win, presented him with the first International Cup Salchow had won in 1901.[1] Button later passed on this trophy to John Misha Petkevich following the 1972 Olympics and World Championships.[2]

Button faced Gerschwiler again at the 1948 European Figure Skating Championships. Button led after figures in points, having 749 points to Gerschwiler's 747.8, but Gerschwiler led in placings, with 14 to Button's 15.[1] During the free skate, Button performed his Olympic program for the first time. He won, with 11 placings to Gerschwiler's 18.[1] Following this year, when North Americans took home the men's and ladies' titles, non-Europeans were no longer allowed to enter into the European Championships. Button is the only American to have won the European Championships.[1]

At the 1948 Winter Olympics, Button led Gerschwiler by a 29.6 point lead following the figures portion of the competition, having won four of the five figures.[1] Button had been attempting the double axel jump in practice but had never landed it. In practice on the day before the free skating event, Button landed one in practice for the first time. He decided to put it into his free skate for the next day. Button landed it in competition, becoming the first skater in the world to do so. Button received eight firsts and two seconds, for a total of 10 places. Gerschwiler had 23.[1] That combined with the figures results gave Button the gold medal.[3] He became, and remains, the youngest man to win the Olympic gold in figure skating.[4] Button went on to the 1948 World Championships, where he faced Gerschwiler for the last time. Button won the event. At the time, the U.S. Championships were held after the World Championships, and Button finished his season by defending his national title.

In February 1948, Button, his coach, and his mother were in Prague to perform an exhibition. They were stranded there after the Communist uprising and had to be extracted by the U.S. Army.[1]

In 1949, Button won the Sullivan Award as the outstanding amateur athlete in the United States. He is one of 2 male figure skaters to win this award. Evan Lysacek being the other.[4]

Button had intended to attend Yale University beginning in the fall of 1947, but deferred a year due to the Olympics.[1] Although he had originally been assured that his skating would not be a problem as long as his grades were good, he was later informed that he could not continue competing if he wanted to attend Yale. On advice from people from the Skating Club of Boston, Button applied to, and was accepted at, Harvard University. Button was a full-time student at Harvard while skating competitively and graduated in 1952.

Button won every competition he entered for the rest of his competitive career. He trained at the Skating Club of Boston while attending Harvard, commuting to Lake Placid during breaks.

At the 1952 Winter Olympics, Button had the lead after figures, with 9 first places, over Helmut Seibt. Button's point total was 1,000.2 to Seibt's 957.7.[1] During his free skate, Button successfully landed the triple loop, becoming the first person to complete a triple jump in competition.[1] He then went on to defend his titles at the 1952 World Figure Skating Championships and U.S. Championships.

Button decided to enter Harvard Law School in the fall of 1952. Because of the time commitments, Button retired from amateur skating that year in order to focus on law school.[1] Following his retirement, Button signed on to skate with the Ice Capades during his law school vacations.

After his competitive skating career ended, Button toured with Ice Capades and Holiday on Ice, and completed a Bachelor of Laws (LL.B.) degree at Harvard Law School.[5] After graduation, he was admitted to the bar in Washington, D.C..[4] He co-produced "Dick Button's Ice-Travaganza" for the 1964 New York World's Fair, starring 1963 World Champion Donald McPherson, but the ice show lost money and closed after a few months. As an actor, Button has performed in movie roles such as "The Young Doctors" starring Fredrich March, to "The Bad News Bears Go to Japan" starring Tony Curtis. And, in television roles on The Hallmark Hall of Fame's "Hans Brinker]]" co-starring Tab Hunter, as well as "Dancing is a Man's Game" dancing alongside star Gene Kelly and famed New York City Ballet star Edward Villella, and appeared in "Mr. Broadway" starring Mickey Rooney. Other television appearances include "Beverly Hills 90210" and Stephen Spielberg's "The Animaniacs", "Omnibus", "Art Linkletter's House Party", numerous appearances on the Hallmark Hall of Fame, "Christmas at Rockefeller Center" with Robert Goulet and Carol Lawrence; among his other numerous guest star television appearances. On the stage, Button has starred in the touring productions of Irving Berlin's "Call Me Madam", Leonard Bernstein's"On the Town", The Gershwins' "Girl Crazy", Rodgers and Hart's "Pal Joey" , "The Teahouse of the August Moon", "Tall Story", and "Picnic" as well as in the New York City Center revivals of "Mister Roberts" and "South Pacific" to name a few. Button also studied acting with the famed Sandy Meisner at his school in New York City.

Button provided commentary for CBS's broadcast of the 1960 Winter Olympics, launching a decades-long career in television broadcast journalism. Button again did commentary for CBS's broadcast of the 1961 United States Figure Skating Championships. Then, beginning in 1962, he worked as a figure skating analyst for ABC Sports, which had acquired the rights to the U.S. Championships as well as the 1962 World Figure Skating Championships. During ABC's coverage of figure skating events in the 1960s, 1970s and 1980s, Button became the sport's best-known analyst, well-known for his frank and often caustic appraisal of skaters' performances. He won an Emmy Award in 1981 for Outstanding Sports Personality – Analyst.[5] Although other U.S. television networks aired the Winter Olympics from the 1990s onward, Button still appeared on ABC's broadcasts of the U.S. and World Figure Skating Championships until ABC removed them from its broadcast schedule in 2008. Button's reputation and influence in the sport of figure skating therefore long outlasted his own competitive and performing career. 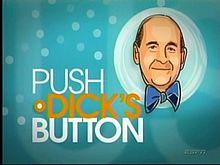 During the 2006 Games, Button appeared on loan from ABC to once again provide commentary on the Olympics. Also during the 2006 Winter Olympics, USA Network ran a show called Olympic Ice. A recurring segment, called "Push Dick's Button," invited viewers to send in questions which Button answered on the air. The segment proved very popular so ABC and ESPN put it into various broadcasts, most notably the 2007 Skate America, the 2007 United States Figure Skating Championships, and the 2007 World Figure Skating Championships.

In the fall of 2010 Button was lead Judge on the popular ABC show "Skating with the Stars" produced by BBC Worldwide, producers of the hit show "Dancing with the Stars". In 2009, Button served as a judge on the CBC's Battle of the Blades reality show. He again appeared on NBC to do commentary for 2010 Games.

As founder of Candid Productions, he created a variety of made-for-television sports events, including the "World Professional Figure Skating Championships", "Challenge of Champions", Dorothy Hamill specials for HBO, and other non-skating sporting events like Superstars."Super Teams", "Junior Superstars", "Women's Superstars", and the popular "Battle of the Network Stars"[5]

Button was inducted into the World Figure Skating Hall of Fame in 1976, the same year it was founded.[6]

Button suffered a serious head injury on July 5, 1978 when he was one of several men assaulted in Central Park by a gang of youths armed with baseball bats. According to articles on different days in the New York Times, Button was variously reported to have been passing through the park while jogging on his way to an appointment with a cabinetmaker; when he was attacked . Three persons were subsequently convicted of assault for the attacks. Contemporary news accounts and trial testimony indicated that the assailants were intending to target gay people, but there was no indication that any of the victims were targeted specifically. News accounts stated the attackers targeted persons in the Central Park Ramble area as that was an area where gay persons congregated, but that the victims were attacked at random, and that because of the random nature of the attacks ". . . the police said there was no reason to believe the victims were homosexual."[8]

On December 31, 2000, Button was skating at a public rink in New York State when he fell, fracturing his skull and causing a serious brain injury.[9] He has since recovered, and now is a national spokesman for the Brain Injury Association of America [10] as well as continuing his Award[citation needed] winning commentary for the broadcasts of The Olympic Games, and various figure skating television shows.