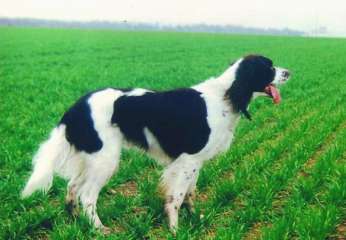 The French Spaniel (Epagneul Français) is a breed of of the type. It was developed in as a multi-purpose , capable of pointing and retrieving. The French Spaniel is recognized by the under Group 7, Section 1, Continental Pointing Dogs, 1.2 Spaniel type; related to the and the . It is rare outside its native country.

The French Spaniel is one of the tallest spaniel breeds. Males can range in height from 21 to 24 inches, females and inch shorter. Dogs can range in weight from 45 to 60 pounds.

The hair is medium, dense, with long feathers on the ears, backs of the legs and tail. It has some waviness on the chest and otherwise lies flat on the body. The color is always white with liver (very dark brown) markings. There may or may not be brown ticking in the coat. The French Spaniel's coat adapts to hot or cold climates.

The French Spaniel is an intelligent dog that looks to please its owner. It does not take to a harsh handler. It responds well to positive treatment and repetitive lessons. As they mature, they become calm loving hunting companions and makes a wonderful house dog. As puppies and young dogs French Spaniels are like every other spaniel... High energy and exuberant. They need a place to run and exercise regularly and are not well adapted to small living quarters such as apartments.

The French Spaniel was known in the 14th century, when is was used for net hunting and falconry. For net hunting the dog would point with a low elongated, "setting" style which would make it easier for the hunter to throw the net over the dog.

There was a time in the 19th century when the French Spaniel was on the verge of extinction. However, a French priest gathered the remaining French Spaniels in his kennels. There he built the lineages that are representatives of those we now have. The French Spaniel is thought to be related to a number of other hunting breeds. There is some speculation that outcrosses of the French Spaniel make it the cousin of the Small Munsterlander and the Drentse Patrijshond. Also, the Brittany Spaniel is said to be the progeny of pairings with English Setters and French Spaniels.

*Smith of the Japanese series and its sequel