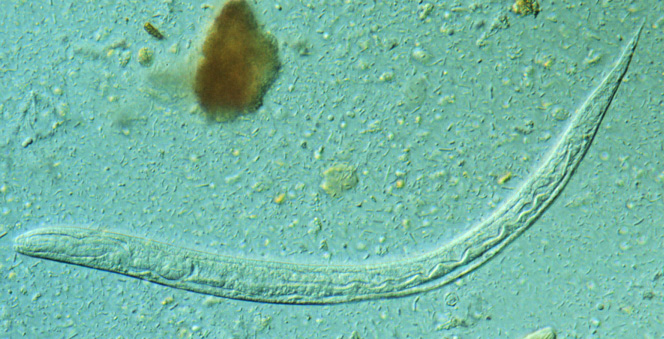 "Strongyloides stercoralis", also known as the threadworm, is the of a causing the disease of .

"Strongyloides stercoralis" is a nematode that can parasitize humans. The adult parasitic stage lives in tunnels in the mucosa of the small intestine. The genus "Strongyloides" contains 53 species [Speare R. Identification of species of "Strongyloides". In: Grove DI. (ed) Strongyloidiasis: a major roundworm infection of man. Taylor & Francis: London. 1989;11-83.] [Skerratt LF. "Strongyloides spearei" n. sp. (Nematoda: Strongyloididae) from the common wombat "Vombatus ursinus" (Marsupialia: Vombatidae). "Systematic Parasitology" 1995;32:81-89.] and "S. stercoralis" is the . "S. stercoralis" has been reported in other mammals, including cats and dogs. However, it seems that the species in dogs is typically not "S. stercoralis", but the related species "S. canis". Non-human primates are more commonly infected with "S. fuelleborni" and "S. cebus" although "S. stercoralis" has been reported in captive primates. Other species of "Strongyloides" naturally parasitic in humans, but with restricted distributions, are "S. fuelleborni" in central Africa and "S. kellyi" in Papua New Guinea.

"S. stercoralis" has a very low prevalence in societies where fecal contamination of soil or water is rare. Hence, it is a very rare infection in developed market economies and is less prevalent in urban areas in developing countries than in rural areas, where sanitation standards are poor. S. stercoralis can be found in areas with tropical and subtropical climates. [ Segarra-Newnham, M. (2007). Manifestations, diagnosis, and treatment of Strongyloides stercoralis infection. Ann Pharmacother. 41(12): 1992-2001.]

Strongyloidiasis was first described in the nineteenth century in French soldiers returning home from expeditions in IndoChina. Today, the countries of the old IndoChina (Vietnam, Cambodia and Laos) still have endemic strongyloidiasis, typical prevalences being 10% or less. Regions of Japan used to have endemic strongyloidiasis, but control programs have probably reduced prevalences markedly. Strongyloidiasis appears to have a high prevalence in some areas of Brazil and Central America. Strongyloidiasis is endemic in Africa, but the prevalence is typically low (1% or less). Pockets of strongyloidiasis have been reported from rural Italy, but current status is unknown. In the Pacific islands strongyloidiasis is rare although there have been reports of cases from Fiji. In tropical Australia, some rural and remote communities have very high prevalences of strongyloidiasis [Johnston FH, Morris PS, Speare R, McCarthy J, Currie B, Ewald D, Page W, Dempsey K. Strongyloidiasis: A review of the evidence for Australian practitioners. "Australian Journal of Rural Health" 2005;13:247-254.] . In some African countries (e.g., Zaire) "S. fuelleborni" was more common than "S. stercoralis" in parasite surveys from the 1970s, but current status is unknown. In Papua New Guinea, "S. stercoralis" is endemic, but prevalence is low. However, in some areas another species, "S. kellyi", [Dorris M, Viney ME, Blaxter ML. Molecular phylogenetic analysis of the genus "Strongyloides" and related nematodes. "Int J Parasitol" 2002;32(12):1507-17.] is a very common parasite of children in the PNG highlands and Western Province. [King SE, Mascie-Taylor CG. "Strongyloides fuelleborni kellyi" and other intestinal helminths in children from Papua New Guinea: associations with nutritional status and socioeconomic factors.P N G Med J 2004;47(3-4):181-91.]

Knowledge of the geographic distribution of strongyloidiasis is of significance to travelers who may acquire the parasite during their stay in endemic areas.

S. Stercoralis have a heterogonic life cycle which consists of a parasitic generation and a free-living generation. The parasitic has a homogenic life cycle, while the free-living has a heterogonic life cycle. The heterogonic life cycle is advantageous to the parasite because it allows for the parasite to reproduce for one or more generations in the absence of a host. First stage larvae pass out in the feces and develop in feces on the ground to infective larvae. This development can occur via two routes: directly from L1 to IL via three molts or indirectly. The "indirect" route results first in the development of free-living adult females and males which mate, females lay eggs which hatch and then develop to IL. The "direct" route gives IL faster (3 days) versus the indirect route (7-10 days), However, the indirect route results in an increase in the number of IL produced. Speed of development of IL is traded off for increased numbers. The free-living males and females of "S. stercoralis" die after one generation; they do not persist in the soil.

The infectious larvae penetrate the skin when there is contact with the soil. While S. stercoralis is attracted to chemicals such as carbon dioxide or sodium chloride, these chemicals are very non-specific. Larvae have been thought to locate their hosts via chemicals in the skin, predominantly urocanic acid, a histidine metabolite on the uppermost layer of skin that is removed by sweat or the daily skin-shedding cycle. [Safer, D., Brenes, M., Dunipace, S., and Schad, G. (2006). Urocanic acid is a major chemoattractant for the skin-penetrating parasitic nematode Strongyloides stercoralis. PNAS 104(5), 1627-1630.] Urocanic acid concentrations can be up to five times greater in the foot than any other part of the human body. Some of them enter the superficial veins and ride the blood vessels to the lungs, where they enter the alveoli. They are then coughed up and swallowed into the gut, where they parasitise the intestinal mucosa ( and ). However, research in dogs has shown that most of the larvae that penetrate the skin migrate randomly through the body until they reach the small intestine. Only females will reach reproductive adulthood in the intestine. Female strongyloides reproduce through . The eggs hatch in the intestine and young larvae are then excreted in the feces. It takes about two weeks to reach egg development from the initial skin penetration. By this process, "S. stercoralis" can cause both respiratory and gastrointestinal symptoms. Adult worms can live up to a year in dogs.

Whereas males grow to only about 0.9 mm in length, females can be anywhere from 2.0 to 2.5 mm. Both genders also possess a tiny buccal capsule and cylindrical esophagus without a posterior bulb. [Roberts, L., Janovy, Jr., J. Foundations of Parasitology. 2005. 412.] In the free-living stage, the esophagi of both sexes are rhabditiform. Males can be distinguished from their female counterparts by two structures: the spicules and gubernaculum.

An unusual feature of "S. stercoralis" is autoinfection. Only one other species in the "Strongyloides" genus, "S. felis", has the trait of autoinfection. Autoinfection is the development of L1 into small infective larvae in the gut of the host. These autoinfective larvae penetrate the wall of the lower ileum or colon or the skin of the perianal region, enter the circulation again, up to the lungs, and back down to the small intestine thus repeating the cycle. Autoinfection makes strongyloidiasis due to "S. stercoralis" an infection with several unusual features.

Persistence of infection is the first of these important features. Because of autoinfection, humans have been known to still be infected up to 65 years after they were first exposed to the parasite (e.g. World War II or Vietnam veterans). Once a host is infected with "S. stercoralis", infection is life-long unless effective treatment eliminates all adult parasites and migrating autoinfective larvae.

Many people infected are usually asymptomatic at first. Symptoms include dermatitis: swelling, itching, and mild hemorrhage at the site where the skin has been penetrated. If the parasite reach the lungs, the chest may feel as if it were burning, and wheezing and coughing may result along with pneumonia-like symptoms. Eventually, the intestines could be invaded, leading to burning pain, tissue damage, sepsis, and ulcers. In severe cases, edema may result in obstruction of the intestinal tract as well as loss of peristaltic contractions. [Roberts, L., Janovy, Jr., J. Foundations of Parasitology. 2005. 414-415.]

Immunosuppressive drugs, such as those used for tissue transplantation, (especially corticosteroids) can increase the rate of autoinfection to the point where there is an overwhelming number of larvae migrating through the lungs, and in many cases this can prove fatal. Additionally, diseases such as HTLV-1 (Human T-cell Lymphotropic Virus 1), which enhance the Th1 arm of the immune system and lessen the Th2 arm, increase the disease state. Another consequence of autoinfection is that the autoinfective larvae can carry gut bacteria back into the body. About 50% of people with hyperinfection present with bacterial disease due to enteric bacteria. Finally, a unique effect of autoinfective larvae is larva currens due to the larvae migrating rapidly through the skin. Larva currens appears as a red line that appears, moves rapidly (>5 cm/day) and then quickly disappears. It is pathogonomic for autoinfective larvae and can be used as a diagnostic criterion for strongyloidiasis due to "S. stercoralis".

Locating juvenile larvae, either rhabditiform or filariform, in recent stool samples will confirm the presence of this parasite. [Roberts, L., Janovy, Jr., J. Foundations of Parasitology. 2005. 415. ] Other techniques used include direct fecal smears, culturing fecal samples on agar plates, serodiagnosis through ELISA, and duodenal fumigation. Still, diagnosis can be difficult because of the varying juvenile parasite load on a daily basis.

The ideal method would be prevention by improved sanitation (proper disposal of feces), practicing good hygiene (washing of hands), etc., before any drug regimen is administered.

is the drug of first choice for treatment because of higher tolerance in patients [Johnston FH, Morris PS, Speare R, McCarthy J, Currie B, Ewald D, Page W, Dempsey K. Strongyloidiasis: A review of the evidence for Australian practitioners. "Australian Journal of Rural Health" 2005;13:247-254.] . was used previously, but owing to its high prevalence of side effects (dizziness, vomiting, nausea, malaise) and lower efficacy, it has been superseded by ivermectin and as second line, . However, these drugs have little effect on the majority of these autoinfective larvae during their migration through the body. Hence, repeated treatments with ivermectin have to be administered to kill adults which develop from the autoinfective larvae.

In the UK, and are currently (2007) preferred. [NHS Direct Health Encyclopedia by: Dr. Dave Cheever]

You can see a video of a sample from an infected patient in this site. [http://www.youtube.com/watch?v=ypkEHZPjpsQ]