Cowlquape is a fictional character from Paul Stewart's The Edge Chronicles 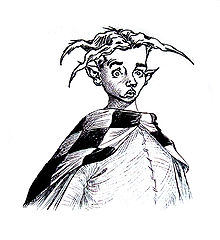 Cowlquape Pentephraxis was born in the biggest city in the Edge, Undertown. His father, Ulbus Pentephraxis was a leaguesman, and had once tricked a fleet of sky pirate ships. Ulbus was a terrible father, and had sent his son to be a sub- acolyte in the college of cloud, in the floating city of Sanctaphrax.[1]

He would have spent his life running errands and cleaning latrines, but one day the Professor of Darkness brought his friend Twig Verginix to the city. Twig had lost his speech and his memory when his sky ship, the Edgedancer, exploded. Twig did not talk, and stared blankly into space. One night, Cowlquape found him perched on the railing of a balcony during a thunderstorm. Cowlquape feared that he might jump, so he pulled him back. Somehow this brought Twig to his senses, and he was soon on a quest across the edge to regain his memory, taking Cowlquape with him. Eventually they reached the mythical spring of Riverrise, where Twig found his crewmember, Maugin. She reminded him of the impending disaster- the Mother storm was returning.

The Mother Storm came to the Edge every few millennium to rejuvenate the waters of the Edgewater river. The last time it returned, its journey was clear but now Sanctaphrax was in its way. The Mother storm would waste its energy destroying Sanctaphrax and the water would never reach Riverrise. The drought that followed would then end life on the Edge.

Twig and Cowlquape used The Stone Pilots knowledge to skyfire them back to Undertown, where the Mother storm was just arriving. Cowlquape began to hammer the great anchor pin, which held Sanctaphrax in place, and just before it gave, the Professor of Darkness thrust the great seal of office into his hand, and then hung on to the great anchor chain as it floated away.

Almost instantly, a new Sanctaphrax rock began to grow in the stone gardens, and Cowlquape became the most high academe of New Sanctaphrax. With the Edge saved, Twig sailed off to meet Maugin, leaving Cowlquape behind.

The Last of the Sky Pirates

The scholars of old Sanctaphrax had been split into two categories, earth studies and sky studies. The sky scholars had almost massacred all the earth scholars when stormphrax was discovered, and Cowlquape wanted to bring back the old arts. Many disagreed with him, and when Stone sickness caused new Sanctaphrax to crumble and sink, the great seal of office was stolen by an old enemy, Vox Verlix. He devised a turret called the Tower of Night to stand on the stricken rock, with a massive prison on the inside. In theory, when it was struck by lightning, the rock would be healed. Cowlquape was locked inside to keep him out of the way, but then the Guardians of the Night, led by Orbix Xaxis took the tower for themselves and Vox retreated to the crumbling palace of statues in Undertown.

For fifty years Cowlquape was locked in the prison, and no storm came.[2] Twig, now an old man, sailed in the last sky ship to save Cowlquape. He had never reached Riverrise, and his crew had been killed by the black water fever. He had wandered in the Deepwoods, until he met a young librarian knight, Rook Barkwater. Twig used the ship to distract the Guardians, while Rook rescued Cowlquape and reunited him with Twig.

Unfortunately the reunion was brief, because a crossbow bolt mortally wounded Twig, and an old Caterbird grabbed him in its talons to fly him to Riverrise. Fifty-two years previously, he had witnessed the hatching of the Caterbird, and it had promised to watch over him.

Cowlquape joined the librarians in the sewers of Undertown where they had been forced to hide by the Guardians of the Night[3]. It came to their attention that a Dark Maelstrom was going to come to the Edge, destroying Undertown, New Sanctaphrax and flooding the sewers. So the librarians sent spies who pretended to be traitors to their enemies, the Shrykes to come to the main library and kill them. The traitors explained that they would be unguarded, because they were all attending a ceremony.

At the edge of Undertown, they were met by all of the undertowners, old Sky pirates and a group of hunters called The Ghosts of Screetown. Cowlquape helped lead them all across The Mire, a treacherous wasteland of blowholes and muglumps. Then they continued along a rocky ledge named The Edgelands, inhabited by ghosts and the mythical Gloamglozer. when they finally reached the Deepwoods, they stopped to rest.

Their respite was short though, because news came of an army of young shrykes on their way.

The librarians, Undertowners, Ghosts and sky pirates defended themselves at the Lufwood mount, but would have lost if the Freeglade Lancers had not aided them. The group then traveled to the Freeglades, land of peace and happiness, and Cowlquape oversaw the construction of a new Great Library, an exact copy of the one he had destroyed in old Sanctaphrax.

A new goblin army invaded the Freeglades, and the attackers burned the Great library to the ground. The goblins were eventually defeated, and the librarians began to rewrite the Great library. Only one scroll survived the destruction, because Rook Barkwater had it with him at the time.

The word Kaulquappe means Tadpole in German, which is a reference to the physical attributes of the character.