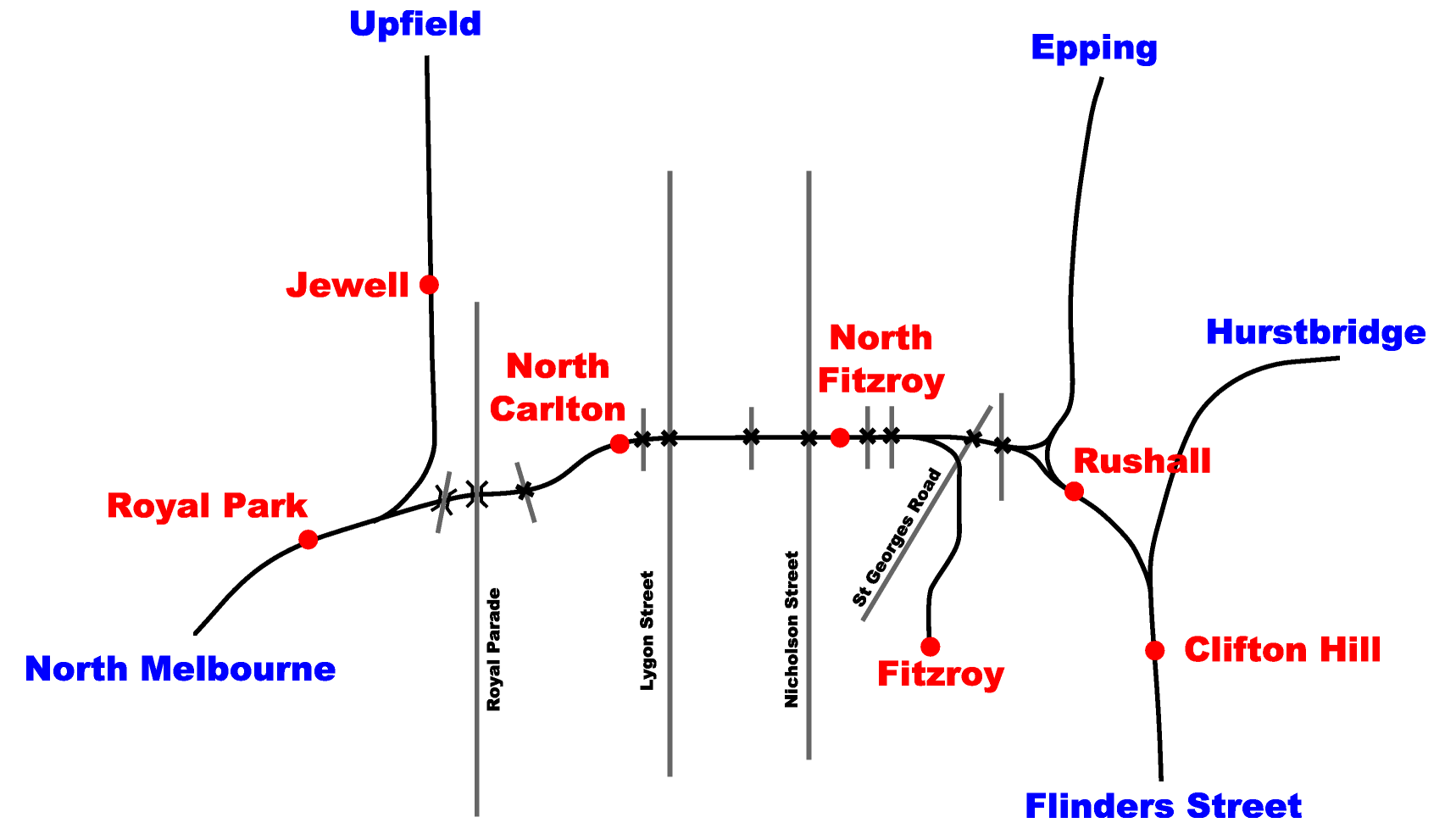 The Inner Circle was a steam era suburban railway line, (later electrified), in , . It covered the inner-northern s of Parkville, Carlton North, Fitzroy North, and Fitzroy. At its closure, it ran from Royal Park station on the Upfield line (Melway map ref: 29 F11.) to the west, to a three-way intersection with Rushall and Merri stations on today's Epping line to the east. (Melway map ref: 30 D11.) There was also a branch line to Fitzroy that opened at the same time.

The Inner Circle was opened on

As the main line

When the Inner Circle line first opened it provided two services, both originating from at the western end of the central business district. Trains bound for Heidelberg station (now on the Hurstbridge line, but then a terminus), would run to North Fitzroy station, then continue on to Victoria Park station (then known as Collingwood, and now on the Hurstbridge and Epping lines) to the south. The would then have to change ends and the train return to Clifton Hill station, then diverge east on to Heidelberg.

In December 1889, with the opening of the Whittlesea line, trains would run from Flinders Street to Whittlesea via the Inner Circle. Another service followed this route, but terminated at Preston station.

Another service was provided from Spencer Street to Fitzroy station, on its branch line. This was relegated to a short shuttle service from North Fitzroy station in October 1889, and then finally closed in May 1892.

For a short period between March and May of 1891, the Inner and Outer Circle routes formed the only route between the Eastern and Western halves of the Victorian Railways. Prior to this, the only link was via a street level tramway along the CBD edge between Flinders and Spencer Streets, which was generally only used at night. As the Viaduct between Spencer and Flinders Street stations was in its final stages of construction (December 1888 to May 1891), the two new lines allowed trains to bypass the construction site.

In 1901 a new direct line was built from the central at the southern edge of the CBD though the inner eastern suburb of Collingwood. This removed the need for the reversal manoeuvre for Heidelberg bound trains, and Preston suburban service also ran via the new line, while Whittlesea trains continued to use the Inner Circle, albeit only from Spencer Street.

With the loss of the main line services on the Inner Circle, a series of 'roundabout' services were experimented with from 1901. By 1906 a regular steam operated service was established from Princes Bridge to North Fitzroy station via Clifton Hill, and by 1919 this service was running every hour off peak.

Traffic on the line was discouraged by the circuitous route, and competition with more direct trams to the city. Off peak services were cut to every 30 minutes from , but from 20 minute headways were restored on Saturday and Sunday afternoons. The passenger service was finally cancelled on and North Carlton and North Fitzroy stations closed to passenger business.

From 1948 the Fitzroy line was used almost exclusively for trains. The overhead wiring on the line was dismantled in 1961, with only that needed for Epping trains and for shunting at the Royal Park end retained. Significant changes occurred to the line in 1965, when the line was singled and both legs of the triangle at the eastern end of the line closed. This left just the single line from Royal Park to Fitzroy remaining for goods services. The line was officially closed on .

In the same year a new loop service was introduced in the form of the underground City Loop, which directly encircles the CBD. [Department of Infrastructure: [http://www.doi.vic.gov.au/Doi/Internet/transport.nsf/AllDocs/74164766E0CEAF95CA25700500122952?OpenDocument City Loop history] ]

After the final closure, the rails were removed (except for some short sections at former s which can still be seen today), and the reservation converted into a "rail-trail" path. Some signals and parts of level crossing gates also survive, with remaining overhead gantry sections still carrying railway electrical current between the Upfield and Epping railway lines.

Of the three stations, only North Carlton still stands, and was converted into a community centre. [ [http://www.theage.com.au/news/national/phantom-trails/2005/12/28/1135732640972.html The Age: 'Phantom trails' - 29 December 2005] ] North Fitzroy station is now a slight rise in the "rail trail" path east of Nicholson Street, which was realigned in 2002 to traverse the length of the former platform. Fitzroy station is presently a development site.

From Rushall station to Royal Park station the rail reserve has become a linear park which provides part of the for cyclists, connecting the to the in the network of shared use bicycle paths for .