Felix Ho (born Fei Yin Felix Ho 何斐然 June 2, 1977 in British Hong Kong) is a canine behaviorist, animal trainer, writer, athlete, and international Schutzhund/IPO competitor. He is one of the most recognized dog sport competitors and behaviorists in the world, and one of the few dog trainers that has gained international popularity. He is highly skilled in the art of canine training especially in Schutzhund and Belgian Ring Sport.

Born in British Hong Kong, Ho was always interested in animals, even from a very young age of three. Eventually when Ho was seven, his parents decided to adopt a puppy from RSPCA for their only son. Due to the family's lack of experience about bringing up a dog, they had to return the German Shepherd puppy back to RSPCA after a short time. However, this event somehow planted a strong desire in Ho’s head about working with dogs in his adult life. Recognizing their child’s talent and ability with animals, Ho’s parents decided to send him to Australia for high school when he turned 16. Ho continued his pursuit of animal studies, leading him into La Trobe University in Melbourne for his Biological Science degree.

During his university years, Ho began his dog training career as an amateur enthusiast, practiced much of his hands-on skills with a wide range of dogs, and worked with experienced trainers including Jim Tokis and Kris Kotsopoulos. At the beginning, Ho dealt with a large number of pet dogs and problem dogs, mainly teaching them a set of basic commands so they would obey their owners. As the more he learned, the more fanatical he became, after about two years, training dogs in obedience and security simply could not satisfy his hunger for knowledge anymore. He wanted to enhance his skills and ability and to compete in the world wide sport involved with working dogs, and began training and competing in Schutzhund/IPO. Eventually, this passion with canine learning, behaviour, and psychology has become his lifestyle and chosen career. 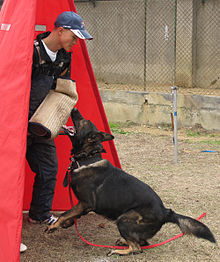 Ho working as a decoy in one of his seminars.

In 2002, with the encouragement of Tokis and Kotsopoulos, Ho started his own business CanineSquad, a dog training and behavioral consultation company based in Melbourne, Australia. The services include solving behavioral problems for dog owners, training their dogs in obedience and protection, and educating the general public the proper way to communicate with their pets. The company maintained a healthy growth and Ho became increasingly successful and popular in both sport and business. 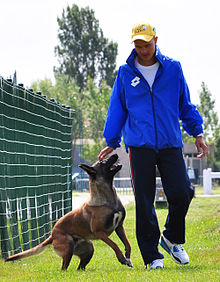 In 2005, Ho met two times Schutzhund/IPO world champion - Haruo Masuda from Japan. Sharing the same passion, the two became friends instantly. Masuda saw the talent and desire in the youngster, and encouraged him to further his career in Europe. A few months later, Ho decided to leave behind everything in Australia, to further develop his finesse with working dogs and to pursue his dream to compete on the world stage of dog sports. He migrated to Belgium, a country renowned for its history and knowledge in animal training and breeding.

In one of Ho's interviews in 2006 in Slovenia, he stated that his training system is strongly based on a foundation of Clicker Training, and later polished off with Aversive Stimulation. Since moving to Europe, Ho's training has evolved to a vastly meticulous structure, being heavily influenced by his current coach and mentor - Julien Steenbeke. Ho has also worked with several other influential individuals in the working dog and sporting dog world including Johan Weckhuyzen, Bart Bellon, Christoph Joris, and Mario Verslijpe. In the 2006 FCI IPO World Championship, Ho's handling style has noticeably refined and closely resembled the style of Verslijpe, who guided Ho's training from 2005 to 2006. 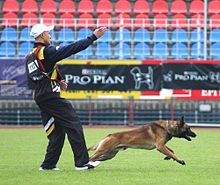 In 2008, Felix Ho was selected for the FMBB World Championship hosted in Slovenia with his Malinois bitch Eclipse van de Duvetorre. Being the youngest dog in the whole championship, Eclipse made a spectacular performance in her Protection routine, scoring 99 points. In 2009, the duo took out one of the highest (98 points) in Tracking and ranked 16th in the FMBB World Championship in Czech Republic, and 19th in FCI Austria. 2009 was also the year for Ho to finally earn the respect from the Belgians when he took out the Special CAC Championship Selection in Gerpinnes leading by 13 points. He is currently one of the best IPO trainers and competitors in Belgium.

Felix Ho is renowned for his imposing presence, combined with a powerful yet elegant style in his performance, which frequently attract a great deal of attention in major events.

Felix resides in Belgium and continues his pursuit of canine behaviour, breeding, and international dogsport competitions. He travels frequently around the world to give seminars and private consultations regarding canine training. 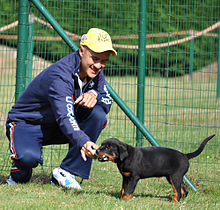 First and currently only IPO judge in Hong Kong and China

First and currently only person from Hong Kong, China, and Australia to title a dog to Mondio Ring 1

First person to title a Belgian Shepherd to IPO3 in Australia 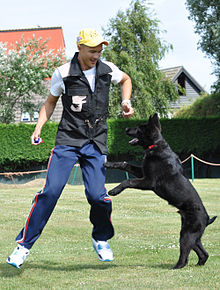