M-3 (Michigan highway)
This article is about the state highway in Michigan; for other uses, see M3 (disambiguation)

M-3 is a north–south state highway in the US state of Michigan in the Detroit metropolitan area. For most of its length, M-3 is known as Gratiot Avenue. Locals pronounce the street name /ˈɡræʃɨt/.

Gratiot is one of five major avenues (along with Woodward, Michigan, Grand River, and Jefferson) planned by Judge Augustus Woodward in 1805 that extend from downtown Detroit in differing directions. Gratiot runs northeast from downtown and extends into Macomb County.

The total length of the route is approximately 29 miles (46 km). The road passes through Detroit, Eastpointe, Roseville, Clinton Township, Mount Clemens, and Chesterfield Township. For much of the way it runs more or less parallel with M-97 to the north and with Interstate 94 to the south.

The first route to be designated M-3 was Schaefer Highway, running north-south from U.S. 25/Dix Avenue in Melvindale to U.S. 16/Grand River Avenue in western Detroit. When MDOT chose to reserve single-digit M-routes for planned superhighways (which eventually became Interstate and U.S. routes), the original M-3 became M-39. Since M-39 was moved to Southfield Road in 1959, Schaefer Highway has been a locally maintained road. 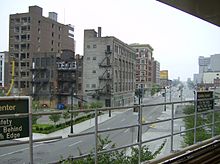 Gratiot Avenue, then also called "the Gratiot road," was established in 1835 as the road leading to Fort Gratiot near Port Huron, which was in turn named for Colonel Charles Gratiot, an engineer with Harrison's army in the War of 1812.[2]

Originally bearing M-19 for its entire length from Detroit to Port Huron, Gratiot Avenue was redesignated as part of U.S. 25, while M-19 was relocated westward, connecting Yale with U.S. 25/Gratiot Avenue at the village of Muttonville (now part of Richmond), just north of 31 Mile Road. In 1963, the portion of U.S. 25 north of 23 Mile Road was turned over to local control as U.S. 25 was routed over the newly-constructed I-94 freeway, with the exception of the stretch between New Haven and Muttonville, which was again designated M-19 as an extension of that route.

M-3 returned to existence in 1973, when U.S. 25, now paralleling I-94 and I-75 for most of its length through Michigan and Ohio, was truncated at Cincinnati. Following the trend of M-1 being established for Woodward Avenue (former U.S. 10), the former U.S. 25 portion of Gratiot was designated M-3, along with a southwestern extension down Fort Street to Clark Avenue (I-75 exit 47A). This provided an international connection via the Ambassador Bridge to Ontario's Highway 3. In 2001, a series of exchanges between MDOT and the City of Detroit resulted in the downtown portion of M-3 being broken up; the Fort Street portion was redesignated as an extension of M-85, while M-3 was realigned to continue from Gratiot to Randolph Street, where the route ends at an intersection with Jeffersion Avenue (the southern termini of M-10 and unsigned BS I-375). The northern terminus of M-3 remains at I-94 exit 243, 23 Mile Road, in Chesterfield Township about two miles (3.2 km) west of New Baltimore. (M-29 connects to the junction from the east.)