Hardy was born in 1945 in Corona del Mar, Newport Beach, California.[1] He attended the San Francisco Art Institute and graduated with a Bachelor of Fine Arts in printmaking.[1] Hardy was a student of Sailor Jerry Collins and, through his association, was able to study tattooing in Japan in 1973 with the Japanese classical tattoo master Horihide.[2] He became recognized for incorporating Japanese tattoo aesthetic and technique into his American style work.[1]

In 1982, Hardy and his wife formed Hardy Marks Publications. Under this marque, they began publishing the five-book series Tattootime.[3] Hardy Marks has gone on to publish more than 25 books about alternative art[4], including catalogs of Hardy's work and that of Sailor Jerry Collins.

Today, Hardy is retired from tattooing.[5] He oversees and mentors the artists at his San Francisco studio, Tattoo City. Since the 1960s, he has concentrated heavily on non-tattoo based art forms, especially printmaking, drawing, and painting.

In 2000, he was appointed by Oakland Mayor Jerry Brown to the city's Cultural Arts Commission.[6] 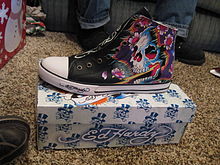 In 2002, Hardy licensed Ku USA, Inc. to produce a line of clothing based on his art. Within two years, the collection had drawn the interest of Saks companies. Hardy and Ku USA formed Hardy Life LLC, which holds the trademark ownership as well as the copyrights to all his images.

In May 2009, Iconix Brand Group announced it had acquired a 50% interest in Hardy Way, LLC, the owner of the Ed Hardy brand and trademarks.[7]