/ˌɛdwərd ˈmaɪbrɪdʒ/; 9 April 1830 – 8 May 1904) was an English photographer who spent much of his life in the United States. He is known for his pioneering work on animal locomotion which used multiple cameras to capture motion, and his zoopraxiscope, a device for projecting motion pictures that pre-dated the flexible perforated film strip.[1]

Born Edward James Muggeridge, he changed his name several times early in his US career. First he changed his forenames to the Spanish equivalent Eduardo Santiago, perhaps because of the Spanish influence on Californian place names. His surname appears at times as Muggridge and Muygridge (possibly due to misspellings), and Muybridge from the 1860s.

In the 1870s he changed his first name again to Eadweard, to match the spelling of King Edward shown on the plinth of the Kingston coronation stone, which was re-erected in Kingston in 1850. His name remained Eadweard Muybridge for the rest of his career.[2] However, his gravestone bears a further variant, Eadweard Maybridge.

He used the pseudonym Helios (Greek god of the sun) on many of his photographs, and also as the name of his studio and his son's middle name.[3]

Muybridge was born at Kingston-on-Thames, England on April 9, 1830. He emigrated to the US, arriving in San Francisco in 1855, where he started a career as a publisher's agent and bookseller. He left San Francisco at the end of the 1850s, and after a stagecoach accident in which he received severe head injuries, returned to England for a few years.

While recuperating back in England, he took up photography seriously sometime between 1861 and 1866, where he learned the wet-collodion process.[4][5]

He reappeared in San Francisco in 1866 and rapidly became successful in photography, focusing principally on landscape and architectural subjects, although his business cards also advertised his services for portraiture.[6] His photographs were sold by various photographic entrepreneurs on Montgomery Street (most notably the firm of Bradley & Rulofson), San Francisco's main commercial street, during those years.

Muybridge began to build his reputation in 1867 with photos of Yosemite and San Francisco (many of the Yosemite photographs reproduced the same scenes taken by Carleton Watkins). Muybridge quickly gained notice for his landscape photographs, which showed the grandeur and expansiveness of the West, published under his pseudonym Helios.[7] In the summer of 1873 Muybridge was commissioned to photograph the Modoc War, one of the US Army's expeditions against West Coast Indians.[8]

Stanford and the galloping question

Muybridge's The Horse in Motion.

In 1872, former Governor of California Leland Stanford, a businessman and race-horse owner, had taken a position on a popularly-debated question of the day: whether all four of a horse's hooves are off the ground at the same time during the trot. Up until this time, most paintings of horses at full gallop showed the front legs extended forward and the hind legs extended to the rear. [9] Stanford sided with this assertion, called "unsupported transit", and took it upon himself to prove it scientifically. Stanford sought out Muybridge and hired him to settle the question.[10]

In later studies Muybridge used a series of large cameras that used glass plates placed in a line, each one being triggered by a thread as the horse passed. Later a clockwork device was used. The images were copied in the form of silhouettes onto a disc and viewed in a machine called a Zoopraxiscope. This in fact became an intermediate stage towards motion pictures or cinematography.

In 1877, Muybridge settled Stanford's question with a single photographic negative showing Stanford's Standardbred trotting horse Occident airborne at the trot. This negative was lost, but it survives through woodcuts made at the time. By 1878, spurred on by Stanford to expand the experiment, Muybridge had successfully photographed a horse in fast motion.[11]

Another series of photos taken at the Palo Alto Stock Farm in Stanford, California, is called Sallie Gardner at a Gallop or The Horse in Motion, and shows that the hooves do all leave the ground — although not with the legs fully extended forward and back, as contemporary illustrators tended to imagine, but rather at the moment when all the hooves are tucked under the horse as it switches from "pulling" with the front legs to "pushing" with the back legs. [10] This series of photos stands as one of the earliest forms of videography.

Eventually, Muybridge and Stanford had a major falling-out concerning this research on equine locomotion: Stanford published a book The Horse in Motion which gave no credit to Muybridge despite containing his photos and his research, possibly because Muybridge lacked an established reputation in the scientific community. As a result of Muybridge's lack of credit for the work, the Royal Society withdrew an offer to fund his stop-motion photography. Muybridge subsequently filed a lawsuit against Stanford, and lost.[10]

In 1874, still living in the San Francisco Bay Area, Muybridge discovered that his wife had a lover, a Major Harry Larkyns. On 17 October, he sought out Larkyns and said, "Good evening, Major, my name is Muybridge and here's the answer to the letter you sent my wife"; he then killed the Major with a gunshot.[12]

Muybridge was put on trial for murder. One aspect of his defense was a plea of insanity due to a head injury that Muybridge had sustained following his stagecoach accident. Friends testified that the accident dramatically changed Muybridge's personality from genial and pleasant to unstable and erratic. The jury dismissed the insanity plea, but he was acquitted for "justifiable homicide". The episode interrupted his horse photography experiment, but not his relationship with Stanford, who paid for his criminal defense.[13]

After the acquittal, Muybridge left the United States for a time to take photographs in Central America, returning in 1877. He had his son, Florado Helios Muybridge (nicknamed "Floddie" by friends), put in an orphanage. Muybridge believed Larkyns to be his son's true father, although as an adult, the son bore a remarkable resemblance to Muybridge. As an adult, Floddie worked as a ranch hand and gardener. In 1944 he was hit by a car in Sacramento and killed.[14] 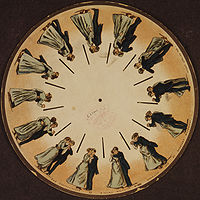 A phenakistoscope disc by Muybridge (1893).

The phenakistoscope – a couple waltzing

Muybridge often travelled back to England, and on March 13, 1882 he lectured at the Royal Institution in London in front of a sell out audience that included members of the Royal Family, notably the future King Edward VII.[15] He displayed his photographs on screen and described the motion picture via his zoopraxiscope.[15]

At the University of Pennsylvania and the local zoo Muybridge used banks of cameras to photograph people and animals to study their movement. The models, either entirely nude or with very little clothing, were photographed in a variety of undertakings, ranging from boxing, to walking down stairs, to throwing water over one another and carrying buckets of water. Between 1883 and 1886 he made a total of 100,000 images, working under the auspices of the University of Pennsylvania. They were published as 781 plates comprising 20,000 of the photographs in a collection titled Animal Locomotion.[16] Muybridge's work stands near the beginning of the science of biomechanics and the mechanics of athletics.

Recent scholarship has pointed to the influence of Étienne Jules de Marey on Muybridge's later work. Muybridge visited Marey's studio in France and saw Marey's stop-motion studies before returning to the U.S. to further his own work in the same area. However, whereas Marey's scientific achievements in the realms of cardiology and aerodynamics (as well as pioneering work in photography and chronophotography) are indisputable, Muybridge's efforts were to some degree artistic rather than scientific. As Muybridge himself explained, in some of his published sequences he substituted images where exposures failed, in order to illustrate a representative movement (rather than producing a strictly scientific recording of a particular sequence).

Similar setups of carefully timed multiple cameras are used in modern special effects photography with the opposite goal of capturing changing camera angles with little or no movement of the subject. This is often dubbed "bullet time" photography.

At the Chicago 1893 World's Columbian Exposition, Muybridge gave a series of lectures on the Science of Animal Locomotion in the Zoopraxographical Hall, built specially for that purpose in the "Midway Plaisance" arm of the exposition. He used his zoopraxiscope to show his moving pictures to a paying public, making the Hall the very first commercial movie theater.[17]

Eadweard Muybridge returned to his native England for good in 1894, published two further, popular books of his work, and died on 8 May 1904 in Kingston upon Thames while living at the home of his cousin Catherine Smith, Park View, 2 Liverpool Road. The house has a British Film Institute commemorative plaque on the outside wall which was unveiled in 2004.[18] Muybridge was cremated and his ashes interred at Woking in Surrey.

Many of Muybridge's photographic sequences have been published since the 1950s as artists' reference books.[citation needed] Cartoon animators often use Muybridge's photos as a reference when drawing their characters. Since 1991, the company Optical Toys has published Muybridge sequences in the form of movie flipbooks.

Composer Philip Glass's 1982 opera The Photographer is based on Muybridge's murder trial, with a libretto including text from the court transcript. A promotional music video featured an excerpt of the opera dramatizing the murder and trial, and included a considerable number of Muybridge images.

The play Studies in Motion: The hauntings of Eadweard Muybridge debuted in 2006, a co-production between Vancouver's Electric Company Theatre and the University of British Columbia Theatre. While blending fiction with fact, it tells the story of Muybridge's obsession with cataloguing animal motion. The production started touring in 2010.

In 2007, Canadian poet Rob Winger wrote Muybridge's Horse: a poem in three phases, a long poem nominated for the Governor General's Award for Literature, Trillium Book Award for Poetry, and Ottawa Book Award. It documented his life and obsessions in a 'poetic-photographic' style. It won the CBC Literary Award for Poetry.

In 1985, the music video for Larry Gowan's single "(You're A) Strange Animal" prominently featured animation rotoscoped from Muybridge's work. In 1986, a galloping horse sequence was used in the background of the John Farnham music video for the song "Pressure Down". In 1993, the rock band U2 made a video of their song "Lemon" into a tribute to Muybridge's techniques. In 2004, the electronic music group The Crystal Method made a music video to their song "Born Too Slow" which was based on Muybridge's work, including a man walking in front of a background grid.

Kingston University in London, UK has a building named in recognition of Muybridge's work as one of Britain's most influential photographers.

In addition, Muybridge's work has influenced:

A collection of Muybridge's equipment, including his original biunial[clarification needed] slide lantern and Zoopraxiscope projector, can be viewed at the Kingston Museum in Kingston upon Thames, South West London. The University of Pennsylvania Archives in Philadelphia, Pennsylvania hold a large collection of Muybridge's photographs, equipment, and correspondence.[20]

From April 10 through July 18, 2010, the Corcoran Gallery of Art in Washington, DC mounted a major retrospective of Muybridge's work entitled Helios: Eadweard Muybridge in a Time of Change. The exhibit has received favorable reviews from major publications including the New York Times.[24]

An exhibition bringing together around 150 of Muybridge's works took place in autumn 2010 at the Tate Britain, Millbank, London.[25] An exhibition of important items bequeathed by Muybridge to his birthplace of Kingston upon Thames, entitled Muybridge Revolutions, opened at the Kingston Museum on September 18, 2010 (exactly a century since the first Muybridge exhibition at the Museum) and ran until February 12, 2011.[26]