Dot matrix
For other uses including the printer and display types, and fictional characters of this name, see Dot matrix (disambiguation). 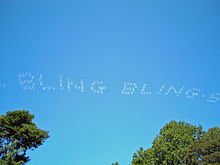 A dot matrix is a 2-dimensional array of LED used to represent characters, symbols and images.

Typically the dot matrix is used in older computer printers and many digital display devices. In printers, the dots are usually the darkened areas of the paper. In displays, the dots may light up, as in an LED or CRT display, or darken, as in an LCD, however multicolour LCDs are sometimes initially dark and light up.

In the context of printers, the term mainly refers to impact printers, with a column of 8, 9 or 24 "pins" hitting an ink-impregnated fabric ribbon, like a typewriter ribbon, onto the paper. It was originally contrasted with daisy wheel printers and line printers.

Almost all modern computer printers also create their output as matrices of dots, but use a different technology like laser printing or inkjet printing, and are not called Dot Matrix printers. Dot Matrix printers survive where multi-part forms are needed, as the impact can make a carbonless copy, for security purposes.

A dot matrix is useful for marking materials other than paper. In manufacturing industry, many marking applications use dot matrix inkjet or impact methods. This can also be used to print 2D matrix codes, e.g. Datamatrix.

An LED matrix is a simple form of dot matrix display, useful both for industrial displays as well as for hobbyist human–machine interfaces. It consists of a 2-D matrix of LEDs with their cathodes joined in rows and their anodes joined in columns (or vice versa). By controlling the flow of electricity through each row and column pair it is possible to control each LED individually. By scanning across rows, quickly flashing the LEDs on and off, it is possible to create characters or pictures to display information to the user.[1] The refresh rate is typically fast enough to prevent the human eye from detecting the flicker.

Dot Matrix is the name of a character on the acclaimed CGI show ReBoot.

Dot Matrix is also the name of a character in the 1987 Mel Brooks film Spaceballs.