The Olive Tree (Italian: L'Ulivo) was a denomination used for several successive centre-left Italian political coalitions from 1995 to 2007.

The historical leader and ideologue of these coalitions was Romano Prodi, Professor of Economics and former leftist Christian Democrat, who invented the name and the symbol of The Olive Tree with Arturo Parisi in 1995.

On 21 April 1996, The Olive Tree won 1996 general election in alliance with the Communist Refoundation Party (PRC), making Romano Prodi Prime Minister of Italy. It was the first time since 1946 that the Communists, now gathered in the Democratic Party of the Left, took part in the government of the country and one of their leaders, Walter Veltroni, who ran in ticket with Prodi in a long electoral campaign, was Deputy Prime Minister.

In 1996 the coalition was formed by six parties:

Besides the external support of PRC, the coalition received the support also of some minor parties: the Italian Republican Party (PRI, social-liberal), Movement for Democracy – The Network (social-democratic), the South Tyrolean People's Party (regionalist and Christian democratic) and some other minor parties which later merged with PDS.

On 9 October 1998, the Prodi I Cabinet fell when PRC left the alliance. Since 21 October 1998 The Olive Tree was the core of the governments led by Massimo D'Alema (I and II Cabinet, 1998-2000) and by Giuliano Amato (II Cabinet, 2000-2001). When D'Alema became Prime Minister, it was the first time ever in Italy and in Europe that a heir of the communist tradition came to lead a government. 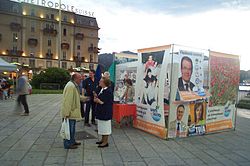 On 12 June 2004 The Olive Tree, as United in the Olive Tree (Uniti nell'Ulivo), ran in the European Parliament election gaining 31.1% of popular votes. The Olive Tree of 2004 was a stricter alliance of only four parties:

On 13 September 2004 The Olive Tree was transformed in the Federation of The Olive Tree, consisting of same four parties that campaigned together in the European elections that summer. Romano Prodi, who came back to politics in that year, after five years of President of the European Commission, was elected President of the federation, which was to become the core of a larger centre-left coalition.

On 10 February 2005, the name and logo of that larger electoral coalition was presented. Its name was The Union (L'Unione). It comprised the federation of The Olive Tree, the Communist Refoundation Party (PRC), the Party of Italian Communists (PdCI), Italy of Values (IdV), the Federation of the Greens and some other minor parties.

The Democrats of the Left (DS), Democracy is Freedom – The Daisy (DL) and the European Republicans Movement (MRE) decided to form a joint-list for the 2006 general election. Also the Italian Democratic Socialist Party (a different party from SDI) and The Italian Socialists had candidates in the list. The Italian Democratic Socialists (SDI), which were part of the federation and fight the 2004 European and the 2005 regional elections within it, decided not to take part of the joint list for the 2006 general election and, otherwise, to form a common list within The Union coalition called the Rose in the Fist along with the libertarian Italian Radicals.

DS and DL were heavily involved in the foundation of a new centre-left, the Democratic Party, a project strongly supported by Romano Prodi since his entrance into politics in 1995. This party was actually founded on 14 October 2007 and Walter Veltroni was elected party leader by voters in an open primary.