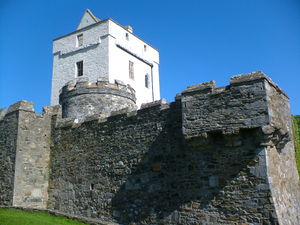 Doe Castle, or Caisleán na dTuath, near Creeslough, County Donegal, was historically a stronghold of Clan Suibhne, with architectural parallels to the Scottish Tower house. Built in the 16th c. it is one of the better preserved fortalices in the North-West of Ireland. It was here that Owen Roe O'Neill returned in 1642 to lead the Irish Confederate Army during the Wars of the three kingdoms.

The castle sits on a small peninsula, surrounded on 3 sides by water, with a moat cut into the rock of the landward side. The structure consists mainly of high outer walls around an interior bawn with a 4-storey tower-house/keep.