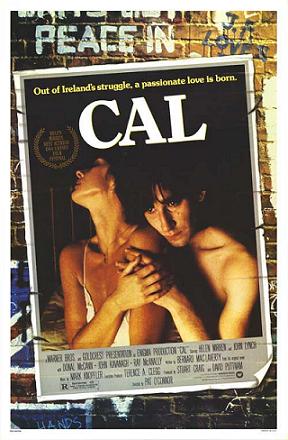 
"Cal" is a 1984 film based on the novela Cal written by who also wrote the script. The film was directed by Pat O'Connor.

Cal (Lynch) is a young catholic member of the in 1970s Northern Ireland. He is used as a driver on a nighttime murder of a member of the . The murder takes place at the victim's home in view of his family. The victim's dying words are a call for his wife, Marcella.

One year later Cal learns that the victim's widow is a librarian, Marcella (Mirren), a woman. Cal, burdened with guilt over his role in the murder, seeks to leave the IRA, but is pressured to remain a member. He and his father live in the city, where they are threatened with Unionist gangs and marches on their street. Cal, wishing to atone in some way for assisting in the murder of Marcella's husband, seeks work in her family's (protestant) home. Initially he works as hand on their farm, and later moves into a small cottage on their land. Marcella is not happy in her home, feeling trapped by her deceased husband's family. Over time Cal and Marcella begin a love affair; during this time Marcella is unaware of Cal's role in her husband's death.

Eventually, Cal is found by his IRA unit and is threatened with murder if he does not continue working as a driver. While he is Christmas shopping for Marcella and her child, he is abducted by the IRA. The car is stopped by a British Army checkpoint; in the ensuing gunfire, Cal escapes and makes his way to Marcella's home, where he confesses his role in the murder to her.

Cal was pursued to the house by the RUC, and in the film's final scene both Cal and Marcella are seen in their respective 'prisons' - Cal on his way to prison in the police van, Marcella 'prisoner' in the home of her in-laws.