listen (help·info) is a town and a province in the region of Basilicata, in southern Italy. It is the capital of the province of Matera. The town lies athwart a small canyon, which has been eroded in the course of years by a small stream, the Gravina. 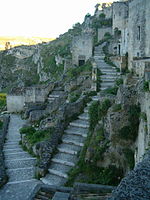 The area of what is now Matera has been settled since the Palaeolithic. The city was allegedly founded by the Romans in the 3rd century BC, with the name of Matheola after the consul Lucius Caecilius Metellus. In AD 664 Matera was conquered by the Lombards and became part of the Duchy of Benevento. In the 7th and 8th centuries the nearby grottos were colonized by both Benedictine and Greek-Orthodox monastic institutions. The 9th and 10th centuries were characterized by the struggle between Saracens, Byzantines and the German emperors, including Louis II, who destroyed the city. After the settlement of the Normans in Apulia, Matera was ruled by William Iron-Arm from 1043. After a short communal phase and a series of pestilences and earthquakes, the city in the fifteenth century became an Aragonese possession, and was given in fief to the barons of the Tramontano family. In 1514, however, the population rebelled against the oppression and killed Count Giovanni Carlo Tramontano. In the seventeenth century Matera was handed over to the Orsini and then became part of the Terre d'Otranto di Puglia. Later it was capital of Basilicata, a position it retained until 1806, when Joseph Bonaparte reassigned it to Potenza. In 1927 it became capital of the Matera province. On September 21, 1943, the Materani rose against the German occupation, the first Italian city to fight against the Wehrmacht.

Matera has gained international fame for its ancient town, the "Sassi di Matera" (meaning "stones of Matera"). The Sassi originate from a prehistoric (troglodyte) settlement, and are suspected to be some of the first human settlements in Italy. The Sassi are houses dug into the calcareous rock itself, which is characteristic of Basilicata and Apulia. Many of these "houses" are really only caverns, and the streets in some parts of the Sassi often are located on the rooftops of other houses. The ancient town grew in height on one slope of the ravine created by a river that is now a small stream. The ravine is known locally as "la Gravina". In the 1950s, the government of Italy forcefully relocated most of the population of the Sassi to areas of the developing modern city. However, people continued to live in the Sassi, and according to the English Fodor's guide:

Until the late 1980s this was considered an area of poverty, since these houses were, and in most areas still are, mostly unlivable. Current local administration, however, has become more tourism-oriented, and has promoted the re-generation of the Sassi with the aid of the European Union, the government, UNESCO, and Hollywood. Today there are many thriving businesses, pubs, and hotels.

Matera preserves a large and diverse collection of buildings related to the Christian faith, including a large number of rupestrian churches carved from the soft volcanic rock of the region.[1] These churches, which are also found in the neighboring region of Puglia, were listed in the 1998 World Monuments Watch by the World Monuments Fund.

Matera Cathedral (1268–1270) is an important monument, and has been dedicated to Santa Maria della Bruna since 1389. Built in an Apulian Romanesque architectural style, the church has a 52m tall bell tower, and next to the main gate is a statue of the Maria della Bruna, backed by those of Saints Peter and Paul. The main feature of the façade is the rose window, divided by sixteen small columns. The interior is on the Latin cross plan, with a nave and two aisles. The decoration is mainly from the 18th century Baroque restoration, but recently a Byzantine-style fourteenth-century fresco portraying the Last Judgment has been discovered.

Two other important churches in Matera, both dedicated to the Apostle Peter, are San Pietro Caveoso (in the Sasso Caveoso) and San Pietro Barisano (in the Sasso Barisano). San Pietro Barisano was recently restored in a project by the World Monuments Fund, funded by American Express. The main altar and the interior frescoes were cleaned, and missing pieces of moldings, reliefs, and other adornments were reconstructed from photographic archives or surrounding fragments.[2]

There are many other churches and monasteries dating back throughout the history of the Christian church. Some are simple caves with a single altar and maybe a fresco, often located on the opposite side of the ravine. Some are complex cave networks with large underground chambers, thought to have been used for meditation by the rupestric and cenobitic monks.

Matera was built above a deep ravine called Gravina of Matera that divides the territory into two areas. Matera was built such that it is hidden, but made it difficult to provide a water supply to its inhabitants. Early dwellers invested tremendous energy in building cisterns and systems of water channels.

The Castello Tramontano of Matera in a 19th century drawing.

The Tramontano Castle, begun in the early 16th century by Gian Carlo Tramontano, Count of Matera, is probably the only other structure that is above ground of any great significance outside of the sassi. However, the construction remained unfinished after his assassination in the popular riot of 29 December 1514. It has three large towers, while twelve were probably included in the original design. During some restoration work in the main square of the town, workers came across what was believed to be the main footings of another castle tower. However, on further excavation large Roman cisterns were unearthed. Whole house structures were discovered where one can see how the people of that era lived. Found under the main square of the modern city was a large underground reservoir, complete with columns and a vaulted ceiling.

Because of the ancient and primitive scenery in and around the Sassi, it has been used by filmmakers as the setting for ancient Jerusalem. The following famous biblical period motion pictures were filmed in Matera:

Other famous movies filmed in the city include:

A chapter on Matera describing the life of the people living there in the 1930s is in the book Cristo si è fermato a Eboli ("Christ stopped at Eboli") by Carlo Levi. This book was also turned into a film.

Photos of the modern city