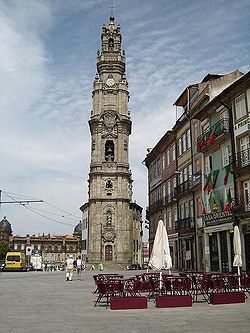 Nicolau Nasoni (or originally Niccoló Nasoni) (2 June 1691 – 30 August 1773) was an Italian artist and architect but mostly active in Portugal.

He became during the 18th century one of the most influential figures in Portuguese Baroque architecture for introducing his original and vigorous and theatrical style of Baroque and Rococo architecture.

Born in San Giovanni Valdarno, Tuscany, he received his education in Siena from Giuseppe Nicolo Nasini (1657–1736) from 1713 and 1720. During this early period he constructed a catafalque for Ferdinando de Medici (1663–1713) in the cathedral of Siena and the triumphal arch for the reception of the new archbishop. At the same time he studied architecture and painting while working with his master for the Opera del Duomo di Siena.

He was then employed, first as a painter in Rome and, between 1723 and 1725, in Malta. The new Grand Master of the Order of Malta was a Portuguese nobleman Dom António de Vilhena. Nasoni designed the Mars display for the parade in his honour. The theatrical design of this display attracted the attention of Count Francisco Picolomini, who in turn informed the Grand Master. Niccoló Nasoni then received a commission to paint the ceilings and corridors of the Magisterial Palace (Palazzo Magistrale della Valletta). His work was much appreciated and he soon became famous as a decorative painter.

At the invitation of Jerónimo de Távora e Noronha, the Dean of Porto, Portugal, whose brother Roque de Távora, he had met in Malta, Nasoni moved to Porto in 1723 (or 1725 ?), where he would remain till his death in 1773 at Porto. 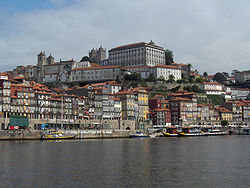 Former Episcopal Palace of Porto overlooking the Ribeira in Porto

His first recorded works in Porto were frescoes on the walls of the cathedral in 1725, which are now fading. Here he introduced to Portugal the illusionist effects, called quadratura, typical for this period. He was given the assignment to redecorate and modernise this cathedral, still Romanesque at that time. He added the granite porch (1736) of the north façade and the loggia with the azulejos. His silver altarpiece with flying angels, garlands, acanthus and twisted columns in Manueline style, is an elaborate work. He also designed the two organ-cases. He decorated the doorcases in the apse of the cathedral and in the cloister (1733–1736) with a rich variety of ornament, whose designs go back to the Florentine Bernardo Buontalenti. Next he undertook the building of the vast Episcopal Palace of Porto, next to the cathedral. Its façade is 58 m long. He designed it in 1734 but the construction only started in 1741. Only part of the palace was completed during his lifetime.

In 1729 he married D. Isabel Castriotto Rixaral, a Neapolitan woman of noble descent. She died the next year through complications of childbirth. The godfather of José, his son, was a Portuguese nobleman who asked him in 1731 to design the church and the spectacular granite tower of São Pedro dos Clérigos in Porto. This would become, according to scholars, his greatest work (1732–63). It would become the most significant and innovative architectural event in the renovation of Porto during the fist half of the 18th century. Together with his other realizations, it would transform Porto into the most Baroque of Portuguese cities. The ground plan has an oval form, something most unusual in churches. It withstood the great earthquake of 1755.

Other major works in Porto and northern Portugal :

His specialty was the talha dourada, a technique to decorate woodwork with gold leaves. This sculptured gilt wood became typical for the Portuguese baroque art. This technique was applied to altars, altarpieces, statues, retables and baldachins giving an overwhelming impression of opulence on entering a church. During the Counter Reformation this wealth of ornament was encouraged to impress the believers with the wealth and the richness of the Catholic faith. Nicolau Nasoni introduced in Portugal the concave form of the retable and the undulant arch a the top. By applying these elements, he followed the example of Andrea Pozzo (as explained in Perspectiva pictorum et architectorum). He exercised a great influence on his contemporaries with his wood sculpture. A good example is the retable on the main altar of the church of Santo Ildefonso in Porto, where he used the same thematic decorative elements as in his architectural designs (asymmetrical shells, acanthus foliage, volutes and husks, with the addition of flying angels).

In his designs for ecclesiastical silver, he used these same motifs again : winged angels, acanthus leaves and garlands (silver altarpiece in the cathedral of Porto). And again in the iron railings and gates of the chancel arch in the same cathedral.

In 1743 he entered the Clérigos Brotherhood. He was buried, at his request, in an unmarked tomb in the crypt of the Clérigos Church.

He had, as an architect and painter, an enormous influence in the northern part of Portugal even if he didn't found a school or train new followers. One of his successors was the painter and architect José de Figueiredo Seixas, who had worked under Nasoni's direction.