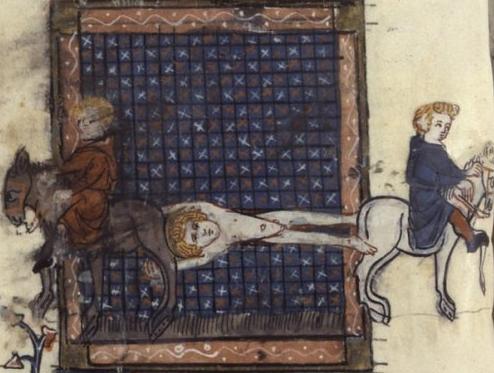 Saint Hippolytus of Rome (c. 170-c. 236) was one of the most prolific writers of the early Church. Hippolytus was born during the the second half of the 2nd century, probably in . Photius describes him in his "Bibliotheca" (cod. 121) as a disciple of , who was said to be a disciple of , and from the context of this passage it is supposed that he suggested that Hippolytus himself so styled himself. However, this assertion is doubtful.

He refused to accept the teaching of Pope Zephyrinus, whose successor, (217-222), he accused of favouring the heresies of the s, and, further, of subverting the discipline of the Church by his lax action in receiving back into the Church those guilty of gross offences. At this time he seems to have allowed himself to be elected as a rival Bishop of Rome, and continued to attack (222-230) and (230-235).

Under the persecution by Emperor , Hippolytus and Pontian were exiled together in 235 to , and it is very probably that before his death there he was reconciled to the other party at Rome, for under (236-250) his body and that of Pontian were brought to Rome. From the so-called (more precisely, the "Catalogus Liberianus", or "Liberian Catalogue") we learn that on , probably in 236, the two bodies were interred in Rome, that of Hippolytus in a cemetery on the . This document indicates that by about 255 Hippolytus was considered a Catholic martyr and gives him the rank of a priest, not of a bishop, an indication that before his death the schismatic was received again into the bosom of the Church, or that significant action was taken at least posthumously to ensure no lasting schism between both popes' followers.

The facts of his life as well as his writing were soon forgotten in the West, perhaps by reason of his schismatic activities and because he wrote in Greek dedicated to him one of his famous epigrams, making him, however, a priest of the Novatianist schism, a view later accepted by in the fifth century in his "Passion of St Hippolytus". In the Passionals of the seventh and eighth centuries he is represented as a soldier converted by , a legend that long survived in the Roman . He was also confused with a martyr of the same name who was buried in , of which city he was believed to have been a bishop. Prudentius seems to have drawn on the story of the mythological Hippolytus for his description of the death of the saint, picturing him as dragged to death by wild horses at . He described the subterranean tomb of the saint and states that he saw there a picture representing Hippolytus’ execution. He also confirms as the date on which Hippolytus was celebrated.

This account led to Hippolytus being considered the of horses. During the , sick horses were brought to Ippollitts, , , where a church is dedicated to him. [ [http://www.hertfordshire-genealogy.co.uk/data/places/ippollitts.htm Towns & Villages in Herts] ]

In 1551 a marble statue of a seated figure (originally female, perhaps personifying one of the sciences) was found in the cemetery of the Via Tiburtina and was heavily restored. On the sides of the seat was carved a , and on the back the titles of numerous writings by Hippolytus. Many other works are listed by and .

The most important of works attributed to Hippolytus is the "." Of its ten books, Book I was long known and was printed (with the title "Philosophizumena") among the works of Origen, Books II and III are lost, and Books IV-X were found, without the name of the author, in a monastery of in 1842, and published in 1851 under the title "Philosophumena", by E. Miller, who attributed it to Origen of Alexandria. It has since been attributed to Hippolytus.

Hippolytus's voluminous writings, which for variety of subject can be compared with those of , embrace the spheres of , , and , , and ecclesiastical law.

His works have unfortunately come down to us in such a fragmentary condition that it is difficult to obtain from them any very exact notion of his intellectual and literary importance.

In spite of many instances of a want of taste in his , they are distinguished by a certain sobriety and sense of proportion in his exegesis.

We are unable to form an opinion of Hippolytus as a preacher, for the "Homilies on the Feast of Epiphany" which go under his name are wrongly attributed to him.

Of the dogmatic works, "On and the " survives in a complete state. Among other things it includes a vivid account of the events preceding the end of the world, and it was probably written at the time of the persecution under , i.e. about 202.

The influence of Hippolytus was felt chiefly through his works on chronography and ecclesiastical law. His chronicle of the world, a compilation embracing the whole period from the up to the year 234, formed a basis for many chronographical works both in the East and West.

In the great compilations of ecclesiastical law that arose in the East since the 4th century, many canons were attributed to Hippolytus. How much of this material is genuinely his, how much of it worked over, and how much of it wrongly attributed to him, can no longer be determined beyond dispute even by the most learned investigation, however a great deal was incorporated into the "", which once served as the constitutional basis of law in — where he is still remembered as Abulides.

In the , the of St Hippolytus falls on , which is also the of the Feast of the . Because on the Apodosis the hymns of the Transfiguration are to be repeated, the feast of St. Hippolytus may be transferred to the day before or to some other convenient day. The Eastern Orthodox Church also celebrates the feast of "St Hippolytus Pope of Rome" on , who may or may not be the same individual.

The celebrates St Hippolytus jointly with St Pontian on . For the other dates that in the past were dedicated to him or perhaps to other saints of the same name, see .

In the fragments from his "Commentary on the Prophet Daniel", and also in his monumental "Treatise on Christ and Antichrist", Hippolytus gives an exposition of Daniel's paralleling prophecies of chapters 2 and 7, which he, in common with other Church fathers, asserts pertain to the Babylonians, Medo-Persians, Greeks, and Romans. [Froom, LeRoy Edwin, 1948, The Prophetic Faith of Our Fathers, Vol. 1, p. 268-279]

Hippolytus considered it important to discover who Antichrist is to be.