Aconitum
This article is about the herb sometimes known as wolfsbane. For other uses, see Wolfsbane (disambiguation).

These herbaceous perennial plants are chiefly natives of the mountainous parts of the northern hemisphere, growing in moisture retentive but well draining soils on mountain meadows. Their dark green leaves lack stipules. They are palmate or deeply palmately lobed with 5–7 segments. Each segment again is 3-lobed with coarse sharp teeth. The leaves have a spiral or alternate arrangement. The lower leaves have long petioles.

The tall, erect stem is crowned by racemes of large blue, purple, white, yellow or pink zygomorphic flowers with numerous stamens. They are distinguishable by having one of the five petaloid sepals (the posterior one), called the galea, in the form of a cylindrical helmet; hence the English name monkshood. There are 2–10 petals, in the form of nectaries. The two upper petals are large. They are placed under the hood of the calyx and are supported on long stalks. They have a hollow spur at their apex, containing the nectar. The other petals are small and scale-like or non-forming. The 3–5 carpels are partially fused at the base.

The fruit is a follicle, a follicle being a dry, unilocular, many-seeded fruit formed from one carpel, and dehiscing by the ventral suture in order to release seeds.

The roots of Aconitum ferox supply the Nepalese poison called bikh, bish, or nabee. It contains large quantities of the alkaloid pseudaconitine, which is a deadly poison. Aconitum palmatum yields another of the bikh poisons. The root of Aconitum luridum, of the Himalaya, is said to be as poisonous as that of A. ferox or A. napellus.

Several species of Aconitum have been used as arrow poisons. The Minaro in Ladakh use A. napellus on their arrows to hunt ibex, while the Ainu in Japan used a species of Aconitum to hunt bear.[4] The Chinese also used Aconitum poisons both for hunting[5] and for warfare.[6]

Many species of Aconitum are cultivated in gardens, having either blue or yellow flowers. Aconitum lycoctonum (Alpine wolfsbane) is a yellow-flowered species common in the Alps of Switzerland. As garden plants the aconites are very ornamental, hardy perennial plants. They thrive in the garden soils, and will grow in the shade of trees. They are easily propagated by divisions of the root or by seeds; care should be taken not to leave pieces of the root where livestock might be poisoned.

The most common plant in this genus, Aconitum napellus (the Common Monkshood) was considered in the past to be of therapeutic and of toxicological importance. Its roots have occasionally been mistaken for horseradish. When touched to one's lip, the juice of the aconite root produces a feeling of numbness and tingling. This plant is used as a food plant by some Lepidoptera species including Dot Moth, The Engrailed, Mouse Moth, Wormwood Pug, and Yellow-tail. 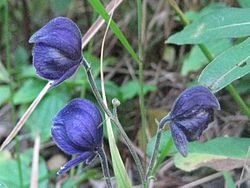 Aconite has long been used in the traditional medicine of Asia (India, China). In Ayurveda the herb is used to increase pitta (fire, bile) dosha and to enhance penetration in small doses. However more frequently the herb is detoxified according to the samskaras process and studies, cited in the detoxification section below show that it no longer possesses active toxicity. It is used in traditional Chinese medicine as a treatment for Yang deficiency, "coldness", general debilitation. The herb is considered hot and toxic. It is prepared in extremely small doses. More frequently ginger processed aconite, of lower toxicity, "fu zi" is used. Aconite is one ingredient of Tribhuvankirti, an Ayurvedic preparation for treating a "cold in the head" and fever.[7] Aconite was mixed with patrinia and coix, in a famous treatment for appendicitis described in a formula from the Jingui Yaolue (ca. 220 A.D.)[8] Aconite was also described in Greek and Roman medicine by Theophrastus, Dioscorides, and Pliny the Elder, who most likely prescribed the Alpine species Aconitum lycoctonum. The herb was cultivated widely in Europe, probably reaching England before the tenth century, where it was farmed with some difficulty, but came to be widely valued as an anodyne, diuretic, and diaphoretic.[9] In the nineteenth century much aconite was imported from China, Japan, Fiji, and Tonga, with a number of species used to manufacture alkaloids of varying potency but generally similar effect, most often used externally and rarely internally. Effects of different preparations were standardized by testing on guinea pigs.[10]

In Western medicine preparations of aconite were used until just after the middle of the 20th century, but it is no longer employed as it has been replaced by safer and more effective drugs and treatments. The 1911 British Pharmaceutical Codex regarded the medical uses and toxicity of aconite root or leaves to be virtually identical to that of purified aconitine.[11] Aconite first stimulates and later paralyses/numbs the nerves to the sensations of pain, touch, and temperature if applied to the skin or to a mucous membrane; the initial tingling therefore gives place to a long-continued anaesthetic action. Great caution was required, as abraded skin could absorb a dangerous dose of the drug, and merely tasting some of the concentrated preparations available could be fatal. The local anaesthesia of peripheral nerves can be attributed to at least eleven alkaloids with varying potency and stability.[12]

Internal uses were also pursued, to slow the pulse, as a sedative in pericarditis and heart palpitations, and well diluted as a mild diaphoretic, or to reduce feverishness in treatment of colds, pneumonia, quinsy, laryngitis, croup, and asthma due to exposure. Taken internally, aconite acts very notably on the circulation, the respiration, and the nervous system. The pulse is slowed, the number of beats per minute being actually reduced, under considerable doses, to forty, or even thirty, per minute. The blood-pressure synchronously falls, and the heart is arrested in diastole. Immediately before arrest, the heart may beat much faster than normal, though with extreme irregularity, and in animals the auricles may be observed occasionally to miss a beat, as in poisoning by veratrine and colchicum. The action of aconitine on the circulation is due to an initial stimulation of the cardio-inhibitory centre in the medulla oblongata (at the root of the vagus nerves), and later to a directly toxic influence on the nerve-ganglia and muscular fibres of the heart itself. The fall in blood-pressure is not due to any direct influence on the vessels. The respiration becomes slower owing to a paralytic action on the respiratory centre and, in warm-blooded animals, death is due to this action, the respiration being arrested before the action of the heart. Aconite further depresses the activity of all nerve-terminals, the sensory being affected before the motor. In small doses, it therefore tends to relieve pain, if this is present. The activity of the spinal cord is similarly depressed. The pupil is at first contracted, and afterwards dilated. The cerebrum is totally unaffected by aconite, consciousness and the intelligence remaining normal to the last. The antipyretic action which considerable doses of aconite display is not specific but is the result of its influence on the circulation and respiration and of its slight diaphoretic action.[citation needed]

Marked symptoms may appear almost immediately, usually not later than one hour, and "with large doses death is almost instantaneous." Death usually occurs within 2 to 6 hours in fatal poisoning (20 to 40 mL of tincture may prove fatal).[13] The initial signs are gastrointestinal including nausea, vomiting, and diarrhea. There is followed by a sensation of burning, tingling, and numbness in the mouth and face, and of burning in the abdomen. In severe poisonings pronounced motor weakness occurs and cutaneous sensations of tingling and numbness spread to the limbs. Cardiovascular features include hypotension, bradycardia, sinus tachycardia, and ventricular arrhythmias. Other features may include sweating, dizziness, difficulty in breathing, headache, and confusion. The main causes of death are ventricular arrhythmias and asystole, paralysis of the heart or of the respiratory center.[13][14] The only post-mortem signs are those of asphyxia.

Treatment of poisoning is mainly supportive. All patients require close monitoring of blood pressure and cardiac rhythm. Gastrointestinal decontamination with activated charcoal can be used if given within 1 hour of ingestion.[15] The major physiological antidote is atropine, which is used to treat bradycardia. Other drugs used for ventricular arrhythmia include lidocaine, amiodarone, bretylium, flecainide, procainamide, and mexiletine. Cardiopulmonary bypass is used if symptoms are refractory to treatment with these drugs.[14] Successful use of charcoal hemoperfusion has been claimed in patients with severe aconite poisoning.[16]

Poisoning may also occur following picking the leaves without wearing gloves; the aconitine toxin is absorbed easily through the skin. From practical experience, the sap oozing from eleven picked leaves will cause cardiac symptoms for a couple of hours.[citation needed] In this event, there will be no gastrointestinal effects. Tingling will start at the point of absorption and extend up the arm to the shoulder, after which the heart will start to be affected. The tingling will be followed by unpleasant numbness. Treatment is similar to poisoning caused by oral ingestion.

Aconitine is a potent neurotoxin that blocks tetrodotoxin-sensitive sodium channels. Pretreatment with barakol 10 mg/kg IV reduces the incidence of aconitine-induced ventricular fibrillation and ventricular tachycardia, as well as mortality. Five μg/kg IV of tetrodotoxin has the same effect. The protective effects of barakol are probably due to the prevention of intracellular sodium ion accumulation.

Canadian actor Andre Noble died during a camping trip on July 30, 2004 after the accidental consumption of aconite from monkshood.[17]

In January 2009, the British 'Curry Killer' Lakhvir Singh, killed her lover Lakhvinder Cheema with a curry dish laced with Indian Aconite. On 11 February 2010 she was sentenced to life imprisonment with a minimum term of 23 years for the murder.[18]

Both Chinese medicine and Ayurveda have methods of processing aconite to reduce its toxicity. In Chinese medicine, the traditional pao zhi or preparation of aconite is to steam it with ginger in a fairly elaborate procedure. Due to the variable levels of toxicity in any given sample of the dried herb, there are still issues with using it. Most but not all cases of aconite toxicity in Taiwan were due to the consumption of unprocessed aconite.[19][20]

According to an article by the Indian scientists Thorat and Dahanukar, "Crude aconite is an extremely lethal substance. However, the science of Ayurveda looks upon aconite as a therapeutic entity. Crude aconite is always processed i.e. it undergoes 'samskaras' before being utilized in the Ayurvedic formulations. This study was undertaken in mice, to ascertain whether 'processed' aconite is less toxic as compared to the crude or unprocessed one. It was seen that crude aconite was significantly toxic to mice (100% mortality at a dose of 2.6 mg/mouse) whereas the fully processed aconite was absolutely non-toxic (no mortality at a dose even 8 times as high as that of crude aconite). Further, all the steps in the processing were essential for complete detoxification" [21] 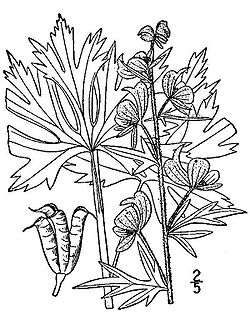 Aconitum features in literature in a number of instances:

No, no, go not to Lethe, neither twist Wolf's bane, tight-rooted, for its poisonous wine Nor suffer thy pale forehead to be kissed By nightshade, ruby grape of Proserpine…

Widdershins go when the Moon doth wane, An’ the Werewolf howls by the dread Wolfsbane.

Even those who are pure of heart, and say their prayers at night, can become a wolf, when the wolfsbane blooms and the autumn moon is bright.

Rudolph Bloom died... in consequence of an overdose of monkshood (aconite) self-administered in the form of a neuralgic liniment...

Wolf's bane is not so sharp as steel; yet it pierceth the body more subtly. Even as evil kisses corrupt the blood, so do my words devour the spirit of man. I breathe, and there is infinite dis-ease in the spirit. As an acid eats into steel, as a cancer that utterly corrupts the body; so am I unto the spirit of man.