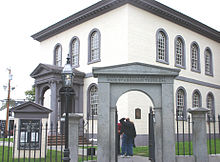 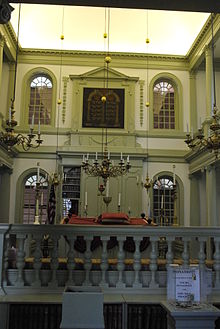 It was designed by noted British-Colonial era architect and Rhode Island resident Peter Harrison and is considered his most notable work. The interior is flanked by a series of twelve Ionic columns supporting balconies. The columns signify the twelve tribes of ancient Israel. Each column is carved from a single tree. Located at 85 Touro Street, the Touro Synagogue remains an active Orthodox synagogue. The building is oriented to face east toward Jerusalem. The ark containing the Torah is on the east wall; above it is a mural representing the Ten Commandments in Hebrew. It was painted by the Newport artist Benjamin Howland. (It is interesting to note a slight typo in the mural. The top of the three crowns in the mural is initialed to depict the "Crown of Monarchy" (Keter Malchut). The bottom right crown is initialed to depict the "Crown of Torah" (Keter Torah). The bottom left crown is meant to be initialed to depict the "Crown of Priesthood" (Keter Kehuna), but incorrectly has the Hebrew letter Lamed instead of Kaf)

The Touro Synagogue was built from 1759 to 1763 for the Jeshuat Israel congregation in Newport under the leadership of Cantor (Chazzan) Isaac Touro. The cornerstone was laid by Aaron Lopez, a prominent merchant in Newport involved in the spermaceti candlemaking business and other commercial ventures. The Jeshuat Israel congregation itself dates back to 1658 when 15 Spanish and Portuguese Jewish families arrived, probably from the West Indies, and many settled near Easton's Point.[2] The synagogue was formally dedicated 2 December 1763. Other notable leaders include Abraham Pereira Mendes and Henry Samuel Morais (1900–01).

Judah Touro, the son of Isaac Touro and his wife Reyna, made a fortune as a merchant in New Orleans. He left $10,000 ($240,000 in current dollar terms) in his will for the upkeep of the Jewish cemetery and synagogue in Newport.

A legend exists that the trap door under the tebáh (bimah) was used while the synagogue was a stop on the Underground Railroad.

In 1946, Touro Synagogue was designated a National Historic Site and is an affiliated area of the National Park Service. The synagogue was listed on the National Register of Historic Places on October 15, 1966. In 2001, the congregation joined into a partnership with the National Trust for Historic Preservation.

Annual recitation of the Washington–Seixas letter on religious pluralism

In 1790, the synagogue's warden, Moses Seixas, wrote to George Washington, expressing his support for Washington's administration and good wishes for him. Washington sent a letter in response, which read in part:

...the Government of the United States...gives to bigotry no sanction, to persecution no assistance...May the children of the Stock of Abraham, who dwell in this land, continue to merit and enjoy the good will of the other Inhabitants; while every one shall sit in safety under his own vine and figtree, and there shall be none to make him afraid. May the father of all mercies scatter light and not darkness in our paths, and make us all in our several vocations useful here, and in his own due time and way everlastingly happy."[3]

The congregation at Newport, never large, was composed of Jews with roots in the Sephardic Spanish and Portuguese diaspora, with some Ashkenazim by the eighteenth century.

The first Jewish residents of Newport, fifteen Spanish Jewish families, arrived in 1658. It is presumed that they arrived via the communities in Curaçao and Suriname. The small community worshipped in rooms in private homes for more than a century before they could afford to build a synagogue.[4]

The community purchased and dedicated the Jewish Cemetery at Newport in 1677.

The city of Newport faded in importance shortly after American independence, after the capital of Rhode Island moved to Providence, which rapidly also surpassed Newport as a seaport. The Jewish community, too small to maintain a synagogue, removed the Torah scrolls and sent them for safekeeping along with the deed to the building to Congregation Shearith Israel in New York. It still formally owns the Touro synagogue. The keys left the Jewish community and were passed to the Goulds, a Quaker family in Newport.

From the 1850s on, the building was occasionally opened for worship for the convenience of summer visitors. It was reopened on a regular basis in 1883 as Jewish life in Newport revived with the late nineteenth century immigration of eastern European Jews. The synagogue acquired a nearby building and ran a Hebrew School and other activities. In the late twentieth century, the number of Jews in Newport dwindled again. The synagogue has had a special relationship with Jewish naval families stationed in Newport. It continues to serve a small congregation, supplemented by travelers who spend the Sabbath in Newport.