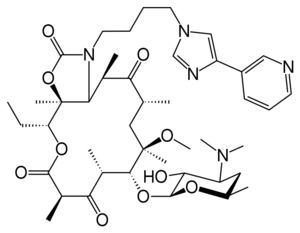 Telithromycin is a semi-synthetic derivative. It is created by substituting the sugar with a ketogroup and adding a ring in the ring. An alkyl-aryl moiety is attached to this carbamate ring. Furthermore, the carbon at position 6 has been methylated, as is the case in , to achieve better acid-stability.

French (later ) began phase II/III s of telithromycin (HMR-3647) in 1998. Telithromycin was approved by the in July 2001 and subsequently went on sale in October 2001. In the US, telithromycin received FDA approval on , .

Telithromycin is administered as tablets. The standard dosing is two 400 mg tablets to be taken together daily, with or without food.

Telithromycin is metabolized mainly in the liver, the main elimination route being the bile, a small portion is also excreted into the urine. About one third is excreted unchanged in bile and urine, the biliary route being favoured. Telithromycin's half-life is approximately ten hours.

Rare but severe side effects reported in January 2006 involve damage to the liver. Three different incidents have been reported: one ending in death, one in a and one case of drug-induced .

In the United States the FDA's Office of Epidemiology and Surveillance identified 12 cases of acute liver failure, resulting in four deaths, and an additional 23 cases of acute, serious liver injury in patients taking telithromycin up to April 2006. [http://www.fda.gov/ohrms/dockets/AC/06/slides/2006-4266s1-01-07-FDA-Brinker.ppt]

Telithromycin has been known to cause false positive readings in drug screenings for cocaine and amphetamines.Fact|date=April 2007

By April 2008, independent analysis using FDA data has linked Ketek (Telithromycin) to 18 deaths and at least 134 cases of liver damage. Some researchers say the total may be far greater. [http://www.rd.com/national-interest/consumer-safety/fda-approves-harmful-antibiotic/article.html]

Study 3014 was a key clinical trial of more than 24,000 patients which Sanofi-Aventis submitted to the FDA seeking approval for Ketek. The doctor who treated the most patients in Study 3014, Maria "Anne" Kirkman Campbell, is currently serving a 57-month sentence in federal prison after pleading guilty to defrauding Aventis and others. The indictment states that Dr. Campbell fabricated data she sent to the company [ [http://www.fda.gov/foi/nidpoe/n41l.htm] Food and Drug Administration, NOTICE OF INITIATION OF DISQUALIFICATION PROCEEDINGS AND OPPORTUNITY TO EXPLAIN (NIDPOE), Leslie Ball, 5/18/2006] . Documents including internal Sanofi-Aventis emails show that Aventis was worried about Dr. Campbell early in study 3014 but didn't tell the FDA until the agency's own inspectors discovered the problem independently [ [http://online.wsj.com/article/SB114644463095840108.html?mod=blogs] Infected Data: Fraud, Errors Taint Key Study Of Widely Used Sanofi Drug Despite Some Faked Results, FDA Approves Antibiotic; One Doctor's Cocaine Use; Company Defends Safety, By ANNA WILDE MATHEWS, Wall Street Journal, May 1, 2006] .

On February 12, 2007, the Food and Drug Administration announced a revision to the labeling of Ketek to improve patient safety. The changes included the removal of two of the three previously approved indications: acute bacterial sinusitis and acute bacterial exacerbations of chronic bronchitis. The agency determined that the balance of benefits and risks no longer supported approval of the drug for these indications. Ketek will remain on the market for the treatment of community acquired pneumonia of mild to moderate severity (acquired outside of hospitals or long-term care facilities). In addition, the FDA worked with the manufacturer to update the product labeling with a "," their strongest form of warning. Ketek's warning states that it should not be used in patients with , a disease that causes muscle weakness. [http://www.fda.gov/bbs/topics/NEWS/2007/NEW01561.html]