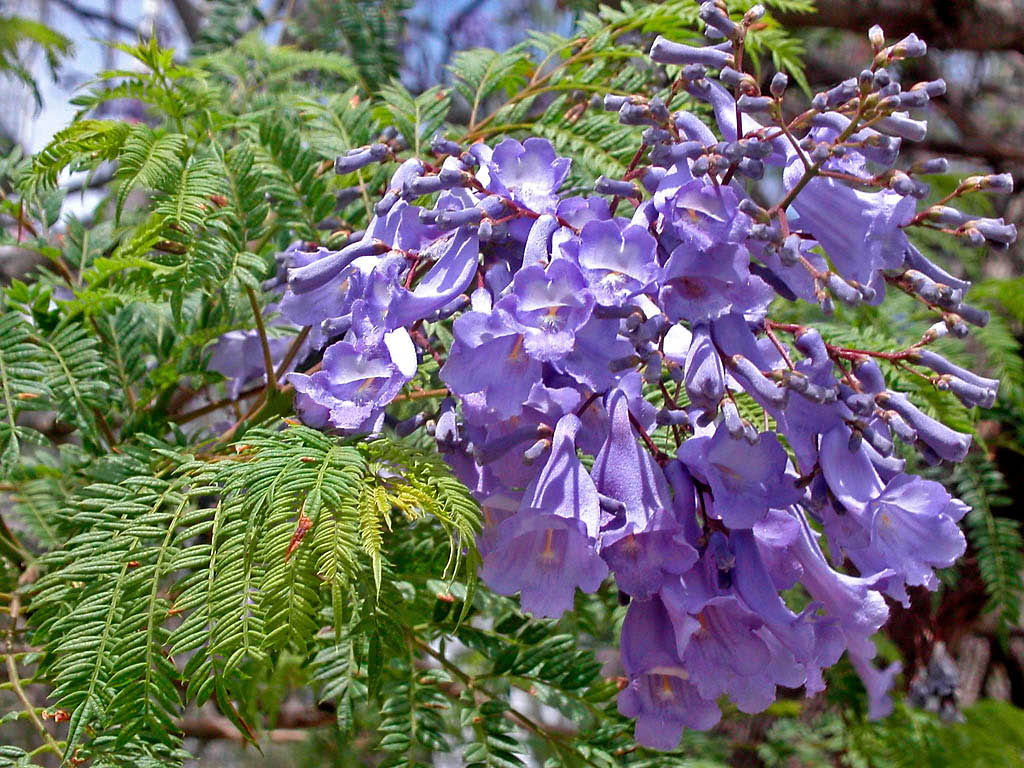 "Jacaranda" (pronounced IPA| [ʒa.ka.ˈran.da] , IPA| [ha.ka.ˈran.da] , or IPA| [ˌdʒæk.ə.ˈran.də] ) is a of 49 species of s in the family , native to tropical and subtropical regions of South and , , and the . The genus name is also used as the common name. In many parts of the world, such as and , the blooming of this tree is welcomed as a sign of spring.

The species are s to large s ranging in size from 2 to 30 m tall. The leaves are in most species, pinnate or simple in a few species. The s are produced in conspicuous large s, each flower with a five-lobed blue to purple-blue corolla; a few species have white flowers. The is an oblong to oval flattened capsule containing numerous slender s. The genus differs from other genera in the Bignoniaceae in having a that is longer than the s, tricolpate , and a number of 18.

The genus is divided into two sections, sect. "Jacaranda" (syn. sect. "Monolobos", an invalid name as it includes the type species of the genus, "J. caerulea") and sect. "Dilobos" DC., based on the number of e on the s. Sect. "Jacaranda" (which includes Blue Jacarandas) has 18 species and is found primarily in western , , , and the . Sect. "Dilobos", which is believed to be the primitive form, has 31 species and is found primarily in southeastern including the valley. The anatomy of the in the two sections also differs. Although usually treated in sect. "Jacaranda", "J. copaia" differs somewhat from all other members of the genus, and may be intermediate between the two sections (Dos Santos & Miller 1997).

Several species are widely grown as s throughout the subtropical regions of the world, valued for their intense flower displays. The most often seen is the "Jacaranda mimosifolia" (syn. "J. acutifolia" hort. non Bonpl.). Other members of the genus are also commercially important; for example the Copaia ("Jacaranda copaia") is important for its because of its exceptionally long bole.

in is popularly known as The Jacaranda City due to the enormous number of Jacaranda trees planted as street trees and in parks and gardens. In flowering time the city appears blue/purple in colour when seen from the nearby hills because of all the Jacaranda trees. The time of year the Jacarandas bloom in Pretoria, coincide with the year-end exams at the and legend has it that if a flower from the Jacaranda tree drops on your head, you will pass all your exams. Other towns and cities in South Africa have Jacaranda trees, but none produce such a show as that of Pretoria.

The city of in has a local reputation of having a significant population of Jacaranda trees. The in the city's inner west has a very high concentration of the tree, and due to the impressive display of purple flowers in mid-Spring, which wind up littering vast sections of the , local claims that "one won't start studying for exams until the jacarandas have molted". At Sydney University there exists a similar expression "by the time the jacaranda in the main quadrangle flowers, it's too late to start studying for exams".

This has led to the slang name "exam tree" being attached to the plant. At the students even maintain a joke superstition that if a Jacaranda bloom falls on their head during exam time, they will fail an exam. The bad luck can be broken by catching another bloom before it hits the ground.

The reason for the Jacaranda's proliferation in Brisbane is often attributed to the thirties and forties, when new mothers leaving the maternity hospital were given a jacaranda sapling to plant.

Jacarandas in bloom have become closely associated with Brisbane and South East Queensland. The Brisbane City Council have used jacarandas to line avenues, and commercial developments in some areas, particularly along the have incorporated jacarandas into their landscape design. The trees are common in parks throughout the city, most notably in a long curved avenue in the inner city New Farm Park, in Goodna, and in private gardens. Brisbane's hilly geography allows views of the city and suburbs in which the brightly coloured flowers can be easily seen for miles. The jacaranda has become so much a part of the city's identity that contemporary art, particularly of streetscapes, often incorporates the flowering jacaranda, despite the fact that it only flowers for approximately six weeks from September through October.

The city of Grafton on the north coast of , Australia, is also famous for its Jacarandas. Every October the city has a Jacaranda festival during the period of full bloom. A street parade, local public holiday and a series of events are held. A local public holiday sees the city's businesses perform street theatre for passers by and street stalls proliferate. A Jacaranda Queen and Jacaranda Princess are named at a formal ball.

Jacarandas are also popular in south and the southwestern , notably in and . Jacaranda can be found throughout most of southern , where they were imported by the horticulturalist . In California, jacarandas are known as the trees that bloom twice a year, although the fall bloom is generally not as striking as the spring bloom. Tampa, St. Petersburg, and other southern Florida cities are ribboned by purple flowers during peak bloom of April. Jacaranda trees are principally found in parks and interspersed along the avenues and streets. Jacarandas were introduced to Israel over 50 years ago, where they are in full bloom during May. They are popular and can be found in cities all over Israel.