The Festival was promoted and initiated with three pre-festival commissions. The first of these took place in November 2005, when Gorillaz performed live at the Manchester Opera House. Recordings of these performances were later released as the Demon Days Live DVD. The second was The Schools Festival Song, a new piece by Ennio Morricone and Nicholas Royle sung by an 8,000-strong schools' choir, organised by Young Voices, which took place on December 4, 2006.

The third was an art installation, in conjunction with the Imperial War Museum, by Turner Prize-winning artist Steve McQueen, as a response to the 2003 Iraq war and as a tribute to British service personnel killed in that conflict. It was exhibited in the Great Hall of Manchester Central Library from February 28 to July 15, 2007.

The first edition of the Festival ran from 28 June - 15 July 2007. The Festival's showpiece production was Monkey: Journey To The West, a re-working of the ancient Chinese legend Journey to the West by Damon Albarn and Jamie Hewlett, who are collaborating on their first major project since Gorillaz. Albarn wrote the score while Hewlett designed the set and costumes.[1] Adapted and directed by Chen Shi-Zheng, whose credits range from classical Chinese opera to the forthcoming Meryl Streep movie Dark Matter, the show also featured 45 Chinese circus acrobats, Shaolin monks and Chinese vocalists. The production was designed and created by Théâtre du Châtelet in co-operation with the Manchester International Festival and the Berlin State Opera, and performed at the Palace Theatre.

As well as Monkey, the Festival also showcased two other events. The first is Il Tempo del Postino, a visual arts show curated by Hans Ulrich Obrist and Philippe Parreno and produced in conjunction with the Théâtre du Châtelet, Paris, performed at the Manchester Opera House. The other was a new stage adaptation of The Pianist, combining the original words of Władysław Szpilman spoken by actor Peter Guinness, with the music of Frederic Chopin performed by leading pianist Mikhail Rudy, and directed by Neil Bartlett at the Museum of Science and Industry in Manchester.[2] 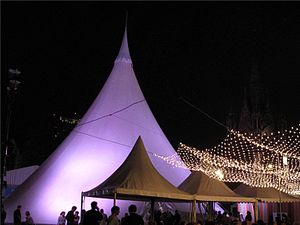 The 2009 Manchester International Festival pavilion at night in Albert Square. The silhoutte of the Town Hall in the distance is vaguely visible in the right of the picture.

The 2009 edition of the festival took place from 2–19 July 2009; in October 2008, a press release announced the first three commissions for 2009.[3] These are Prima Donna, Rufus Wainwright's debut opera, Everybody Loves a Winner, a "new theatrical experience" by director Neil Bartlett, and a "unique environment within Manchester Art Gallery" for solo piano, violin and cello JS Bach works, created by Zaha Hadid Architects.

The entire festival programme featuring more than 20 commissions was announced in March 2009. It includes Kraftwerk and a Steve Reich commission being performed at the Manchester Velodrome, performance art by Marina Abramović at the Whitworth Art Gallery, a procession along Deansgate organised by Jeremy Deller and a collaboration between Elbow and The Hallé orchestra.[4] Manchester alternative rock band Epiphany are also appearing as part of the procession. The festival will also feature It Felt Like A Kiss, a multimedia production created by documentary-maker Adam Curtis, Damon Albarn and Punchdrunk theatre company.

Other performers included De La Soul, Lou Reed and Laurie Anderson, Antony and the Johnsons with the Manchester Camerata, Carlos Acosta and The Durutti Column, performing a tribute to the late Tony Wilson.

The 2011 edition of the festival ran from 30 June to 17 July 2011 and featured artists and performers such as Björk, Damon Albarn, Snoop Dogg, Marina Abramovic, Victoria Wood, WU LYF, D/R/U/G/S and Air Cav[5][6], along with the Punchdrunk work The Crash of the Elysium.[7] Björk began the 2011 festival, with the live debut of her new album Biophilia,[8] with Dave Simpson of The Guardian stating that she "provided a stunning visual display", adding that "the Icelandic singer made a typically eye-popping entrance on huge platform shoes and sporting blue and white facepaint".[9] Sinéad O'Connor also performed at the festival, earning favourable reviews; Pamela Owen of the Daily Mail, whilst acknowledging that "she clearly wowed the audience", however, criticised her "dowdy" appearance and described her as wearing a "mumsy trouser-suit".[10]

Damon Albarn debuted his opera Doctor Dee, based on the life of Elizabethan scientist and philosopher John Dee, at the Palace Theatre. Directed by Rufus Norris, the production was described as "by no means an opera in the conventional sense" by The Guardian's Alfred Hickling, who described Dr Dee as "an erudite affair", giving it four stars.[11]