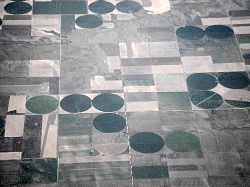 Farmland in the USA. The round fields are due to the use of center pivot irrigation 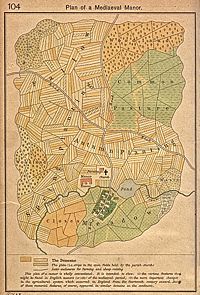 Typical plan of a mediaeval English manor, showing the use of field strips

A farm is an area of land, or, for aquaculture, lake, river or sea, including various structures, devoted primarily to the practice of producing and managing food (produce, grains, or livestock), fibres and, increasingly, fuel. It is the basic production facility in food production.[1] Farms may be owned and operated by a single individual, family, community, corporation or a company. A farm can be a holding of any size from a fraction of a hectare[2] to several thousand hectares.[3]

There are two unrelated etymologies for the term "farm:"

The word in the sense of an agricultural land-holding derives from the verb "to farm" a revenue source, whether taxes, customs, rents of a group of manors or simply to hold an individual manor by the feudal land tenure of "fee farm". The word is from the mediaeval Latin noun firma, also the source of the French word ferme, meaning a fixed agreement, contract, [4] from the classical Latin adjective firmus-a-um meaning strong, stout, firm.[5] As in the mediaeval age virtually all manors were engaged in the business of agriculture, which was their principal revenue source, so to hold a manor by the tenure of "fee farm" became synonymous with the practice of agriculture itself.

An alternative etymology states the word farm comes from Old English feorm, farm ("provision, stores of food, supplies, possessions; provisions supplied to the king or a lord by a tenant or vassal; rent, feast, benefit, assylum"), from Proto-Germanic *firmō, *firχumō ("means of living, subsistence"), from Proto-Indo-European *perkwu- ("life, strength, force"). It is related to other Old English words such as feormehām ("farm"), feormere ("purveyor, grocer"), feormian ("to provision, sustain"), and feorh ("life, spirit").[6][7] 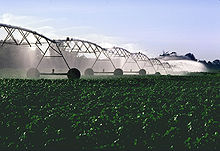 The term farming covers a wide spectrum of agricultural production work. At one end of this spectrum is the subsistence farmer, who farms a small area with limited resource inputs, and produces only enough food to meet the needs of his family. At the other end is commercial intensive agriculture, including industrial agriculture. Such farming involves large fields and/or numbers of animals, large resource inputs (pesticides, fertilizers, etc.), and a high level of mechanization. These operations generally attempt to maximize financial income from grain, produce, or livestock.

Traditionally, the goal of farming was to work collectively as a community to grow and harvest crops that could be grown in mass such as wheat, maize, squash, and other cash crops. Centuries later these same farmers took charge of livestock, and began growing food exclusively for the feeding of livestock as well as for the community. With the growth of civilization the farmer's focus changed from basic survival to that of financial gain. In smaller towns on the outset of civilization the farmer did retain the need to grow their own food, but the financially minded farmer was largely spreading. With the Renaissance came the plantation, a farm primarily worked by others primarily for the gain of the plantation's owner. Then came a new age of industry where the farm could be staffed by fewer people and big machines. This meant a complete revolution for farming.

A business producing tree fruits or nuts is called an orchard; a vineyard produces grapes. The stable is used for operations principally involved in the training of horses. Stud and commercial farms breed and produce other animals and livestock. A farm that is primarily used for the production of milk and dairy is a dairy farm. A market garden or truck farm is a farm that grows vegetables, but little or no grain. Additional specialty farms include fish farms, which raise fish in captivity as a food source, and tree farms, which grow trees for sale for transplant, lumber, or decorative use. A plantation is usually a large farm or estate, on which cotton, tobacco, coffee or sugar cane, are cultivated, often by resident laborers.[citation needed] 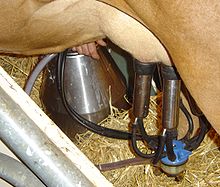 A milking machine in action

Dairy farming is a class of agriculture, where female cattle, goats, or other mammals are raised for their milk, which may be either processed on-site or transported to a dairy for processing and eventual retail sale.

In most Western countries, a centralized dairy facility processes milk and dairy products, such as cream, butter, and cheese. In the United States, these dairies are usually local companies, while in the southern hemisphere facilities may be run by very large nationwide or trans-national corporations (such as Fonterra).

Dairy farms generally sell the male calves borne by their mothers for veal meat, as dairy breeds are not normally satisfactory for commercial beef production. Many dairy farms also grow their own feed, typically including corn, alfalfa, and hay. This is fed directly to the cows, or stored as silage for use during the winter season. Additional dietary supplements are added to the feed to improve milk production. [8]

Poultry farms are devoted to raising chickens, turkeys, ducks, and other fowl, generally for meat or eggs.[9][10][11]

Prison farms are farms which serve as prisons for persons sentenced to hard labor by a court. On prison farms inmates run the important tasks of a farm, producing crops.[12] 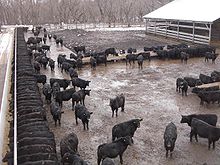 Farm control and ownership has traditionally been a key indicator of status and power, especially in agrarian societies.[citation needed] The distribution of farm ownership has historically been closely linked to form of government. Medieval feudalism was essentially a system that centralized control of farmland, control of farm labor and political power, while the early American democracy, in which land ownership was a prerequisite for voting rights, was built on relatively easy paths to individual farm ownership. However, the gradual modernization and mechanization of farming, which greatly increases both the efficiency and capital requirements of farming, has led to increasingly large farms. This has usually been accompanied by the decoupling of political power from farm ownership.

In some societies (especially socialist and communist), collective farming is the norm, with either government ownership of the land or common ownership by a local group. Especially in societies without widespread industrialized farming, tenant farming and sharecropping are common; farmers either pay landowners for the right to use farmland or give up a portion of the crops. 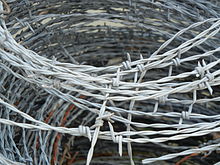 Farms around the world

Cows grazing on a farm in Victoria, Australia

Farming is a significant economic sector in Australia. A farm is an area of land used for primary production which will include buildings.

Where most of the income is from some other employment, and the farm is really an expanded residence, the term hobby farm is common. This will allow sufficient size for recreational use but be very unlikely to produce sufficient income to be self-sustaining. Hobby farms are commonly around 5 acres (20,000 m2) but may be much larger depending upon land prices (which vary regionally).

Often very small farms used for intensive primary production are referred to by the specialization they are being used for, such as a dairy rather than a dairy farm, a piggery, a market garden, etc. This also applies to feedlots, which are specifically developed to a single purpose and are often not able to be used for more general purpose (mixed) farming practices.

In remote areas farms can become quite large. As with estates in England, there is no defined size or method of operation at which a large farm becomes a station.

Regardless of size, the term station is only used for farms where the main activity is grazing. Some cotton farms in north-western New South Wales or south-western Queensland have been formed by combining previous sheep stations once sufficient water has become available to allow cotton to be grown.

In the UK, farm as an agricultural unit, always denotes the area of pasture and other fields together with its farmhouse, farmyard and outbuildings. Very large farms, or groups of farms under the same ownership, may be called an estate. Conversely, a small farm surrounding the owner's dwelling is called a smallholding and is generally focused on self-sufficiency with only the surplus being sold.

Many farms have fallen into disrepair such as the ruins of Higher Hempshaw's" in Anglezarke, England 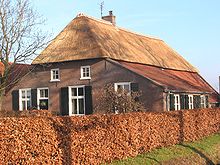 Farms require buildings to facilitate the action of farming the material at hand. Such buildings can include a farm house (for the farmers), a grain silo (for storing grain), and a barn (for the storing of certain animals.)