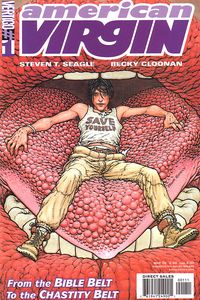 "American Virgin" was an American comic book series published by and written by and illustrated by . The series launched on a monthly schedule in March 2006 and was canceled two years later, despite rave reviews. Seagle was able to finish his storyline.

The story follows the life of Adam, a teenager who is a , and his struggle with issues his sexuality and faith. Adam's near constant companion is a stepsister, Cyndi, who is far less sexually repressed.

The covers for the first three issues were penciled by , issues #4-#14 featured covers by , and starting with issue #15 the cover artist is . The entire series is penciled by Becky Cloonan.

The first story arc "Head" introduces the main characterAdam Chamberlain, a 21-year-old Christian preacher promoting until marriage. Adam is proud of his virginity and his engagement to his girlfriend Cassie, currently on a mission in ; he believes she was chosen by to be his wife. After being taunted with a stripper by his cousins, Adam flees to the home of his stepsister Cyndi. While watching television he learns that Cassie has been killed and beheaded by s.

Adam and Cyndi flee her home when two men enter looking for her and open fire with pistols. Adam then finds his younger brother at home, about to have sex with a girl. They have a confrontation and then Adam informs his mother and stepfather that he is going to Africa to find out what happened to Cassie. He and Cyndi fly to , where Adam sees Cassie's body and has a breakdown.

"Going Down" begins with Adam returning home. Cyndi returns to her apartment, where the drug dealers who had previously tried to kill her are waiting. They hold her at gunpoint, but Mel saves her, knocking the men out. Adam deliversthe at Cassie's funeral but has another breakdown and a highly sexual vision of a naked Cassie rising up from her coffin. Afterwards he is propositioned by a young woman who wants to lose her virginity with him, but he refuses. Mel appears and tells him that he has found information on the mastermind behind Cassie's murder.

Adam, Cyndi and Mel travel to , where they continue Adam's book tour. They stay with brother and sister Deacon and Clauda, and Adam discovers that Deacon is . Outside one of Adam's speeches, he has another strange encounter with a reporter, who mocks him. Adam speaks of the reporter, Alex, in his speech and reduces her to tears. Afterward Mel shows up with video of Cassie's execution. Adam views it and has another vision of Cassie.

Adam finds the executioner at a gay club and goes undercover to get him to confess. After taking Adam with him to the dungeon, the killer discovers who Adam is and threatens to kill him if they ever meet again before making his escape. Adam flees but discovers from his agent the next day that he has been seen and outed as a homosexual.

Adam becomes distraught over people thinking he is gay and has a revealing conversation with Deacon that examines both Deacon's thoughts on God and Adam's thoughts on homosexuality. Adam then learns that Mel has had a personal score with the same terrorists who killed Cassie and has been using him the whole time for information. He confronts Mel outside the hotel room that the killer is staying and knocks him unconscious. Adam then tries to finish the job of the executioner himself. He can't bring himself to do it, however, and almost ends up dead, if not for Mel arriving at the nick of time and shooting the killer in the head. Adam and Cyndi then take a flight home, but their plane crashes into the ocean.

The first issue of this story arc deals with Adam's past and ends with his revelation that Cassie may not have been the girl God intended for him. The second sees Adam returning to his ministry in the aftermath of the plane crash. He begins to search for the other girls he believes God may have intended for him to be with, which leads him to his uncle's mansion, where he is forced to join in one of his uncle's sex games and meets the first girl on the list.

After that he has a talk with his step father about the he did in his younger years. When they get to the hospital to visit Cyndi, they find that she has been taken and they must find her. Before he is able to start looking his brother Levi shows him the second girl on his list and discovers that she is not his "soul mate". Back at his house he finds that Cyndi wasn't taken, but saved from the people looking for her by Mel. Adam finds out that this is because she stole a porno tape she had made to prevent its release.

Adam returns to the pageant, and he sees the woman that he thought he saved him from the plane crash working there. Cyndi and Mel are in the pool house kissing when she tears open his shirt to find that Mel is and was born a woman, just before a hurricane arrives and knocks over the pool house. The hurricane also knocks down the pageant hall before they can get started, but not before he sees another vision of Cassie telling him in fact that Vanessa was not actually on the plane but was a vision from God telling him who his soul mate was. He then decides to join Vanessa on a tour around the world to find herself.

Around the world begins in where Adam and Vanessa have gone for . After Adam goes to the beach only to see that Vanessa is topless (a small error by the writer, since public isn't allowed in , except inside beaches, which are few and isolated).This deeply disturbs him, and he runs off to call Cyndi. Unbeknownst to him, she is currently having sex with Mel, because Cyndi has decided she loves him even though he is transgender. Adam and Vanessa next go to to stay with Vanessa's college roommate and go to the Festival of the Iron Phallus, a festival dedicated to the which Adam sees as obscene but eventually comes to realize that different cultures have different taboos. When they arrive in , Adam books a hotel room for him and Vanessa, breaking Vanessa's rule to not spend money on anything, so she storms off. Adam calls home for advice and Mel tells him to go and see a artist in . While getting the Adam has a vision, in which he and Cassie finally have sex. Later on Adam decides to have is first realistic sexual experience with Vanessa, deciding that she is his real love, not Cassie.