The Group of Eight (G8, and formerly the G6 or Group of Six then G7) is a forum, created by France in 1975,[1] for the governments of seven major economies: Canada, France, Germany, Italy, Japan, the United Kingdom, and the United States. In 1997, the group added Russia, thus becoming the G8. In addition, the European Union is represented within the G8, but cannot host or chair.[2] "G8" can refer to the member states or to the annual summit meeting of the G8 heads of government. The former term, G6, is now frequently applied to the six most populous countries within the European Union. G8 ministers also meet throughout the year, such as the G7/8 finance ministers (who meet four times a year), G8 foreign ministers, or G8 environment ministers.

Collectively, the G8 nations comprise 53.0% of global nominal GDP and 42.5% of global GDP (PPP). Each calendar year, the responsibility of hosting the G8 rotates through the member states in the following order: France, United States, United Kingdom, Russia, Germany, Japan, Italy, and Canada. The holder of the presidency sets the agenda, hosts the summit for that year, and determines which ministerial meetings will take place. Lately, both France and the United Kingdom have expressed a desire to expand the group to include five developing countries, referred to as the Outreach Five (O5) or the Plus Five: Brazil, People's Republic of China, India, Mexico, and South Africa. These countries have participated as guests in previous meetings, which are sometimes called G8+5.

With the G-20 major economies growing in stature since the 2008 Washington summit, world leaders from the group announced at their Pittsburgh summit on September 25, 2009, that the group will replace the G8 as the main economic council of wealthy nations.[3][4]

The concept of a forum for the world's major industrialized democracies emerged following the 1973 oil crisis. In 1974, a series of meetings in the library of the White House in Washington, D.C. was known as the "Library Group".[5] This was an informal gathering of senior financial officials from the United States, the United Kingdom, West Germany, Japan and France.[6] In 1975, French President Valéry Giscard d'Estaing invited the heads of government from West Germany, Italy, Japan, the United Kingdom and the United States to a summit in Château de Rambouillet. The six leaders agreed to an annual meeting organized under a rotating presidency, forming the Group of Six (G6). The following year, Canada joined the group at the behest of Germany's Chancellor Helmut Schmidt and U.S. President Gerald Ford[7] and the group became the Group of Seven (G7). The European Union is represented by the President of the European Commission and the leader of the country that holds the Presidency of the Council of the European Union. The President of the European Commission has attended all meetings since it was first invited by the United Kingdom in 1977[8] and the Council President now also regularly attends.

Following 1994's G7 summit in Naples, Russian officials held separate meetings with leaders of the G7 after the group's summits. This informal arrangement was dubbed the Political 8 (P8) – or, colloquially, the G7+1. At the invitation of Prime Minister of the United Kingdom Tony Blair and President of the United States Bill Clinton,[9] Russia formally joined the group in 1997, resulting in the Group of Eight, or G8. 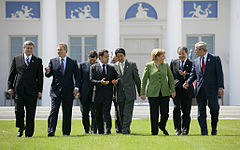 By design, the G8 deliberately lacks an administrative structure like those for international organizations, such as the United Nations or the World Bank. The group does not have a permanent secretariat, or offices for its members.

The presidency of the group rotates annually among the member countries, with each new term beginning on 1 January of the year. The country holding the presidency is responsible for planning and hosting a series of ministerial-level meetings, leading up to a mid-year summit attended by the heads of government. The president of the European Commission participates as an equal in all summit events.[10]

The ministerial meetings bring together ministers responsible for various portfolios to discuss issues of mutual or global concern. The range of topics include health, law enforcement, labor, economic and social development, energy, environment, foreign affairs, justice and interior, terrorism, and trade. There are also a separate set of meetings known as the G8+5, created during the 2005 Gleneagles, Scotland summit, that is attended by finance and energy ministers from all eight member countries in addition to the five "outreach countries" which are also known as the Group of Five — Brazil, People's Republic of China, India, Mexico, and South Africa.[11]

In June 2005, justice ministers and interior ministers from the G8 countries agreed to launch an international database on pedophiles.[12] The G8 officials also agreed to pool data on terrorism, subject to restrictions by privacy and security laws in individual countries.[13] 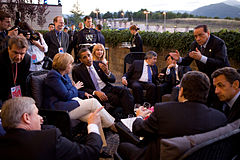 G8 leaders confer during the 2009 summit in L'Aquila (Abruzzo, Italy).

At the Heiligendamm Summit in 2007, the G8 acknowledged a proposal from the EU for a worldwide initiative on efficient energy use. They agreed to explore, along with the International Energy Agency, the most effective means to promote energy efficiency internationally. A year later, on 8 June 2008, the G8 along with China, India, South Korea and the European Community established the International Partnership for Energy Efficiency Cooperation, at the Energy Ministerial meeting hosted by Japan holding 2008 G8 Presidency, in Aomori.[14]

G8 Finance Ministers, whilst in preparation for the 34th Summit of the G8 Heads of State and Government in Toyako, Hokkaido, met on the 13 and 14 June 2008, in Osaka, Japan. They agreed to the “G8 Action Plan for Climate Change to Enhance the Engagement of Private and Public Financial Institutions.” In closing, Ministers supported the launch of new Climate Investment Funds (CIFs) by the World Bank, which will help existing efforts until a new framework under the UNFCCC is implemented after 2012.[15]

The annual G8 leaders summit is attended by the heads of government[16] The member country holding the G8 presidency is responsible for organizing and hosting the year's summit.

The serial annual summits can be parsed chronologically in arguably distinct ways, including as the sequence of host countries for the summits has recurred over time, series, etc.[17]

The leaders of the G8 at 36th G8 Summit in Huntsville, Ontario

All eight of the G8 countries are amongst the thirteen top-ranked leading export countries.[43] The USA, Germany, Italy, France, Russia and Japan are among the top 10 countries with the largest gold reserves. Some of the world's 18 largest major stock exchanges by traded value and market capitalization are in G8 countries (U.S., Japan, UK, Canada, Germany, Russia.) G8 countries are represented in the top eleven economies (by nominal GDP) of the world, according to latest (2010 data) International Monetary Fund's statistics. Also, five countries of the G8 have nominal GDP per capita above US$40,000. (USA, Canada, Japan, France, Germany), from the same 2010 IMF data. The G8 nations also have some of the world's largest, most technologically advanced, and most powerful militaries. Four of the eight nations are armed with nuclear weapons (France, Russia, UK, USA), three others have the capability to rapidly produce nuclear warheads (Canada, Germany, Japan), and some have nuclear weapons sharing programs (Canada, Germany, Italy).[44][45][46]

A few of the world's 10 largest oil producers (Russia, USA, and Canada) and the countries with the third and eighth largest oil reserves (Canada and Russia respectively) are in the G8. Seven of the nine largest nuclear energy producers are in the G8 (USA, France, Japan, Russia, Germany, Canada, UK), even though Germany will wean itself from nuclear power by 2022.[47] The 7 largest donors to the UN budget for the 2011 annual fiscal year are in the G8 (U.S., Japan, Germany, UK, France, Italy, Canada.) The G8 and the BRIC countries makes up almost all of the 15-nation "trillion dollar club of nations." All of the G8 and G8+5 countries (minus South Africa) are in the top twenty nations that are ranked by the amount of voting power and Special Drawing Rights (SDRs) in the IMF organization.

Stephen Harper and Nicolas Sarkozy, the 36th and 37th chairs of the G8 Summit

20 July 2001, 27th G8 summit in Genoa, Italy: Protesters burn a police vehicle which was abandoned by police during a clash with protesters.

The G8's relevance is unclear.[52] Each of the 36 G8 summit meetings could have been called a success if the events had been re-framed as venues to generate additional momentum for solving problems at the other multilateral conferences that meet throughout the year. The G8 annual summit sets the stage for what needs to be done and establishes an idea of how to do it, even if that idea is, at best, rough and patchy.[16]

Some criticism centres on the assertion that members of G8 do not do enough to help global problems e.g. debt, global warming and the AIDS problem – due to strict medicine patent policy and other issues related to globalization.

The group has also been criticized for its membership, which critics argue has now become unrepresentative of the world's most powerful economies. In particular, China has surpassed every economy except the United States,[53] while Brazil has surpassed Canada and Italy (according to the IMF) and India has surpassed Russia.