Nordmann Fir (Abies nordmanniana) is a fir native to the mountains south and east of the Black Sea, in Turkey, Georgia, Russian Caucasus and northern parts of Armenia. It occurs at altitudes of 900-2,200 m on mountains with a rainfall of over 1,000 mm.

It is a large evergreen coniferous tree growing to 60 m tall and with a trunk diameter of up to 2 m. In the Western Caucasus Reserve, some specimens have been reported to be 78 m and even 85 m tall,[2] the tallest trees in Europe.

The leaves are needle-like, flattened, 1.8-3.5 cm long and 2 mm wide by 0.5 mm thick, glossy dark green above, and with two blue-white bands of stomata below. The tip of the leaf is usually blunt, often slightly notched at the tip, but can be pointed, particularly on strong-growing shoots on young trees. The cones are 10-20 cm long and 4-5 cm broad, with about 150-200 scales, each scale with an exserted bract and two winged seeds; they disintegrate when mature to release the seeds.

There are two subspecies (treated as distinct species by some botanists), intergrading where they meet in northern Turkey at about 36°E longitude:

The species is named after Finnish zoologist Alexander von Nordmann (1803-1866), Professor of Botany at Odessa. 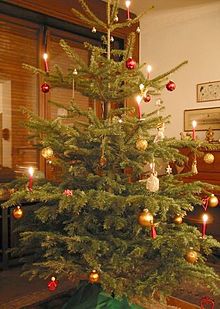 Nordmann Fir as a Christmas tree

Nordmann Fir is one of the most important species grown for Christmas trees, being favoured for its attractive foliage, with needles that are not sharp, and do not drop readily when the tree dries out.

It is also a popular ornamental tree in parks and large gardens.

The wood is soft and white, and is used for general construction, paper, etc.