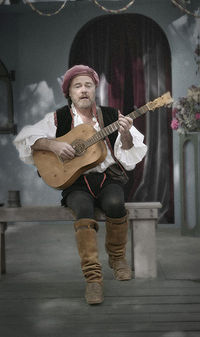 Owain Phyfe is a vocalist, instrumentalist, composer, and the founder of Nightwatch Recording, which concentrates on Renaissance and Medieval music.

Phyfe grew up in a bilingual family with Welsh as a second language. Nourished by his grandparent's appreciation for song, Phyfe's study of languages in college and his travels abroad to England, France, and Spain as well as his experience later as a musician in New York City's Greenwich Village led to finding his own Renaissance spirit.[1]

In the mid-1980s, Phyfe and his wife Paula became festival performers at the Michigan Renaissance Festival. Spellbound by early music, Phyfe decided to develop a "singer of songs" persona. While researching late medieval and renaissance music, he found himself favoring faire life over the automotive engineering company he had started in 1983. "It became my dream to present the beauty of Renaissance music," Phyfe explained, "not as a documentary, but as a living expression."[1]

He teamed up with the magical Renaissance Fair jam band CANTIGA in 1990 to form The New World Renaissance Band, specializing in the performance of ancient music in English, Spanish, Italian, Welsh, German, French, Provençal and Latin. He plays many traditional instruments including recorders, viola, cello, fiddle, and harp. He has performed across the U.S.,[2] and his music has aired worldwide and on over 250 radio stations across North America. He has performed and offered workshops at many medieval recreationist, musical and Neo-Pagan events including the S.C.A.'s Pennsic War,[3] the Michigan Renaissance Festival,[4] Sirius Rising, Pagan Spirit Gathering[5] and the Starwood Festival,[6] both as a soloist and with the New World Renaissance Band.