The Nokia N95 (N95-1, internally known as RM-159) is a smartphone produced by Nokia as part of their Nseries line of portable devices. It was released in 2007. The N95 runs Symbian OS v9.2, with a S60 3rd Edition user interface. The phone has a two-way sliding mechanism, which can be used to access either media playback buttons or a numeric keypad. It was first released in silver and later on in black, with limited edition quantities in gold and purple.

Its capabilities include[1][2]: a Global Positioning System receiver with maps and optional turn-by-turn navigation; a 5 megapixel digital camera with Carl Zeiss optics, flash, video recording and video conferencing; wireless connectivity via HSDPA, IrDA, 802.11x and Bluetooth; a portable media player with the ability to download podcasts over the air; a FM Radio tuner; Composite Video output via included cable; multi-tasking to allow several applications to run simultaneously; a web browser with support for HTML, JavaScript and Adobe Flash; messaging via SMS, MMS and e-mail; Office suite and organizer functions; and the ability to install and run third party Java ME or Symbian mobile applications.

Since the introduction of the original N95-1, several updated versions have been released as well: The N95 8GB with 8 gigabytes of internal storage and a larger display, the N95 NAM and the N95 8GB NAM with support for North American UMTS (3G) bands, and finally the lower cost N95-5 and N95-6 for the Chinese market. On the release date in 2007, the phone cost close to 350 euros, roughly about 500 US dollars. Even with the release of many more Nseries phones, the current retail price is still rounding the 400 $US,[3] about 300€.

The phone was unveiled in September 2006 and was released at the end of March 2007.

On March 8, 2007 Nokia was shipping N95 in key European, Asian and Middle Eastern markets.[4] It was on sale in many countries on the week of March 11.

On August 29, 2007, two updated versions of the N95 were announced at a press event in London; first, the N95-2 (N95 8 GB), an updated version for the European/Asian markets with 8 gigabytes of internal storage and larger screen;[7][8][9][10] secondly, the N95-3 (N95 NAM), replacing the original 2100 MHz W-CDMA air interface with support for the 850 MHz and 1900 MHz frequencies used for the 3G networks of most GSM-compatible mobile carriers in the Americas, including AT&T Mobility.

The N95 contains an integrated GPS receiver which is located below the 0 key on the keypad. The phone ships with Nokia Maps navigation software. This phone is not yet on the list of smartphones that Nokia is giving a free lifetime of voice navigation for.

Out of the box, the N95 supports audio in MP3, WMA, RealAudio, SP-MIDI, AAC+, eAAC+, MIDI, AMR and M4A formats. Its two-way slide, when opened towards the keypad, allows access to its media playback buttons. A standard 3.5 mm jack is located on the left side of the phone and allows the user to connect any standard headphones to the unit. Users can also use Bluetooth for audio output using A2DP, or use the built-in stereo speakers. The N95 is also capable of playing video in 3GP, MPEG4, RealVideo and in newer firmware, Flash Video formats. All of the phone's video output can also be played through the TV-out feature. TV-out is a feature offered by the phones OMAP processor, that allows users to connect the smartphone, using the supplied cable, to a TV or any other composite video input. Its main purpose is to allow users to show photos and videos on a large screen. The N95's built in UPnP capabilities also allow the user to share the phones' media over a WLAN network. This provides easy access to the photos, music and videos stored on the phone, from other UPnP capable devices on the network, enabling them to be watched or downloaded over the air.

The N95 has built-in Wi-Fi, with which it can access the Internet (through a 802.11b/g wireless network). The N95 can also connect to the Internet through a carrier packet data network such as UMTS, HSDPA, or EDGE. The webkit-based browser displays full web pages as opposed to simplified pages as on most other phones. Web pages may be viewed in portrait or landscape mode and automatic zooming is supported. The N95 also has built-in Bluetooth and works with wireless earpieces that use Bluetooth 2.0 technology and for file transfer.

It should be noted that the original N95 does not support US based versions of UMTS/HSDPA; UMTS features in these versions of the phone are disabled by default. Furthermore, the later N95 US versions support only AT&T's 850/1900 MHz UMTS/HSDPA bands, neither 1700 MHz of T-Mobile USA nor 2100 MHz bands are supported internationally.

The phone can also act as a WAN access point allowing a tethered PC access to a carrier's packet data network. VoIP software and functionality is also included with the phone (though some carriers have opted to remove this feature).

The N95 includes a built-in accelerometer. This was originally only used for video stabilization and photo orientation (to keep landscape or portrait shots oriented as taken).

Third-party programs have been created, including software that will automatically change the screen orientation when the phone is tilted, programs that simulate the sounds of a Star Wars lightsaber[15] when the phone is waved through the air, allow you to mute the phone by turning it face-down, and many more.

The N95 is compatible with the N-Gage mobile gaming service. 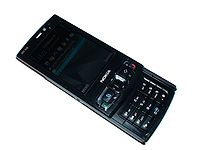 The changes compared to the regular version are:

The following was changed from the original version:

The main differences to the N95-2 are:

Featuring the internal name RM-245, the N95-5 is targeted at the Chinese market. The main difference from the regular N95 is the lack of any 3G connectivity support, which has not been yet adopted in China at the time of release,[22] and the absence of WLAN connectivity, due to Chinese regulations.

This table lists only the specifications that differ between versions of the N95 models.[23][24][25]